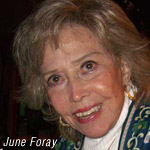 Legendary animation voice actress June Foray will be honored with the Outstanding Contribution in Animation Award, also known as The Crystal Anvil Award, at the UCLA School of Theater, Film & Television’s Festival of New Creative Work.

Foray will be presented the award at the festival’s Animation Prom, set for June 4 at the James Bridges Theater. The award to Foray, as well as the students awards, will be presented at the 5 p.m. screening; a second screening is set for 8:30 p.m.

Foray’s career as a voice actress for animation is the stuff of legend. She’s worked with such legendary animators as Walt Disney, Chuck Jones, Tex Avery, Friz Freleng, Walter Lantz, Hanna and Barbera and Jay Ward. Her credits range from Disney’s Cinderella and Peter Pan, to Cindy Lou Who in the TV special classic How the Grinch Stole Christmas, to The Smurfs, Who Framed Roger Rabbit? and Space Jam. She is perhaps best known, however, as the voice of Rocky the Flying Squirrel in the 1960s TV series The Rocky & Bullwinkle Show.

The festival is open to the public – for information on how to RSVP check the festival’s website at www.tft.ucla.edu/festival.