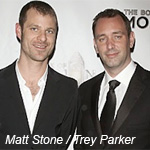 South Park creators Trey Parker and Matt Stone have launched their own production studio, Important Studios, in order to pursue film, TV and theater projects. Their upcoming slate includes a possible movie version of The Book of Mormon, says The New York Times.

Important Studios has an estimated value of $300 million based on revenue from Comedy Central hit series South Park, which is currently in its 16th season, and hit Broadway show The Book of Mormon.

“Having worked with several different studios over the years, we came to realize that our favorite people in the world are ourselves,” the Times quoted Parker and Stone.

Parker and Trey also received a $60 million investment from boutique investment bank Raine Group for a stake of approximately 20 percent. William Morris Endeavor is also an investor in Raine.

Stone told the Times that he hoped Steven Spielberg’s DreamWorks or George Lucas’ Lucasfilm would serve as models for Important Studios.

“In some ways it’s a stupid comparison. because they are gargantuan,” he told the paper. “We want to be a smaller, more humble version of that. If DreamWorks is Walmart, we are over here knitting sweaters.”

Book of Mormon has grossed more than $200 million. The New York production makes $1.6 million a week, the same amount a touring version makes. Another production in Chicago grosses $1.5 million a week, and the hit show will also tour to London in the near future. 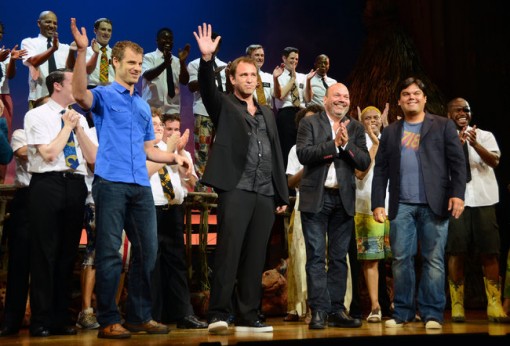 (from left) Matt Stone, Trey Parker, Casey Nicholaw and Robert Lopez at the
Los Angeles opening of The Book of Mormon.