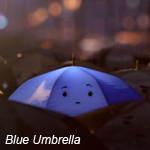 Disney has released a brief trailer for Pixar’s new short The Blue Umbrella, which will play in theaters with Monsters University beginning June 21, 2013. Directed by Saschka Unseld (layout artist on Toy Story 3, Cars 2 and Brave) and produced by Marc Greenberg. The official synopsis is as follows:

“It is just another evening commute until the rain starts to fall, and the city comes alive to the sound of dripping rain pipes, whistling awnings and gurgling gutters. And in the midst, two umbrellas—one blue, one not—fall eternally in love.”

According to The Wall Street Journal, the six-minute film features a score by composer Jon Brion and the voice of singer Sarah Jaffe.

“Pitching to John [Lasseter] is amazing,” Unseld  told WSJ. “When I told them the story, I could just see how they followed every word and how they imagined everything in their head how it would play out like a film.” The production took about a year and a half to produce and Lasseter gave him feedback every two to four weeks. “He’s fantastic as a test audience,” Unseld said. “He’s able to see the short as what it is at that point while forgetting all the iterations we went through.”

Unseld said he wanted the short to feel more like traditional animation from the early Disney 2D days.

“If the faces were in the umbrella in the cloth or raindrops, it would have felt weird. A stylized idea of faces with emotions made more sense.”

He said to get that look right without being distracting to viewers took awhile. The young director played with the exposure time of certain scenes, and filmed at 12 frames per second, to vary the rhythm and tone of rain strokes.

So, what do you think? Is it this year’s La Luna or is it even better?