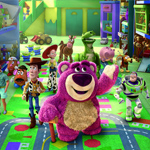 The film beat out challengers Despicable Me, How to Train Your Dragon, The Illusionist and Tangled for the top honor.

“Were you two even born when the first Toy Story came out?” joked Lee Unkrich, director of Toy Story 3, as he accepted the honor.