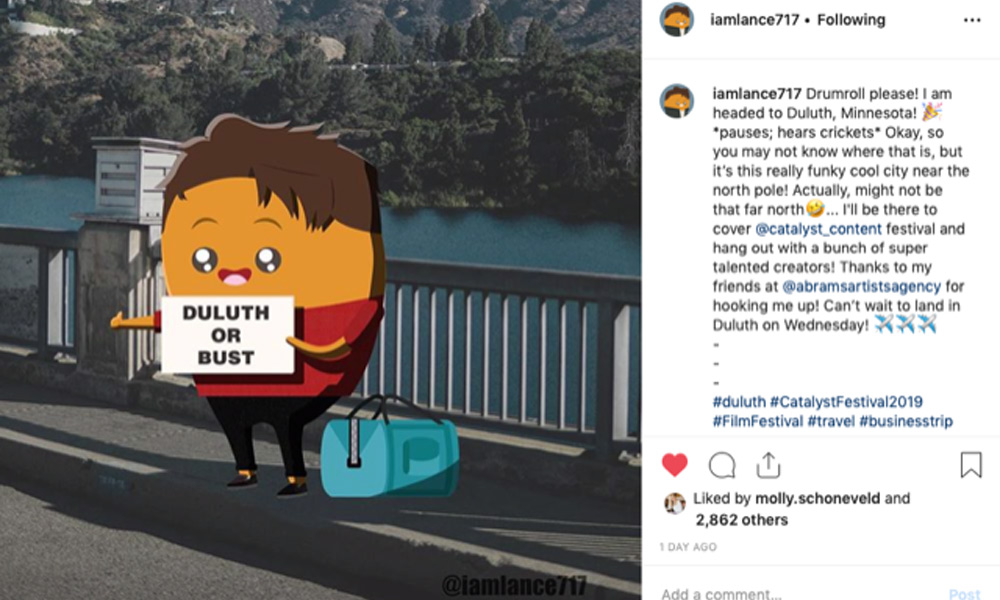 Celebrated actor and voice-over artist Nancy Cartwright — best known for voicing Bart Simpson on The Simpsons — has been selected to receive a Lifetime Achievement Award at this weekend’s Catalyst Content Festival, and the festival organizers have enlisted a “virtual influencer” named Lance to help get the word out about the event.

The cartoon TV correspondent Lance is a member of the Toonstar Network, a collective of virtual influencers which are animated digital identities for the creators behind them. All of the content is based on and created by real people, just like the world of traditional influencers, in a new category Toonstar calls “reality animation.”

Lance is an aspiring writer living in LA, and boasts almost 30,000 followers on Instagram. He is attending the Catalyst Content Festival to cover all the festivities from red carpet interviews to behind-the-scenes footage at the exclusive industry parties that are being produced by Los Angeles event planner Jeffrey Best.

Sponsored by Abrams Artists Agency, the Catalyst Content Festival runs Oct. 9-13, bringing together content creators from around the world with Hollywood executives and agents to the Midwestern arts hub of Duluth, Minnesota. The event marks the first time that a virtual influencer has been invited to cover a major content festival.

The collaboration leverages Toonstar’s production technology to create near-time and real-time animated content so that Lance’s festival coverage can be shared via social media platforms like Instagram and Snapchat as it happens. From a tech perspective, the amount of time it takes to create the content ranges from a couple minutes to less than two hours depending on format and length. Toonstar also has livestream capabilities that enables real-time animated broadcasting.

Lance’s latest post about getting to Duluth has received more than 18,000 views:

“I’ve finally made it to Duluth! Just got to my hotel and am getting ready to go explore! Hitting up Catalyst tomorrow! Had a crazy time getting here. Even got to meet the incomparable @nancy_cartwright on the plane! @catalyst_content and @abramsartistsagency are honoring her with Catalyst’s Lifetime Achievement Award! But the travel wasn’t all great…I ran into some trouble when I got to the airport…” – – – #travelwoes #travel #flightstory #flight #duluth #catalystcontent #cartoon #animation #nancycartwright