Write and draw every day. Work well with your peers. Get used to getting lots and lots of criticism, and put your work out there for everyone to see. These were only some of the helpful tips offered by animation veterans Butch Hartman (Fairly OddParents, Bunsen Is a Monster) Yvette Kaplan (Beavis and Butt-Head Do America, DuckTales), Bill Plympton (Your Face, Guard Dog) and C. Shannon Tindle (Kubo and the Two Strings, Coraline) during Animation Magazine’s 30th Anniversary panel at Comic-Con this past weekend.

The four industry movers and shakers discussed how they began their careers at a time when animation wasn’t as huge and prevalent today. Plympton pointed out that it was exactly 30 years ago that he made his first animated short, Your Face. “I lived in New York, and Animation Magazine used to be my bible,” said the indie filmmaker. “It was really interesting to read Animation Magazine so I could get the news from L.A. and find out what productions were happening there. I was fortunate because my first film was a success and was Oscar-nominated and I decided to leave my job as an illustrator and continue to make animated projects.”

Plympton, Kaplan and Hartman talked about how they forged ahead during times that there were few jobs available in the industry. Kaplan, who co-directed Beavis and Butt-Head Do America and is currently the timing director on Disney’s DuckTales noted, “My big decision in 1987 was that I decided to retire from animation after working on many animated commercials and finishing a full-length animated TV special called A Soldier’s Tale for PBS. There was no work out there. But then, after five years, I got contacted to work on a pilot for a studio called Nickelodeon which I didn’t know anything but. Nowadays, it’s quite different. Students are being pulled out of schools by the studios before they even graduate.”

Tindle talked about his experiences at CalArts and how he got one of his first jobs out of school working on the animated show Clerks, and making the transition from being the character designer for series such as Foster’s Home for Imaginary Friends to working on movies such as DreamWorks’ The Croods and LAIKA’s Coraline and Kubo and the Two Strings.

“Shannon grew up in Kentucky and I am from Michigan, so it doesn’t matter where you are, you can get to where you want by persevering,” noted Hartman. “I went to CalArts and while we had great teachers at the school, I learned more from the students than the teachers. It’s great to be in an environment of artists where you just geek out and learn from each other.”

“My first job out of school was working from Marvel Productions, and I thought it was going to be great because I got to draw Spider-Man and The Hulk, but they put me on My Little Pony,” shared Hartman. “I got fired because although I could draw my own stuff very well, I couldn’t dawn the ponies very well. Now I always tell people to work on learning a variety of styles., because you will get hired to do other people’s stuff.”

Plympton offered a different perspective. “I get a lot of young artists coming to me with their work which is great, but I get tired of seeing portfolios that are just full of anime,” he said. “I want to see an artist’s work that is original and something that I haven’t seen before. So when all that you show me is anime, I think that you’re not original. So please, when you go on an interview, don’t just show them your anime drawings, unless you are interviewing for a job with an animation studio in Japan.”

Tindle, who is working on a new animated feature for Sony Animation, said he also likes to see fresh new work from artists. “Please don’t copy other people’s styles. I want to see that people can draw. You want to show your characters in different positions and expressions. Show them move. I get tired of checking out people’s Instagrams and they have ten different versions of Mary Blair drawings. Of course, draftsmanship is great, but if you want to do your own thing, really try and focus and hone your own style.”

Kaplan talked about how there are lots of more opportunities in the business for female animators, and praised the work of organizations such as Women in Animation for opening new doors. She also commended show creators such as Rebecca Sugar (Steven Universe) and Daron Nefcy (Star Vs. the Forces of Evil) for a more equitable climate in the toon business. “I think the most important lesson I learned throughout the years is that you have to respect your teammates,” she said. “Animation is all about teamwork…nothing gets done unless everyone is happy. Everybody wants to be respected, so always say thank you and let them know how important they are to the team. You’ve got to care about your classmates, and the people who work with you and around you everyday.”

Tindle added, “Put a really good team together. I work with people who are better than me and intimidate me,” he said. “I show my work to friends of mine whose opinions I respect. I talk to my friend director Jorge Gutierrez (The Book of Life) almost every day. Stay true to your vision, but if people agree about things you should improve about your work, you should listen to them!”

“If you are an artist, you are also a storyteller,” added Hartman. “You need to practice writing. If you can write and draw, the value you can put on yourself skyrockets. I am always looking for people who can draw and write. It also takes a great team to make a show a success. Fairly OddParents has been out there for 16 years. Any show that lasts so long has to have funny characters. Hit shows are like comets. You hope that they come around, but sometimes they may not come around for a long time, so you have to be ready to take advantage of the opportunities.” 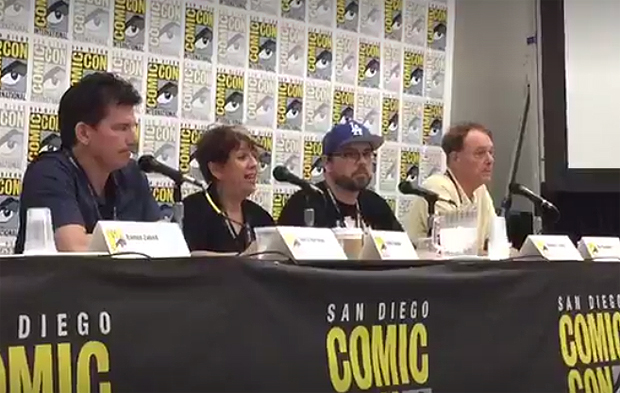