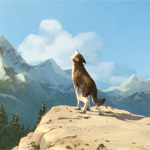 TIFF Kids International Film Festival is taking over the TIFF Bell Lightbox in Toronto later this week, starting its 21st edition off on an animated foot with the Canadian premiere of Sundance stand-out White Fang as its Opening Night feature. Running March 9-18, the program selections for kids ages 3-13 aims to delight, inform and influence with animated highlights including Nora Twomey’s Oscar-nominated The Breadwinner (which premiere at TIFF ‘17), Maya the Bee – The Honey Games and Magic Light Pictures’ latest charming book adaptation The Highway Rat.

“We’re surrounded by moving images these days,” said Cameron Bailey, Artistic Director, TIFF. “The more our kids learn how those images work and where they come from, the more they can navigate their world with confidence. That’s why we’re thrilled to bring the TIFF Kids International Film Festival and digiPlaySpace back to Toronto. There’s a way to make deep, interactive learning fun, and it happens at TIFF.”

The returning digiPlaySpace brings Mixed Reality to the Lightbox, allowing kids to jump into classic works of art, control a flamingo through dance, watch a machine draw a picture based on feeling and more in hands-on experience exhibition that explores the creative potential of machine learning, motion capture and coding.

This year’s TIFF Kids also introduces the “Little Film Lovers: Share a Lifetime of Film Memories” campaign designed to provide film access to youth across the greater Toronto area, regardless of financial circumstances. Throughout the festival, patrons will be encouraged to share their favorite childhood film memory and share the magic of cinema with the next generation with a donation.

Recommended for ages 10 and up:
The Breadwinner dir. Nora Twomey (Canada/Ireland/Luxembourg), English

SHORTS PROGRAMS
Reel Rascals: Stories Delight | From hand-drawn adventures to computer-animated musical delights, these short films from all around the world were chosen for our youngest audiences to enjoy. Come dance along with elephants in the jungle, hop aboard a pirate ship, and weather a blizzard with the beloved Ernest and Celestine. Recommended ages 3 and up.

Loot Bag Junior: Rebel Tales | Whether it’s venturing to the moon or out to sea, searching for the ones they love, or collecting stars or sweet treats, the characters in this collection of animated films follow their hearts and their dreams, and learn a few things about kindness and family along the way. Recommended for ages 6 and up.

Loot Bag Junior: Far and Wide | Travel from the enchanted forest, to the big city, to the clouds, and beyond the stars, in this selection of adventurous international animated tales that are certain to delight. Recommended for ages 8 and up.

Loot Bar Senior: Animated Worlds | Dive head first into the diverse world of animation. From 3D computer animation to stop-motion, this program is an animation-lovers delight. Beautifully blending technique and storytelling, this collection of short films feature stories of myth, folklore and majesty. Recommended for ages 11 and up.

Adventures from Around the World | Explore the lives of children around the world! Imagination and play unite the young protagonists in these short films from across the globe, and provide audiences with lessons in friendship, acceptance, and hope. Recommended for ages 6 and up.

It’s All Relative | For better or worse, our family members are instrumental in shaping who we are. Whether they are desperate to hold onto memories of lost loved ones or trying to forge understanding between younger and older generations, the protagonists in these short films must create a link between the families they came from and the individuals they would like to become. Recommended for ages 11 and up.

And the Oscar Goes to…
‘Wakfu’ S3 Gets Worldwide Netflix Release