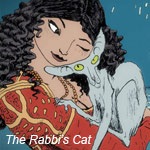 Three artistic and beautifully drawn 2D animated features will be competing for the Best Animated European Film Awards this December. The nominees are Antoine Delesvaux and Joann Sfar’s adaptation of Sfar’s graphic novel The Rabbi’s Cat, Alain Gagnol and Jean-Loup Felicioli’s A Cat in Paris and the bolero-infused Chico and Rita, which just played at the Ottawa Intl. Festival last week).

The Rabbi’s Cat tells the strange tale of a cat in 1920s Algeria, who swallows a parrot, learns to speak and converts to Judaism, while Millimages’ A Cat in Paris, follows the adventures of a modern-day Parisian feline who leads a double life. The music-filled Chico & Rita has been a festival favorite this past year. Directed by Tono Errando, Javier Mariscal and Fernando Trueba, the 2D feature centers on a love story between a beautiful singer and a piano player set in 1940s-era Havana, Paris, Hollywood and New York.

New York-based GKids, which distributed the Oscar-nominated The Secret of Kells two years ago, will also distribute Chico and Rita and A Cat in Paris in early 2012. Both films will get a limited Oscar-qualifying run later this year.

Here are the trailers for all three films: