Set for Oct. 28-31 at the California Yacht Club in beautiful Marina del Rey, Calif., the World Animation Feature Films & VFX Summit will bring together the world’s top talent and dealmakers, giving attendees an invaluable and immediate connection to each other regarding entertainment’s fastest-growing and most exciting industries.

VFX studios and feature producers will explore the future of potential collaborations to move projects through the pipeline toward international distribution deals.

Among the world-class talent scheduled to share their wisdom at the event are:

Other panels offer cutting-edge insights on vital specific topics from getting an agent, co-production legalities, software innovations, working and surviving in today’s competitive visual effects industry, the ins and outs of international co-productions, writing for the global audience, and much more.

The waterfront California Yacht Club in scenic Marina del Rey, is located just minutes from Los Angeles International Airport. For our international visitors, and closing out the three-day Summit, there will be a guided tour of nearby animation and visual effects facilities.

For complete details on the Summit, including ticket, travel and hotel accommodations, visit the website at www.animationmagazine.net/summit.

Visit animationsummitinvite.eventbrite.com to register for our Cocktail Party on Sunday, October 28, 2012. 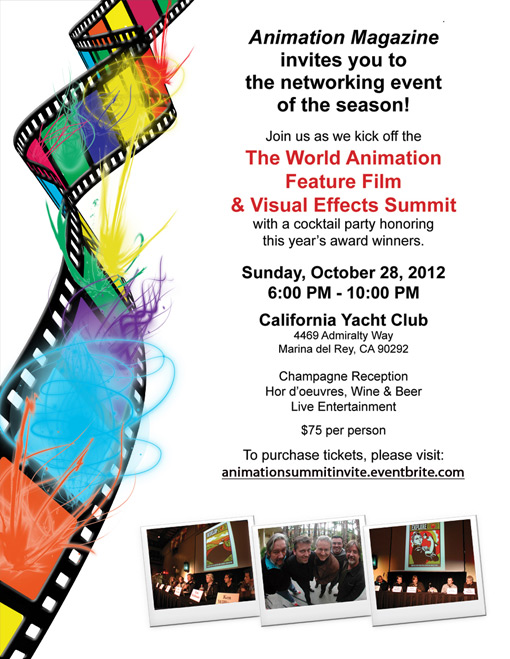