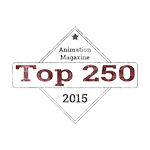 The Animation Magazine 250th issue celebration continues, this time with our list of creative to watch.

The Animag 250: Creatives to Watch

To read the full list and all the details of each list, check out the print or digital editions of Animation Magazine #250. To subscribe, check out our deals here.

And congrats to the all the creatives! We can’t wait to see what you all do next!