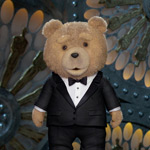 Ted, Seth MacFarlane’s foul-mouthed Teddy Bear, managed to offend the Jewish Anti-Defamation Group during the Oscar ceremony on Sunday night, as he rambled on about how Jewish people controlled Hollywood.

“While we have come to expect inappropriate ‘Jews control Hollywood’ jokes from Seth MacFarlane, what he did at the Oscars was offensive and not remotely funny. It only reinforces stereotypes which legitimize anti-Semitism,” the ADL wrote in its statement. “It is sad and disheartening that the Oscars awards show sought to use anti-Jewish stereotypes for laughs.”

Meanwhile, the hard-working team at Tippett Studio shared a few tidbits about how they prepped the character to present the Sound Mixing and Editing categories with co-star Mark Wahlberg.

For the filming of the segment, a duplicate of the Oscar stage was constructed at CBS Studios, with lighting and cameras situated to match the Dolby Theatre set up. The feat involved planning exact camera positions so that the animation, rendered using Dell Precision workstations, would integrate seamlessly during the awards telecast with Wahlberg and the show audience. With five nominees in each category, Tippett artists created 10 different outcomes in just a four-week production schedule. As the winners were unknown before the envelope was opened, Mischer and his team sat at the ready to push the button for the correct winner during the live broadcast.

“It’s always enjoyable working with Ted, and having him present at the Oscars was an exciting challenge,” said Clark. “As well, working with Seth and Don was great. Their trust and support made a technically ambitious presentation with a tight deadline run smoothly.” 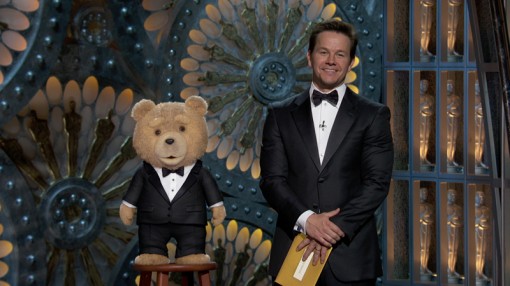 Ted Ruffles Feathers at the Oscars