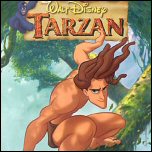 Disney’s 1999 animated hit, Tarzan, will join fellow Mouse House features Aladdin, The Lion King and Beauty and the Beast as it hits the Broadway stage with a musical version. Daily Variety reports that the live show has been slated to bow next spring. The venue and specific start dates are yet to be announced

Though no casting decisions have been made public, Shuler Hensley, who played Frankenstein’s Monster in Universal’s Van Helsing, is reportedly in final negotiations to play one of the apes. The Tony Award-winning actor will next appear on the Great White Way in The Great American Trailer Park Musical, which opens Sept. 15. He will also show up in the swashbuckling feature film sequel The Legend of Zorro.

The Tarzan musical is directed by Bob Crowley and will boast new songs by Phil Collins, who won an Oscar for the song “You’ll be in My Heart” and an Annie Award for “Two Worlds,” which were both featured in the animated movie. The show’s book was written by David Henry Hwang and choreography is being handled by Meryl Tankard.