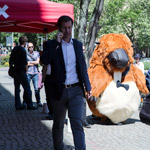 The 23rd FMX Conference on Animation, Effects, Games and Immersive Media wrapped up Friday having provided some 4,000 attendees to a varied, well-balanced program featuring 264 speakers — such as giants in the field like Phil Tippett, David Sproxton, Chris Wedge and William Joyce — discussing the challenges and triumphs of projects from Blade Runner 2049 and Black Panther to Early Man and Isle of Dogs.

Creating Worlds, the central theme of FMX 2018, looked beyond the production and technological aspects of media and entertainment and explored all facets of content creation as they inspire the creative process, from the initial creative spark to IP building and marketing. The program consisted of presentations, workshops, masterclasses, exhibitions and screenings spanning all aspects of animation, VFX, games and immersive media.

Prof. Andreas Hykade, FMX Conference Chair, enthused: “FMX 2018 was a complete success! Under the theme ‘Creating Worlds’ we were able to show through first-class conference contributions how igniting ideas can develop into inventions of great artistic and economic sustainability.”

Aardman Animations co-founder David Sproxton shared how Shaun the Sheep went from being a minor role in Wallace & Gromit to a global franchise in the space of 10 years, and presented Aardman’s latest film Early Man. “Creating worlds for Aardman means using our imagination find the places in which our stories are going to take place and our characters can inhabit and feel suited to,” he explained. “And of course we try to make them places in which comedy can play well.”

Visual effects legend Phil Tippett expressed a different position on world building: “Creating worlds means emotion. My emotion is misanthropic, because mankind is doomed. I want to tell the story of mankind as a comedy.” In his presentation he covered the stop-motion tricks of the first Star Wars films and the advent of CGI with Jurassic Park up to his new stop-motion film Mad God.

In the Wild & Strange track, curated by Jeanette Bonds, director and co-founder of GLAS Animation, indie animation filmmaker Réka Bucsi explained her path to animation and the creation of unconventional stories, and presented her feature film Solar Walk. For her, creating worlds as an artist means: “I guess everything. All of us are trying to do it. I am many times trying to escape into a world that is more interesting than the real one.”

Numerous talks presented current developments and productions from the field of immersive media. In the track AR Platforms, Apple, Google and Microsoft presented platforms with which they merge the virtual and the real world. In 2018, the Stuttgart Planetarium once again hosted a number of extraordinary lectures, including Sonaria and Coco VR. Conscious Existence was presented in a world premiere as a unique, interactive, multi-user VR cinema presentation.

In addition to the extensive program, FMX again offered networking and career opportunities with its Recruiting Hub, while numerous companies presented their latest products and services on the Marketplace and in Masterclasses, Company Suites and Workshops. The School Campus complemented this array of events as a meeting place for school reps, alumni and prospective students.

The 12th Animation Production Day also ended Friday evening, capped with the Trickstar Professional Awards Gala. Over the two-day co-production and financing event, 170 participants from 26 countries participated in more than 700 pre-planned meetings to discuss new animation projects. This year, the premiere animation business platform in Germany (presented as part of the Stuttgart International Festival of Animated Film and the FMX Conference) featured 48 highly promising projects highly promising projects with a total production value of around 170 million euros selected by the jury from a total of 71 applications.

The range of projects extended from TV series, films and games for children to comedy and science fiction for teenage and adult audiences. Alongside the German TV channels ZDF, KiKA, SWR, HR, Super RTL, Disney and Nickelodeon, numerous big European and international broadcasters were present including the BBC, Canal+, France Télévisions, Turner and DHX. Streaming services like Amazon Prime Video and the toy company Mattel were also popular meeting partners. Over 300 people attended this year’s APD Conference, which was held in the Rotunda of Stuttgart’s L-Bank on Thursday afternoon and was also open to FMX and ITFS industry guests.

“It was once again wonderful to see that, alongside the very concrete negotiations about financing, all the APD participants used this special opportunity to network with the players in the international animation scene and to inspire each other in exchanges about the current artistic and economic challenges and opportunities in all the many aspects of animation,” said Dieter Krauß, Managing Director, Organization and Finance, ITFS and co-organiser of APD

Presented for the second year, the Trickstar Business Award went to Studio Pupil’s Tünde Vollenbroek who, with her project House of Broken Hearts, had already been selected for the APD’s Young Talent program. The Tricks for Kids national series prize was awarded to Animanimals “Sloth” by Julia Ocker; the Tricks for Kids international series prize went to Hey Duggee “The Tadpole Badge” by Grant Orchard. Migros – “Finn” won the Animated Com Award International. The German Animation Screenplay Award went to Peterchens Mondfahrt by Ali Samadi Ahadi and Arne Nolting. This year also saw the inauguration of the Germany’s Next Animation Talent award: Jens Opatz and Pia Auteried are the happy winners with their project The Snollies. As part of the cooperation with CARTOON – European Association of Animation, once again this year three German producers will have the chance to pitch their series projects at the Cartoon Forum in Toulouse in September: Digedags – The Knight Runkel Series (Mar Vista Media), RuneMasters (bigchild) and The Orbiteers (Wolkenlenker).

APD 2019 is scheduled for May 2 & 3. www.animationproductionday.de 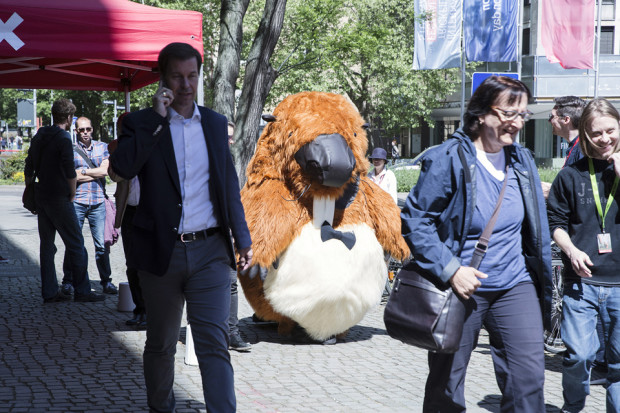 Bruno the Beaver, the 2018 mascot from Animationinstitut’s trailers, mingles with the FMX crowd. Courtesy of FMX 2018, photographers Dominique Brewing and Luzie Marquardt 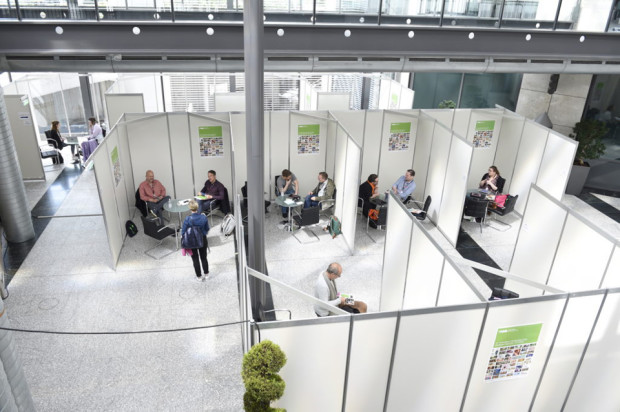