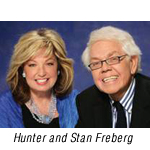 Classic animation voice actor Stan Freberg and his wife, Hunter, will appear Nov. 19 in conversation with comedian Penn Jillette at the WGA Theater in Beverly Hills.

This promises to be a real treat for fans of Freberg and his long comedy career that spans film, animation, recordings, advertising and television.

Great news: Hunter and Stan Freberg launch a new series of CDs, Songs in the Key of Freberg, Songs About Life. They entertain throughout the world as “Two Funny Frebergs.” Stan and Hunter take aim at little daily frustrations: we will still scream at the phone company, cringe at the thought of remodeling, grumble during traffic and listen shell-shocked to pharmaceutical side effects on television commercials. The vicissitudes of life that exist to annoy and frustrate us all seem a little less agonizing with Stan and Hunter’s spin.

Legendary comic icon Stan Freberg has been making people laugh for decades. He has released more albums than we can count, and has sold millions. His albums and his humor resonate with all generations. Remember the recent Mad Men episode when Peggy and her colleague chanted “John and Marsha”? That was Matt Weiner’s homage to Stan. It was Stan who came up with the term “Grammy,” and we can only imagine what his mantle must look like. Stan received a star on the Hollywood Walk of Fame on the same day as Marilyn Monroe, in 1960.

Beyond his albums, we have Stan to thank for funny commercials, and Advertising Age called him “the father of the funny commercial.” He has won a staggering 21 Clio Awards– the advertising equivalent of the Academy Awards. A voice over artist for Warner Brothers and Disney, Freberg gave life to animated characters for years. Hunter Freberg, Stan’s equally funny other half, left a hard-driving corporate life in international executive search (“Head Hunter”) to collaborate with Stan on the new album series. She translates her motivational speaking skills into great comedy with Stan, one of the great comedy writers of our time.

Penn Jillette, the other half of Penn&Teller, must really love political correctness, if only for the fodder it provides to Teller and himself. Penn&Teller: Bullshit! has been running on Showtime since 2003. In addition to Bullshit!, Penn&Teller are illusionists, magicians, comedians and commentators.

Penn Jillette and Teller have won Writers Guild Awards, Directors Guild Awards, and have been nominated for numerous Emmys. Their alchemy of words and visuals is thrilling– and we anticipate equally thrilling chemistry between Stan, Hunter and Penn.