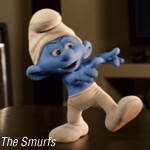 Global Smurfs Day celebrates the birthday of Peyo, the Belgian artist who created the Smurfs in 1958 in the pages of the comic Johan and Peewit. Peyo was born Pierre Culliford on June 25, 1928, and died Dec. 24, 1992.

Here’s some more background on the event.

On Global Smurfs Day, as participants enjoy fun Smurf-related activities in cities worldwide, they will be invited and encouraged to come to the events in Smurf costume in an attempt to set a new Guinness World Records title for Largest Gathering of People Dressed as Smurfs within a 24-hour period in Multiple Venues. The events will be synchronized around the world – this will be the most Smurfs that have ever been gathered at the same time. To achieve recognition from Guinness the global events must collectively add up to more than 2,510 Smurfs. Adjudicators from Guinness will be on hand in 12 cities around the world as it is expected that hundreds of participants in each city will come to the event dressed as Smurfs (white Smurf hat, white pants and shoes, and body painted blue). While all are being asked to arrive at the event in head-to-toe Smurf costume, each event will have Smurfs hats and blue T-shirts available.

Among the cities participating in the record attempt as part of Global Smurfs Day are:

Events include a Smurfs Experience in London as The O2 is turned into The “O-Blue” and a family event at New York’s “Smurf Street Blueport” (a.k.a. South Street Seaport); also, Peyo’s family will be on hand to join in the fun in their home country of Belgium.

In addition, there will be Global Smurf Day events in many other locations around the world, including in Los Angeles at Santa Monica Place, which will be the scene for Smurfy activities.