This weekend, Sony Pictures Media Arts Program will celebrate the 10-year anniversary of its program which provides arts and media education to underserved youth, along with partners California Institute of the Arts (CalArts) Community Arts Partnership (CAP) and the City of L.A.’s Dept. of Cultural Affairs (DCA). This special initiative has provided the only free animation program for kids in Los Angeles and brought artistic and technical training to young people in some of the city’s most underserved neighborhoods.

“As hosts of the 10th anniversary of the Sony Pictures Media Arts Program, we celebrate the talents of hundreds of young people, many of whom will grow up to be the artists and animators of the future,” said Bob Osher, President of Sony Pictures Digital Productions.

Through SPMAP, middle school students receive instruction in drawing, animation, and media arts at five community centers that are owned and operated by the City of Los Angeles. These centers are the Banning’s Landing Community Center in Wilmington, Center for the Arts Eagle Rock in Eagle Rock, San Fernando Gardens Community Service Center in Pacoima, William Reagh Los Angeles Photography Center near MacArthur Park, and the Watts Towers Arts Center in Watts.

“SPMAP is a model public-private partnership, and CAP is proud to work in collaboration with Sony Pictures Entertainment and the DCA to bring this after-school program to hundreds of students in five diverse neighborhoods throughout Los Angeles,” said Glenna Avila, Wallis Annenberg Director of the CAP program. “We are thrilled to be celebrating the 10th anniversary of this program, which is training hundreds of youth in animation and media arts, as well as training CalArts students as instructors and as contributing community citizens.”

For the celebration, SPMAP students, their families and special guests will attend a screening of the animated short films produced by the students in the program. They also will be treated to a party and arts and animation activities in the Sony Pictures Digital Production facilities.

Combining creative and technical training, the one-of-a-kind SPMAP program opens pathways to college and careers in media and the arts and creates a national model for arts education partnerships. Approximately 300 students a year go through this innovative after-school program, with many later attending CalArts and other institutions of higher learning. 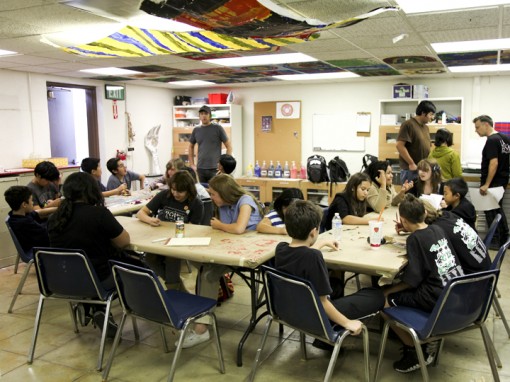