As part of the SIGGRAPH 2013 computer arts and technology confab (July 21-25 in Anaheim, CA) the exciting Dailies live show program will celebrate excellence in computer graphics, showcasing images and shorts in a rapid-fire, multi-artist series of two-minute presentations. This year’s Dailies is chaired by Mark Elendt of Side Effects Software and will feature 45 projects. Seating for the live show will be limited and assigned on a first-come, first-serve basis.

The Octopus and the Geisha presented by Edward Dawson-Taylor, EDJFX

What began as a technical and creative personal project, to create an eerie underwater short film with tentacles, took me to creating one of my proudest works and ended up being used as a music video and visuals for a band I have loved for over 15 years!

For this cinematic intro, the Blizzard Film Department explored a heightened level of stylization that influenced everything from character design and animation to environments, effects, and lighting.

Rigs that give animators the ability to use simulation at the beginning of the animation process and continue working on the result as if it had been animated by hand.

In this short film, a daring boy sleds down a towering mountain. After crashing, he discovers that reality was not quite what it seemed. His adventure is a metaphor for larger-than-life experiences. These moments, often created in our childhood, depend on our perspective.

Visit www.siggraph.org for a full list of Dailies participants. 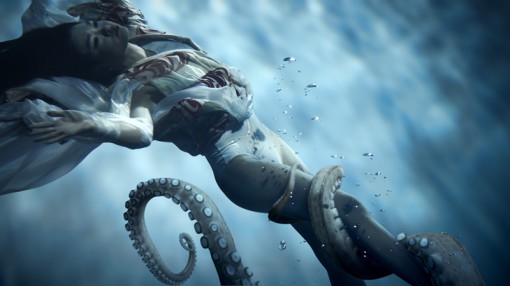 The Octopus and the Geisha