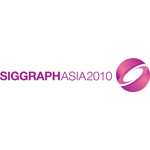 The Best of Show award goes to Poppy, a short film about two soldiers who find a baby on the battlefield. The film is directed by James Cunningham of New Zealand’s Supercollider house, working in conjunction with Leslie Chan.

The Best Technical Piece award was given to Civilization V., from Digic Pictures. Produced by Istvan Zorkoczy, this clip is a world-class rendering of a detailed and realistic living world.

A new award for the Best Student goes to Loom, by Ilija Brunck, Jan Bitzer and Csaba Letay of Filmakademie Baden-Wuerttemberg, Germany. This piece tells the story of a moth getting caught in a spider’s web.

The Computer Animation Festival program, a traditional favorite at SIGGRAPH Asia, seeks to uncover the possibilities in animation development. With a showcase of 108 pieces in the Animation Theater and Electronic Theatre screenings, the Computer Animation Festival will include the latest works from renowned production houses, such as Industrial Light and Magic and Pixar Animation Studios as well as new pieces from highly acclaimed institutions such as Chung-Ang University, Korea, and Filmakademie Baden-Wuerttemberg, Germany.

You may also like...
Related Topics:Awards, SIGGRAPH Asia, Three