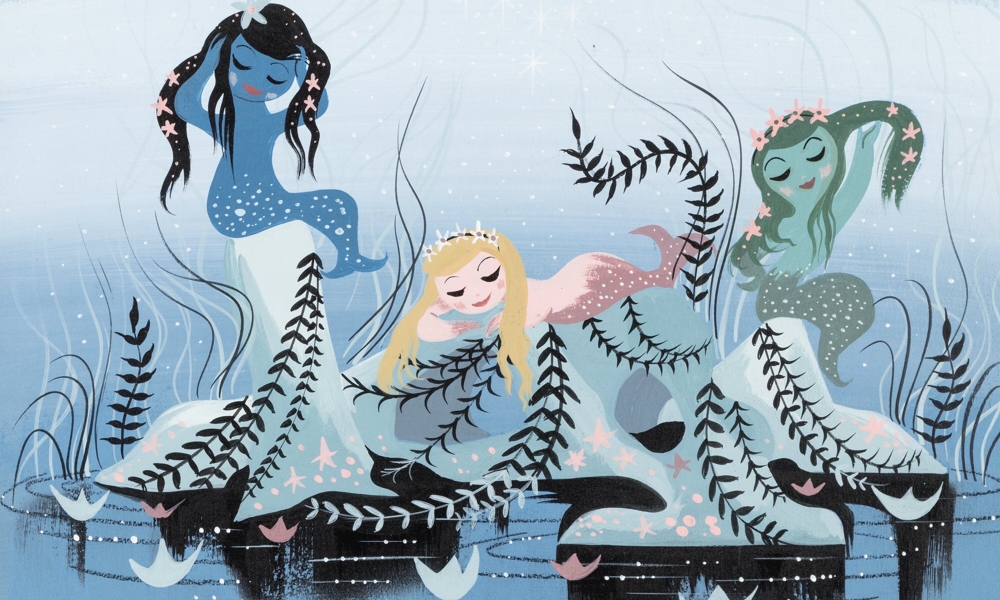 Charles Schulz, Winsor McCay, Mary Blair and Ub Iwerks quite famously drew comic-strip and cartoon characters, amusements aimed at children of all ages. But in 2020 their achievements are as revered and treasured as fine art, as evidenced by the fact their original works brought chartbusting sums in Heritage Auctions’ record-setting Animation Art event held Dec. 11-13.

The auction realized more than $4.27 million – significantly more than any previous auction of animation art. The sale included renderings and storyboards, production cels and master backgrounds from myriad beloved titles shown on screens big and small. More than 4,700 bidders worldwide took part in the landmark sale that saw an almost unheard-of sell-through rate of more than 99% and resulted in the highest price ever paid for an original Peanuts work created by Schulz.

“Not so long ago, animation art sales were routinely in the million-dollar range,” says Heritage Auctions’ Director of Animation Art Jim Lentz. “In June we set a new record at $3.7 million, only to break that a mere six months later. This is a serious number for any art auction, but for animation art, it’s absolutely historic.” 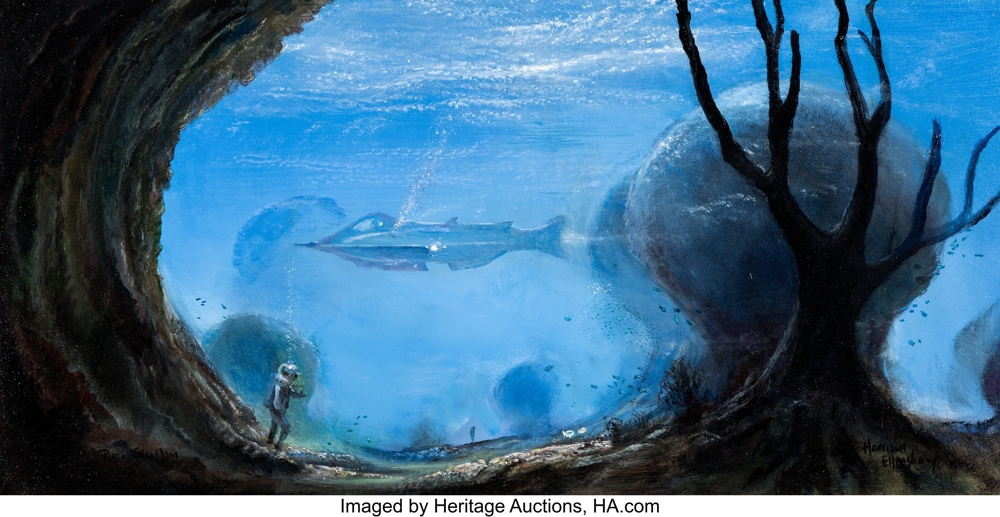 20,000 Leagues Under the Sea painting by Peter Ellenshaw

The auction featured the largest-ever sale of artwork made for the Fleischer Brothers’ groundbreaking Superman cartoons of the early 1940s, a day full of Disney and the first epic sale of Warner Bros. Animation archives since the company stores closed almost 20 years ago. There was something for everyone, from rough drafts of history sketched and painted by storyboard artists Peter and Harrison Ellenshaw, whose auction debut was topped by a 20,000 Leagues Under the Sea painting that realized $26,400, to cels from the Super Friends to Heavy Metal moments.

The Animation Art auction got off to a momentous start on the first day, when the drawings Schultz made for “The Peanuts Album” sold for $288,000. That bested a previous high-water mark for original Schulz art set only last month, when a Nov. 17, 1950 Peanuts daily strip realized $192,000 during Heritage’s Comics & Comic Art event. These charming portraits of eight beloved characters, among them Charlie Brown and Snoopy and Lucy, were made for a newspaper giveaway in 1953; until this sale, these early iterations of the classic characters had never been seen in public or available at auction. 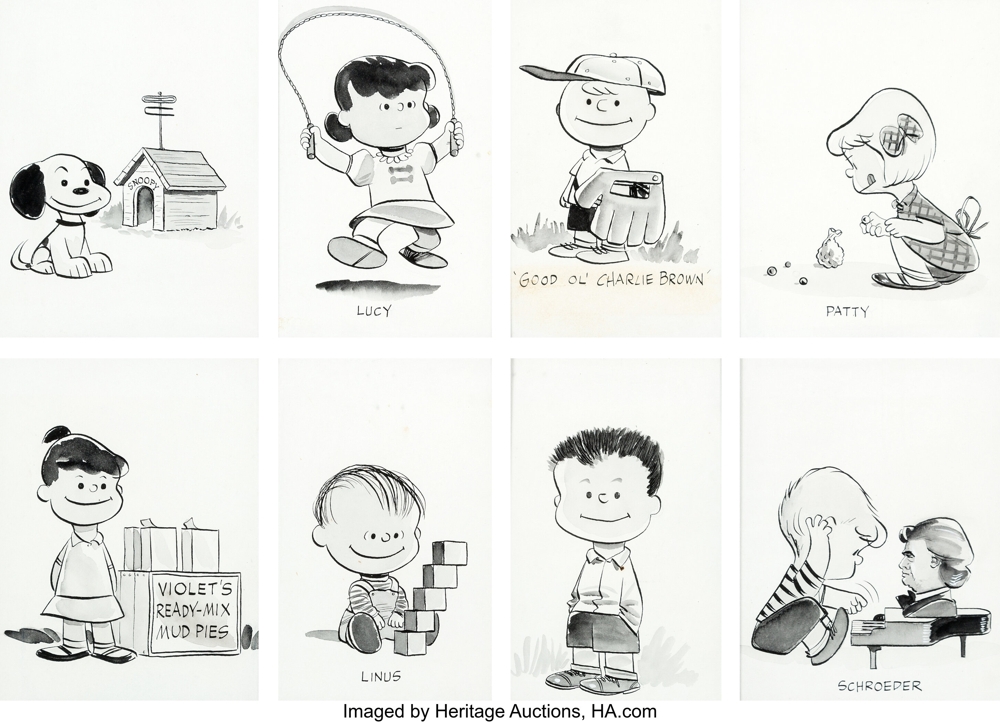 Another extraordinary rarity set a record during the sale’s second session, when Iwerks’ drawings of Minnie and Mickey Mouse realized $43,200 – the highest price ever paid at auction for original Disney drawings. The amount should not surprise, as these pieces were made for 1928’s landmark Steamboat Willie, which marked the official debuts of both beloved characters and was among the first fully synchronized sound cartoons. And, like the Schulz piece, these drawings had never before been to auction. 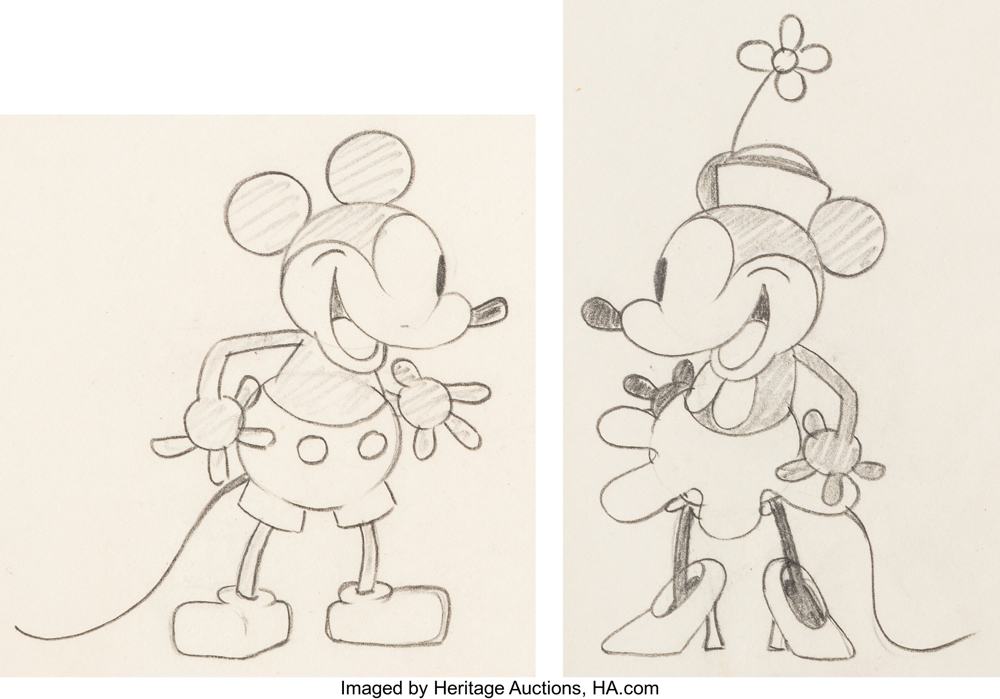 A drawing from another pioneering cartoon, 1914’s Gertie the Dinosaur, realized $33,600 – the most anyone has ever paid to own a piece of the cartoon named one of the greatest-ever in a 1994 survey of animators. Winsor McCay has long been an esteemed figure among animation historians; now, it would seem, the rest of the world is catching up to the significance of the man also responsible for the revered comic strip Little Nemo.

This Animation Art event was populated throughout by illustrators, animators and fine artists and authors who elevated cartoons to new artistic heights, from Disney’s legendary story artists to director Tim Burton to The Simpsons’ creator Matt Groening. 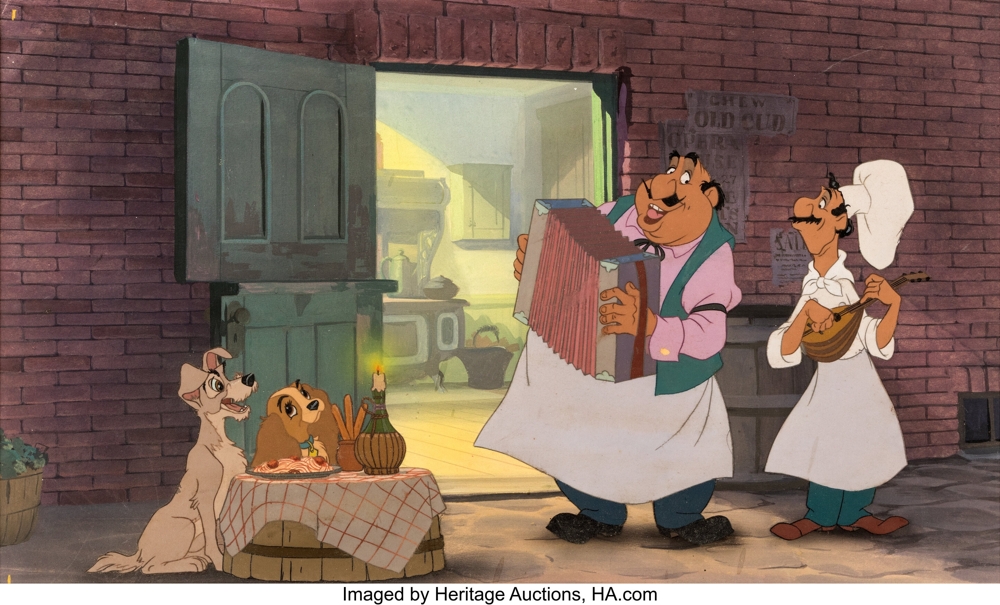 A production cel for one of the most famous and certainly beloved sequences in Disney history – the “Bella Notte” scene from 1955’s Lady and the Tramp – was among the event’s biggest hits, realizing $37,200. This cel, from The Joe Rinaldi Collection, is a moment familiar to anyone who’s ever watched a cartoon; it’s one of the most imitated and adored moments ever committed to celluloid, as Tony and his cook serenade the dogs while they share their spaghetti dinner behind the Italian restaurant.

Mary Blair, one of Disney’s “queens of animation” and Walt’s favorite artist, was represented in this auction by some four dozen pieces ranging from her earliest work on Dumbo to her late-career renaissance as Disney’s handpicked design for his “It’s a Small World” attraction. It should not surprise that of the top 20 lots in the auction, 12 were touched by Blair.

Her most popular piece in the Animation Art event featured no iconic characters, however. It was, instead, a conceptual rendering of the mermaids made for Peter Pan, which realized $48,000. Not far behind was her 1940s painting of dancing flowers for a film never made, Fiesta of the Flowers, which sold for $40,800. 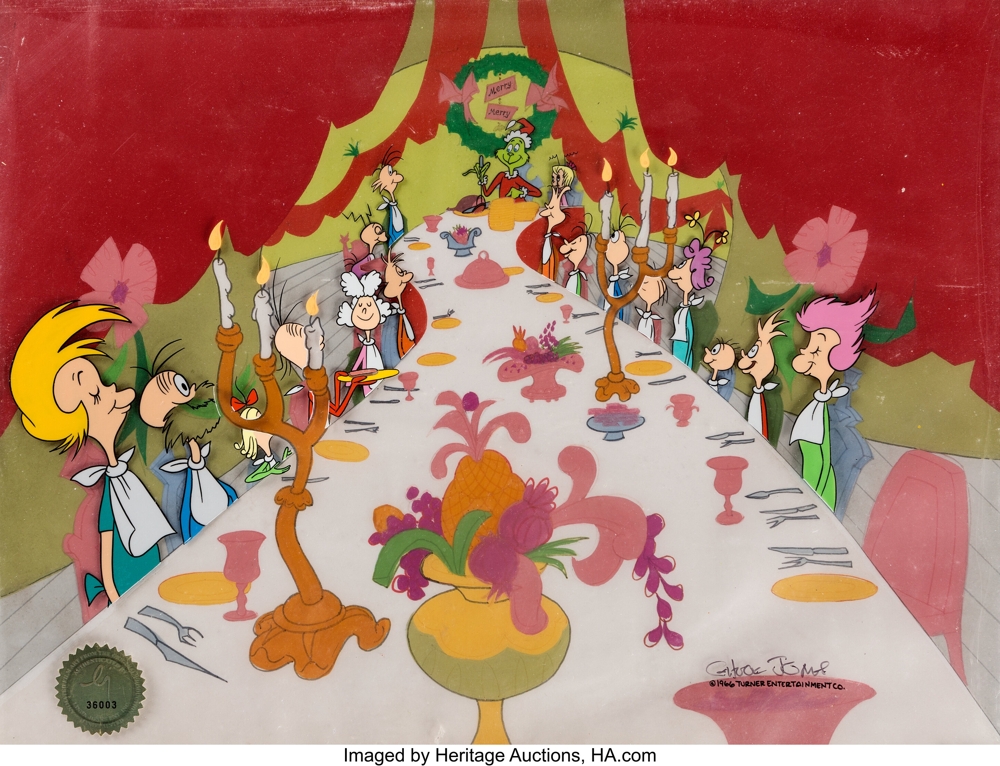 This being the Christmas season, of course, no animation event would have been complete without offerings from CBS’s 1966 adaptation of Dr. Seuss’ How the Grinch Stole Christmas!, which seems to be on the remake treadmill of late. A production cel setup and key master background from the Christmas feast sequence – signed by its director, the legendary Chuck Jones – made one winner’s heart grow three sizes the day it sold for $20,400.

Says Lentz of the final results, “It is so satisfying in these difficult times to see Animation Art – the artwork of smiles – grow to record heights in 2020. It was just the right time.”

See all the results from the Dec. 11-13 Animation Art auction here.