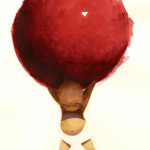 It’s been a year since an earthquake and resulting tsunami caused tremendous damage to Japan, and the animation community and Pixar are here to remind fans that there’s still plenty of work to be done on the recovery by offering an anniversary benefit auction.

The auction, hosted on eBay under the auspices of Artists Help Japan, includes such items as a 90-minute tour of Pixar hosted by Toy Story 3 art director Daisuke “Dice” Tsutumi, selections of original sketches from Pixar artists and a rare Tiki mug that was a gift given to the crew of Toy Story 3 by director Lee Unkrich.

Tsutumi founded Artists Help Japan to help with the response to the disaster and the event has raised more than $240,000 todate.

Other items for sale include  a watercolor  by Enrico Casarosa from the children’s book based on his Oscar-nominated short La Luna; and a copy of the book To Infinity and Beyond! The Story of Pixar signed by John Lasseter, with a sketch of Buzz Lightyear.

The auctions run through Thursday.