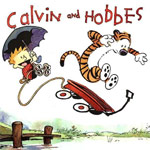 An incredibly rare piece of original artwork from the comic classic Calvin and Hobbes will be offered at Heritage Auctions’ Vintage Comics & Comic Art Signature event taking place February 23 at the Fletcher-Sinclair Mansion (Ukrainian Institute of America) in New York. The piece, a 1989-90 calendar cover illustration done in watercolors (c. 1988) by Bill Watterson, is expected to net over $50,000 when it goes up on the block.

“Beyond the Peanuts comic strips of legendary cartoonist Charles Schulz, there is no more popular comic strip and certainly no strip where the original art is more in demand,” said Todd Hignite, Vice President of Heritage Auctions. “The difference being that original Schulz work can be had at a variety of price points. Original Calvin and Hobbes artwork has, simply, never come up for public auction. There’s really no telling how high collectors will be willing to go on this one.”

Comic creator and artist Watterson is notoriously reclusive. Despite the popularity of his funny and philosophical Calvin and Hobbes, which ran from 1985-95, Watterson ceased producing the strip. In addition to shunning merchandising opportunities, the artist never sold his original artwork and rarely gifted or traded it. Only a few original pieces have ever come onto the market, none of which had been published like the piece set for auction. 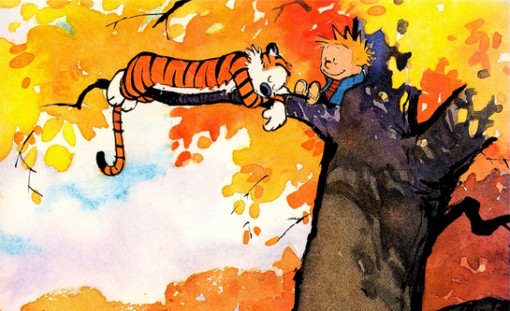 The calendar illustration comes from the collection of one of the American comic strips’ most important historians, Rick Marschall (a.k.a. “the komic connoisseur”), to whom it is inscribed in the lower right corner from Watterson himself. Visit www.HA.com for more information or to bid on this important artwork.