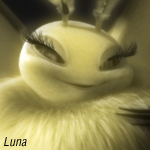 Rainmaker Entertainment’s just-completed animated short film Luna has been chosen to screen at the Electronic Theater at the upcoming SIGGRAPH Computer Animation Festival set for Aug. 7-11 in Vancouver.

One of only 77 films selected to run in the Electronic Theater, Luna is set to screen in programs scheduled for Aug. 8-10 from 6 to 8 p.m. and Aug. 11 from 10 a.m. to noon in the West Building, Exhibit Hall A, at the Vancouver Convention Center. 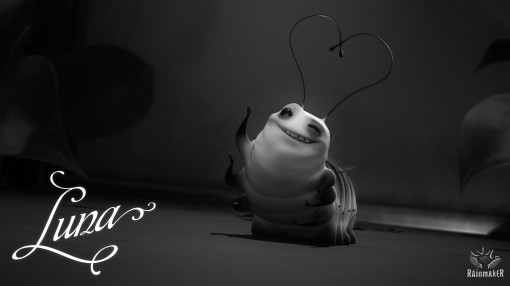 Luna is a creative labor of love for Catherine Winder, president and executive producer at Rainmaker Entertainment, and her talented artists and production team. It was the first project she greenlit when joining the company two years ago, seeing it as an opportunity to showcase the innovative and artistic talents of the Rainmaker Entertainment team, which also conceived the storyline.

Luna depicts the flirtatious dance between a charming and debonair caterpillar (Silky) and a beautiful and graceful month (Luna). But Luna is perplexed. Is their story one of unrequited love at first sight or will true feelings be revealed in a glaring flood of light? 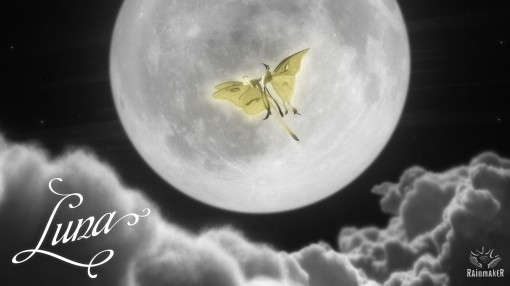 “Like all of our original in-house projects, Luna was carefully handcrafted to realize a unique aesthetic style that best suited our story and characters,” said Winder. “ We decided to tell Luna’s story using a film noir black and white style, with touches of a yellow glow at key story points to symbolize love, attraction and passion. This special effect and technique added depth to the characters and enriched the storyline.”

She continued, “Being outside the traditional Hollywood studio environment, I encourage our Rainmaker team to take creative risks and be innovative in their approach to visual storytelling. I think that is what sets us apart from other animation studios and also what attracts filmmakers to us. We are experienced at helping filmmakers realize their creative vision and I think LUNA is a perfect example of our abilities and talents.”

Luna has enjoyed a limited screening engagement at the AMC Century City 15 in Los Angeles and was originally produced in 2D. Rainmaker is putting the finishing touches on a 3D stereo version of Luna and will host a special screening at its headquarters in Vancouver on the evening of Aug. 10. 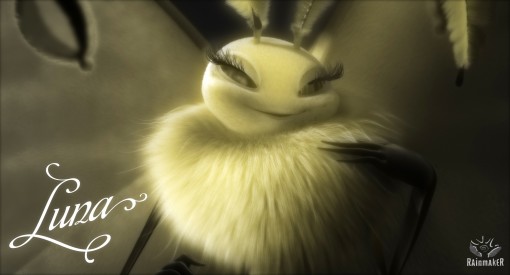 Inspired by an original concept by in-house producer, Luke Carroll, Luna was produced and written by Catherine Winder and directed by Donna Brockopp. Kimberly Dennison was the supervising producer with Kylie Ellis acting as line producer. Francesca Natale was the production designer and the music was composed by John McCarthy. Sound design and rerecording mixing was done by Craig Berkey.

“I am pleased to be part of the Luna production team and was proud to work with the Rainmaker artists to bring to life this enchanting tale in such an unique and visually impressive way by utilizing the latest in CGI technology,” said Brockopp, whose animation credits include Disney’s The Jungle Book 2 and Peter Pan’s The Return to Never Land. “Luna and Silky will delight, charm and mesmerize audiences in this endearing story.