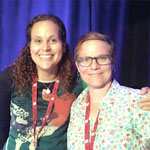 One of the highlights of this year’s TAC conference in Ottawa was an inspiring panel featuring two highly regarded TV animation creators: Chris Nee (Doc McStuffins, Vampirina) and Jennifer Oxley (Peg + Cat, 3rd & Bird). The two trailblazing, dynamic women shared many important stories about the importance of promoting diversity both behind the scenes and in their animated shows.

Nee, whose Disney show Doc McStuffins has received raves for providing an important role model for young black girls, talked about how children are affected when they don’t see characters who look like them in animated content. “It makes you feel like you don’t matter if you don’t see yourself on TV,” she said. “Also, it’s the classic thing that you can’t be it if you don’t see it. We have to provide images to kids that will allow them to dream that they can be anything. What Doc has shown to me is what we really can do when we make the right choices. Six months after Doc went on the air, a black female doctor told me that she was watching the show with her four-year-old son, and he turned to her and asked, ‘Mom, can boys be doctors too?’ It just shows you how much you can change in six months.”

Nee went on to talk about how she made the show for her son, who is a white boy, and it never occurred to her that it would matter to him that Doc was an African American girl. “I knew that the representation needed to be out there, and see the business of the business, seeing those voids works very well for us,” she noted. “It’s not just about doing good.”

The Importance of Being Inclusive

Jennifer Oxley, whose father is white and mother is black and Native American Cherokee, talked about being inspired by watching Charlie Brown specials on TV, and how she was encouraged by her mom to pursue animation at an early age. “In terms of hiring a diverse staff for the shows, it can be hard because there are few female directors, let alone female directors of color, in the animation world. At our studio, we work really hard to make sure that our staff is diverse. We feel very good about having 50 percent of our staff being female. Because when you have a diverse team, you have different ideas and ways to looking at things.”

Nee said it’s important to make sure you have diversity in your staff, even if it means if someone on your staff isn’t carrying their weight, you’re the one who has to do that work. It makes it easy for you to go back to the same pool of people. It may be more work to find the staff that is going to change the makeup of your team, beyond your immediate rolodex. “On Doc, I’m working with a woman who is not verbal. She has MS and works through a translator. We made a decision to work with her, although it was much harder for us.”

Oxley also discussed the acclaimed “The Eid al-Adha Adventure” episode of Peg + Cat, which required lots of research about the Muslim holiday, and also featured two non-actor Muslim American kids as voice actors. She discussed how important it was for the team to use authentic voices and genuine depictions of the Muslim American experience, which has made a real impact on young viewers of the show and their families.

Nee and Oxley both talked about today’s tough political and social landscape, where sexual and identity politics have made it more difficult to be inclusive and provide real representations of what all families look like. Nee, who is white, recalled the time she received an NAACP Award and accepting the award, she told the audience, “I am not who you expected to be standing here,” which got a big laugh and addressed the elephant in the room.

She also added that she feels the black community gave her a pass because, as a lesbian woman, she hadn’t walked through life being accepted everywhere. “I know what it is to be different and not see myself on the screen, though recently I had someone sitting in front of me, ‘Sooooo, you’re white, right?’ And I get it, and I do hope the next Doc comes from a black creator,” she explained.

Oxley and Nee then went on to talk about the defining diversity beyond ethnicity, in terms of having female characters, people with same-sex partners, people with different disabilities. They also mentioned putting the extra effort to have diversity in non-human characters, such as animals, toys and robots, and making sure there are diverse faces in crowd scenes as well.

Oxley brought up the fact that the Eid episode of Peg + Cat generated lots of conversation because they featured a young Muslim American girl wearing a hijab. “We also got lots of positive responses from the Muslim community,” she recalled. “In the beginning, we were worried about getting some negative responses, but it was the polar opposite. It makes a huge difference when we hear stories about how the show was the first time a young Muslim girl saw people who look like her on her favorite TV Show.”

Nee told a few stories about the controversial episode of Doc McStuffins that featured a same-sex married couple. “It was not easy” in today’s political climate, she said, adding: “It was actually a show about emergency preparedness,  it just happened to have a character with two moms. It was the first time we outwardly said that two characters were in a same-sex relationship.”

At the end of the panel, Oxley and Nee shared a useful diversity checklist with the audience: 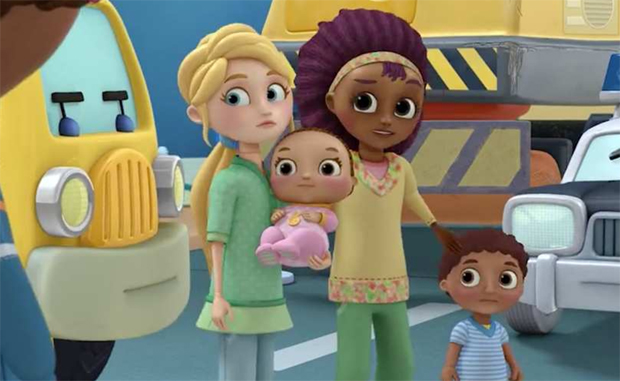 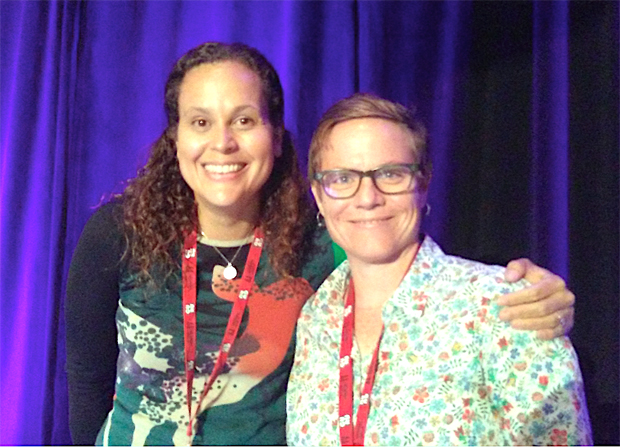 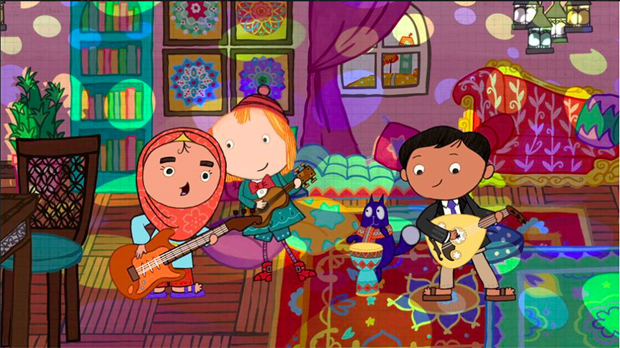