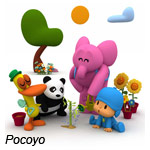 As the official Global Kids’ Ambassador for World Wildlife Fund’s Earth Hour initiative for a second year, Zinkia Entertainment’s popular animated character Pocoyo will support the new Earth Hour 2012 “I Will if You Will” campaign by spreading Earth Hour’s message to children around the world and by participating in his own challenge.

For Pocoyo’s challenge, Zinkia has pledged to plant up to 10,000 trees—one tree for every person who goes online to play). Pocoyo’s Recycling Game, which launches today through Earth Hour’s website (www.earthhour.org) and the Official Pocoyo Facebook page (http://www.facebook.com/pocoyo). A pre-launch test campaign generated nearly 10,000 plays in less than one week.  As a result, Zinkia co-Founder and chairman José María Castillejo has personally pledged to plant up to 10,000 trees when 10,000 more people visit the sites to play the game, as part of the official Earth Hour campaign launch. The trees will be planted by the charity partner, Trees for the Future, whose mission for 2012 is to plant 17 million trees worldwide.

Earth Hour 2012, the global initiative in partnership with World Wildlife Fund, today launched the “I Will If You Will” campaign, designed to showcase how everyone has the power to change the world they live in. Earth Hour 2012 takes place Saturday March 31 from 8.30p.m. to 9:30p.m. local time as individuals, businesses, governments and communities are invited to turn out their lights for one hour to show their support for environmentally sustainable action. 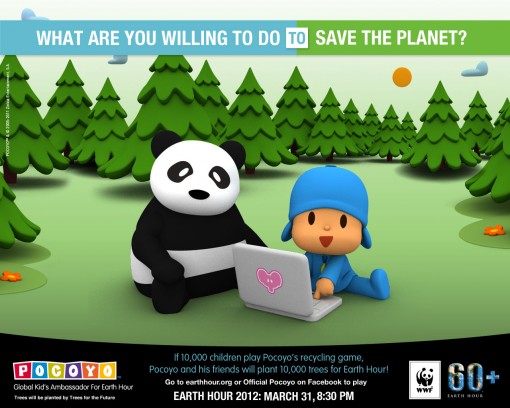 The “I Will If You Will” digital platform (http://youtube.com/earthhour) was created by global ad agency Leo Burnett, and is a collaboration with YouTube, bringing together the world’s biggest social video platform with the ‘world’s largest action for the environment.’ The “I Will If You Will” campaign uses the YouTube video platform to empower people to share a personal dare with the world by asking, “What are you willing to do to save the planet?”

Daily episodes of Pocoyo air in over 150 countries around the world and online, with more than 700,000 Facebook fans and 750 million hits on You Tube. As the Global Kids’ Ambassador for Earth Hour, Pocoyo continues to raise environmental awareness among today’s children, empowering kids, their parents and caregivers to “turn off the lights” during Earth Hour, and use easy, environmentally sustainable actions to encourage kids to play a vital role in preserving our planet year round.

Zinkia Ent.’s Pocoyo is an award-winning animated series about a young boy’s discovery of the world around him, representing a universe of core values that promotes a philosophy of curiosity, sincerity, interest, tolerance, respect and love. The show is narrated by writer/actor Stephen Fry (Sherlock Holmes: A Game of Shadows) who guides Pocoyo with gentle humor. The series airs daily at 1 p.m. on Nick Jr. For more info, visit www.zinkia.com