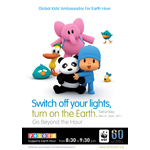 The campaign urges children to learn more about and protect the environment. It calls for kids, parents and caregivers to turn off the lights during Earth Hour, set for 8:30 p.m. local time on March 26. The campaign also promotes easy and environmentally sustainable actions “beyond the hour.”

The campaign will use animation content and online activities featuring characters from Pocoyo to get encourage children to get involved. Earth Hour activities can be found at www.pocoyo.com/earth_hour_2011.html. In 2010, the Earth Hour message reached 1.3 billion and the event saw hundreds of millions of people switch off in more than 4,616 cities and towns in 128 countries.

“Pocoyo is about a young boy’s discovery of the world around him, which makes it such a perfect fit with the objectives of Earth Hour and the World Wildlife Fund,” said  Jose María Castillejo, co-founder and chairman of Zinkia Entertainment . “We are tremendously honored to broaden our relationship with Earth Hour Global and the World Wildlife Fund by expanding Pocoyo’s role to that of Global Kids’ Ambassador for Earth Hour and look forward to working together on the creation of programs that deliver fun while creating lifelong habits of eco-friendliness that go ‘beyond the hour.’”