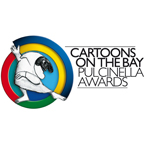 This year’s special programming tributes included a focus on the output of Brazilian animation studios (TVPinguim, 2d Lab, Digital Spirit and Mixer, to name a few), as well as a salute to French studio Method Animation. In addition, festival-goers were treated to Italian-language versions of Fox/Blue Sky’s Rio and Disney’s Winnie the Pooh before their official release in the country. Roberto Genovesi is the artistic director of the event, which is sponsored by Italy’s TV channel Rai.

Here is the complete list of the winners of Cartoons on the Bay’s Pulcinella prize: