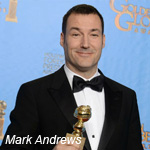 Pixar’s Brave won the Golden Globe on Sunday for Best Animated Feature Film. The blockbuster film, which has made over $535.4 million in theaters worldwide, was the most popular animated movie at the box office in 2012. The film is also doing very well on the DVD/Blu-ray chart since its release in November.

Also competing for the award in the animation category were Frankenweenie, Hotel Transylvania, Rise of the Guardians and Wreck-It Ralph. The Hollywood Foreign Press seems to have a soft spot for Pixar films since the award has gone to the studio’s titles six times since the category was introduced seven years ago.

Accepting the award, director Mark Andrews said, “Holy cow. What an amazing company to be in. 2012 was an amazing year for animation. I would like to thank Brenda Chapman for coming up with this amazing story; John Lasseter, Ed Catmull, Jim Morris, Andrew Stanton, Pete Docter—my bosses, colleagues, peers and friends who gave me all the support, my incredible producer Katherine Sarafian, Bob Iger and everyone at Disney for being brave to do this film with this amazing heroine at the center of the film. Of course, my family, my wife Patricia, and my four children….Being Brave is about being true to yourself and allowing your loved ones that same freedom.”

The new big animation awards show to keep an eye on will be the Annies, planned for February 2nd, for which Brave is nominated in 10 categories, along with Disney’s Wreck-It Ralph and DreamWorks’ Rise of the Guardians. The film will also be competing for a Best Animated Feature Oscar against Frankenweenie, The Pirates! Band of Misfits, ParaNorman and Wreck-It Ralph. 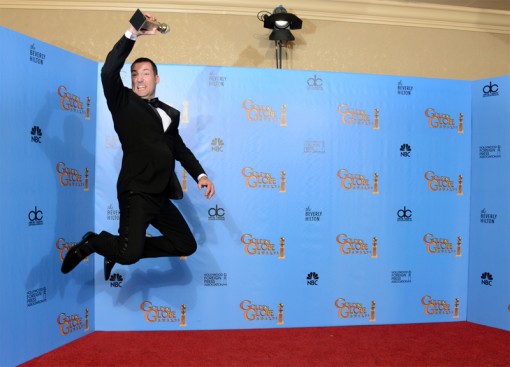 Mark Andrews leaps with his award at the 70th Annual Golden Globe Awards.