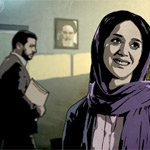 If you are in Palm Springs, Calif. this weekend, you’ll want to check out the inaugural Palm Springs International Animation Festival. Led by animator Brian Hehil Hoff and Gallery owner Dmitri Halkidis, the festival will screen over 150 animated films from 92 countries and will present awards in categories including Animated Feature, Animated Short, Animated Music Video and Student Animation. Panel discussions, seminars, and educational programming will be held in conjunction with local educational departments including the Arts Institute of Palm Springs High School. Parties and special events will provide the social focus for the festival.

Highlights of the festival include the opening night screening of Dorota Kobiela and Hugh Welchman’s Loving Vincent, the world’s first fully oil-painted feature from Breakthru Films, which comprises  more than 65,000 hand-painted frames, along with a special live-painting demonstration. Also on tap is Bilal: A New Breed of Hero, the first fully Middle Eastern-funded and produced CG-animated film inspired by the story of Bilal Ibn Rabah and Ali Soozandeh’s Tehran Taboo, a rotoscope-animated feature that premiered at the Cannes Critics’ Week and was in competition at Annecy. The screening will be followed by a Q&A session with the filmmakers, cast and crew.

To learn more about this weekend’s programs, visit www.psiaf.org