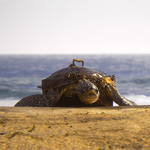 SIGGRAPH 2018 has announced the award winners from its Computer Animation Festival contenders, playing in the Electronic Theater lineup at the 45th conference (Aug. 12-16, Vancouver).

Taking the Oscar-qualifying Best in Show prize is French student film Hybrids, a graduate project created by Florian Brauch, Kim Tailhades, Matthieu Pujol, Yohan Thireau and Romain Thirion at Motion Picture in Arles (MoPA). The six-minute piece imagines an underwater world where the creatures of Earth’s oceans have found unique ways to adapt to the pollution around them. Hybrids has been warmly received at festivals around the world, notably winning Best VFX in a Student Project at the VES Awards, the Amazon Audience Award from Stuttgart, and a Jury Distinction at Annecy.

Hybrids – trailer from HYBRIDS on Vimeo.

The Computer Animation Festival Jury Choice Award will go to DreamWorks Animation’s Bilby, directed by Pierre Perifel, Liron Topaz and JP Sans. The vibrant, sweet and slapstick-funny Outback adventure centers on a self-sufficient little bilby who gets caught up trying to protect a puffball of a baby bird from the many threats of the Australian wilds. Part of the first wave out of DWA’s new Shorts Program, Bilby premiered at the Annecy festival and took the Audience Award for Animated Short at Palm Springs ShortFest a few weeks ago.

The 2018 Best Student Project is Overrun from Supinfocom Rubika, another French school, directed by Pierre Ropars, Antonin Derory, Diane Thirault, Jérémie Cottard, Matthieu Druaud and Adrien Zumbihl. The short follows the journey of a lone ant plunged into a dark and dangerous place, as it scrambles to escape from its fascinating trap. [Trailer]

Read about more highlights of the SIGGRAPH confab in the August/September issue of Animation Magazine. See the 2017 Computer Animation Festival winners list here. More info and registration at s2018.siggraph.org.