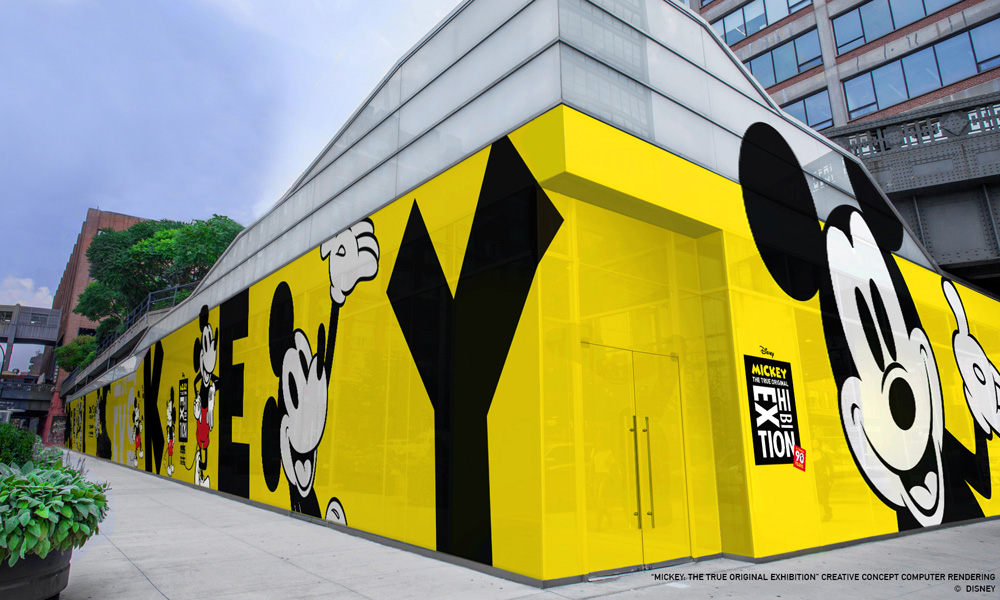 It all started with a mouse. And just as the Mouse popped out of thin air in New York back on November 18, 1928, a new pop-up exhibition celebrating Mickey will be held in lower Manhattan in November. The new exhibit, “Mickey: The True Original Exhibition” celebrates 90 years of Walt Disney’s famous mouse, from the animated cartoons to the iconic merchandise to his effect on popular culture. It’s enough to make you exclaim the first words that Mickey ever uttered: “Hot dog!”

The exhibit divides an enormous space of 16,000 square feet into separate rooms and tunnels, curated by Darren Romanelli, a leader in experiential art and a specialist in re-appropriating classic brands. Disney and Romanelli confirm that this exhibit is the biggest Disney experience to come to New York City in several decades (perhaps since Fantasia’s world premiere in 1940).

“There really will be something for everybody,” says Romanelli, who has spent two years working with the Walt Disney Archives to create an exhibit that will appeal to everyone from his two young daughters to the Mickey über-fan. “We’re creating this fully-immersive experience where you’ll walk through different chapters of Mickey’s history in different rooms, and where you can connect and capture yourself in these environments. You can also enjoy a piece from the archives, and spend time with contemporary artists who re-approached those moments from the archives, and created something site-specific in direct dialogue with those pieces.”

No less than a dozen artists from around the country are contributing to the exhibition. Daniel Arsham provides a “Hiding Mickey” wall sculpture. Katherine Bernhardt has composed an enormous mural. Brian Roettinger is decorating a wall with comic-inspired ink graphics, while London Kaye gives us floor-to-ceiling crochet inspired by Mickey’s first color cartoon, The Band Concert. The many rooms will be inspired from Mickey’s journey as recently as Mickey Mouse Clubhouse and as classic as Fantasia, which, by the way, is Romanelli’s favorite iteration of the character.

Since September, three of the contributing artists had created what Romanelli called “Teaser Moments” across the country, tapping into Mickey’s journey through different consumer products. Kenny Scharf, a contemporary of Warhol, Basquiat and Haring – all of whom had integrated Mickey in their art – built a Cosmic Cavern out of Mickey timepieces in San Francisco (home of the Walt Disney Family Museum). Amanda Ross-Ho created a larger-than-life Mickey T-shirt in Chicago (the city where Walt was born). Shinique Smith created a huge sculpture out of Mickey plush dolls in Los Angeles (the city where Mickey was first brought to life). Each piece was on display for two weeks before being trucked to New York, where they have been included in the installation.

Romanelli also contributes a piece: a giant Be@rbrick sculpture made from deconstructed vintage Mickey shirts that he has been collecting for 20 years.

Romanelli has been a fan of the Mouse all his life. A painting of Mickey hangs in his Los Angeles office. Since he co-founded his DRx art agency and the Dr. Romanelli brand in 2000, he has worked with artists to appropriate classic brands to make them approachable.

“We love diving into archives,” he says, “digging up old stories and contemporizing them.” It builds on Romanelli’s earlier background as a marketer, and his current penchant for fashion design. “My focus as a designer really lies in taking something old and making it new.” It was why, in 2003, he contributed to Disney’s push to celebrate Mickey’s 75th birthday: DRx covered walls in New York and Los Angeles with murals of Mickey Mouse comics strip art, and he projected old Mickey Mouse cartoons on the side of old buildings during L.A. rush hour traffic. Since then, he has worked alongside Disney with its Chicken Little and Tinker Bell properties.

But to Romanelli, Mickey is something special. “From a media perspective, any way we re-work Mickey – whether his color palette alone, or a snippet of his shoe or his glove – he’s just so recognizable! The power of the iconography alone is so timeless. And I think there’s a visual impact that he holds. There’s a comfort in seeing him and what he stands for. And for me that’s happiness, adventure, and everything positive.”

Mickey: The True Original is open from November 8 through February 10 at 60 10th Avenue in New York City.

Jake S. Friedman is an animation historian. Visit him at www.JakeSFriedman.com. 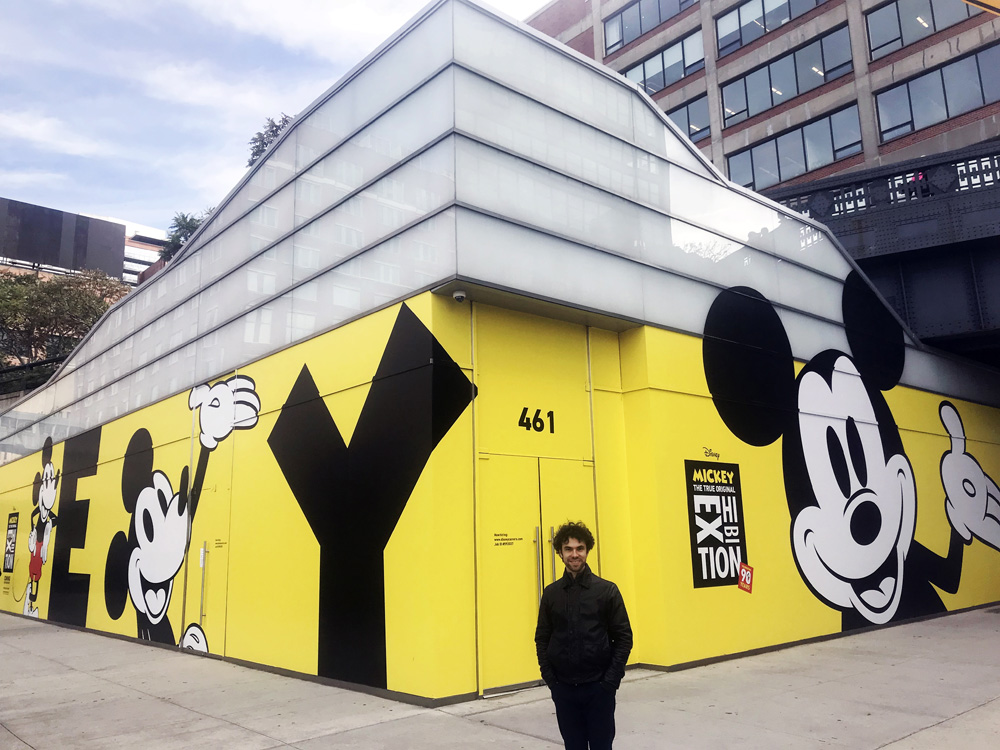 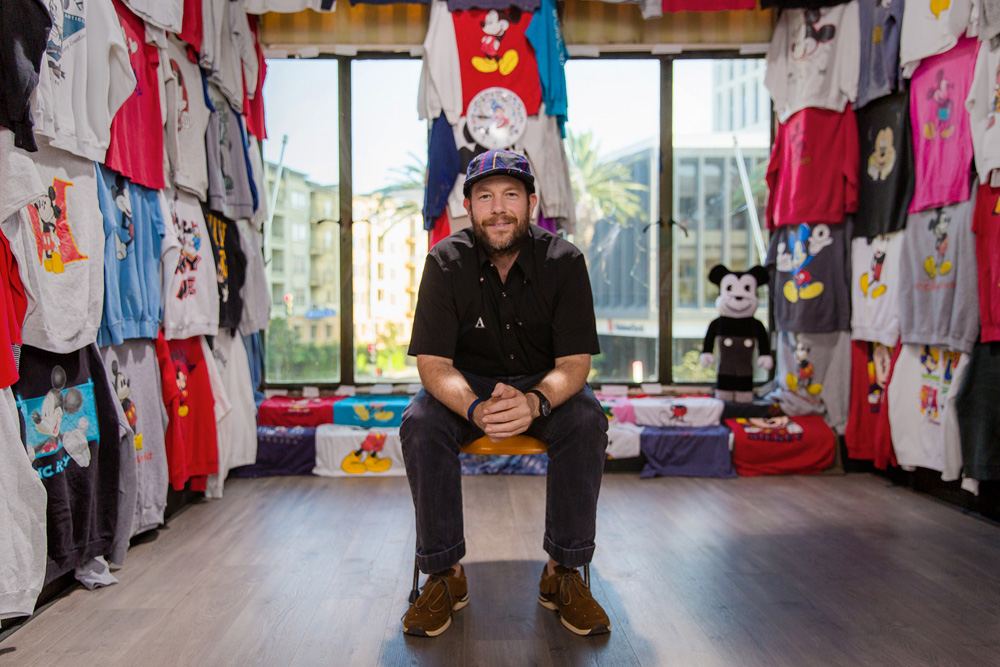 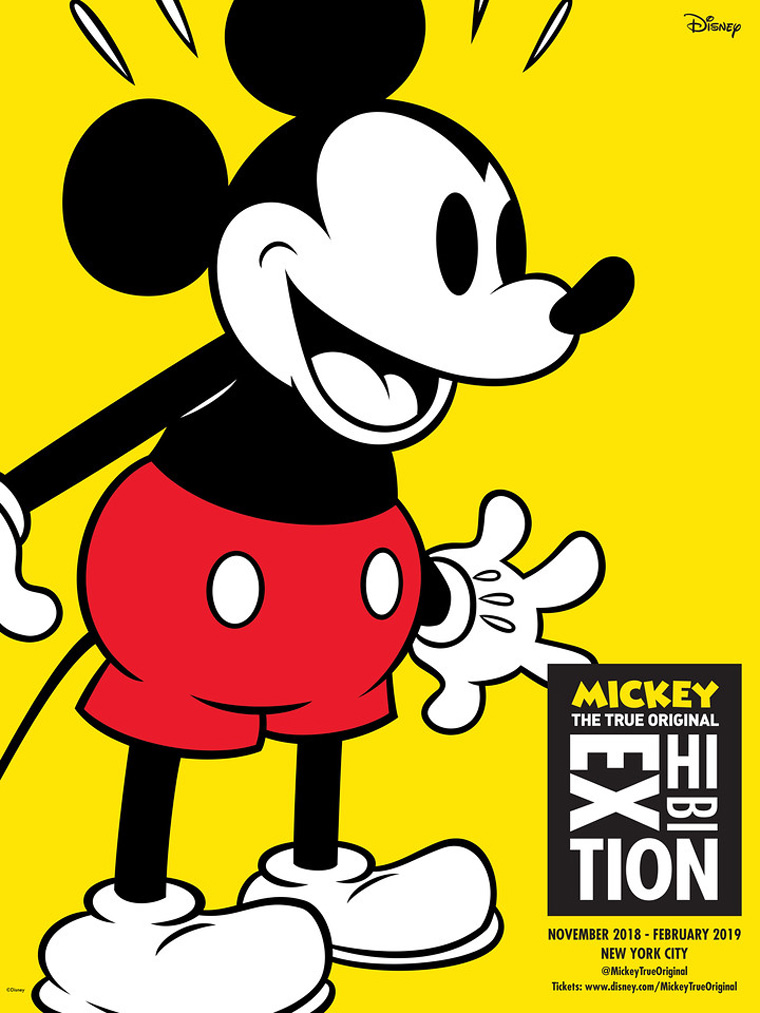