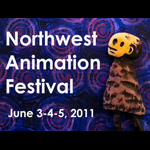 Submissions are being sought for the first NW Animation Festival, set for June 3-5 in Portland, Ore.

The festival, which will be held at the city’s historic 5th Avenue Cinema, is seeking animated films from all over the world with a particular focus on rarely seen films.

The deadline for submissions is May 1; early entries received by April 1 and student films have discounts on entry fees. Select films will join the Best of the NW Animation Fest traveling show, which will tour the region in the year following the festival.

For more information, check out the festival’s website at www.nwanimationfest.com.

You may also like...
Related Topics:Call for entries, NW Animation Festival, Oregon, Portland