The Academy of Motion Picture Arts and Sciences revealed Tuesday morning which of the year’s onscreen accomplishments will go for the gold as nominees in the 89th Annual Academy Awards. Finally, we found out which of the 27 contending animated feature films, and 10 shortlisted VFX titles and animated short films made the cut!

While animated projects didn’t manage to sneak into the Documentary, Foreign Film or Original Score categories despite strong contenders, it does bear special mention that 2017 will see the first fully animated nominee in the Best Visual Effects race since The Nightmare Before Christmas. And we have to give a shout out to Best Documentary nominee Life, Animated, by Roger Ross Williams.

The names were announced by an alumni class of previous nominees (including Guillermo del Toro, who advised that the newly honored “wear comfortable shoes” to the Oscars). The winners will be announced at the awards ceremony on February 26, 2017 in Hollywood.

Below is a select list of category nominees with direct animation and visual effects ties; for more information, see oscars.org. 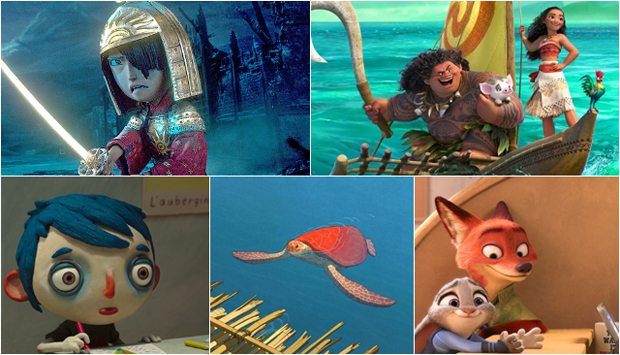 From Top Left to Bottom Right: Kubo and the Two Strings, Moana, My Life as a Zucchini, The Red Turtle, and Zootopia