The National Film Board of Canada had a successful run at this year’s Canadian Screen Awards, presented by the Academy of Canadian Cinema & Television. Productions and craftspeople supported by the NFB took home five awards at the ceremony this weekend, including the Best Animated Short prize for Torill Kove’s Me and My Moulton.

Released last year, Me and My Moulton is a 13′ 48″ 2D short about a seven-year-old girl who asks her hopelessly unconventional parents for a bicycle. But what kind of bike can you expect from a father who sports the only moustache in town and a mother who makes dresses out of curtain fabric? The film is produced by Marcy Page (NFB) and Lisa Fearnley (Mikrofilm AS).

The other NFB winners at the CSAs were David Dufresne’s Fort McMoney (Best Original Interactive Production Produced for Digital Media), Katerina Cizek’s A Short History of the Highrise (Best Original Program or Series Produced for Digital Media – Non-Fiction), Marie-Josee Saint-Pierre’s Jutra (Best Short Documentary) and Patrick McLaughlin for Best Cinematography in a Feature-Length Documentary in Everything Will Be. 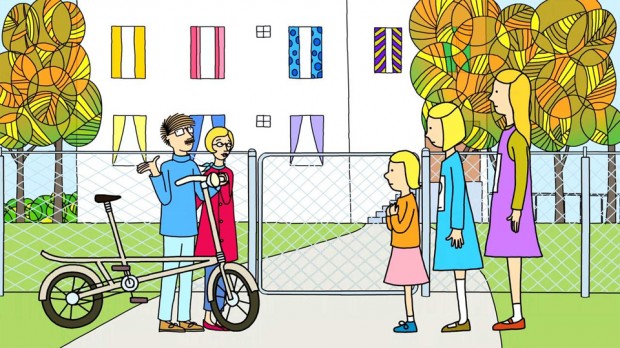