Written and directed by Fleming (I Was a Child of Holocaust Survivors, Big Trees, The Magical Life of Long Tack Sam), Window Horses: The Poetic Persian Epiphany of Rosie Ming centers on a young Canadian poet who is invited to perform at a poetry festival in Iran. Rosie lives at home with overprotective Chinese grandparents, and has never traveled anywhere by herself. Once in Iran, she finds herself in the company of poets and Persians who tell her stories that force her to confront her past: the Iranian father she assumed abandoned her, and the nature of poetry itself.

Rosie Ming is voice by Sandra Oh, who is joined in the cast by Ellen Page, Don McKellar, Shohreh Aghdashloo and Nancy Kwan. More than a dozen animators including Kevin Langdale, Janet Perlman, Bahram Javaheri and Jody Kramer worked with Fleming on the film. Window Horses is co-produced by Stickgirl Productions, Sandra Oh and the NFB (Shirley Vercruysse and Michael Fukushima), and distributed in Canada by Mongrel Media.

In the Short Cuts program, and already the recipient of four awards (including the Jury Award and Junior Jury Award from Annecy), is Ushev’s haunting Blind Vaysha. Adapted from a story by Bulgarian writer Georgi Gospodinov, the short centers on a unique girl named Vaysha whose left eye sees only the past, while her right eye sees only the future. Blinded by what was and tormented by what will be, Vaysha remains trapped between two irreconcilable temporalities, unable to see the present.

Ushev (Lipsett Diaries) uses an expressive, powerful visual style poised halfway between religious paintings and linocuts for this metaphoric tale, narrated by Caroline Dhavernas. Blind Vaysha was produced at the NFB by Marc Bertrand and executive producer Julie Roy, with the participation of ARTE France. 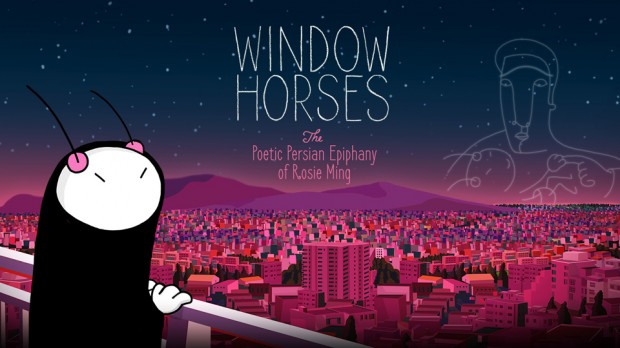