The latest animated feature by the Quay Brothers, titled The Metamorphosis by Franz Kafka will screen at the Museum of Modern Art in New York City on January 6 and 7. The closing event of the acclaimed exhibition Quay Brothers: On Deciphering the Pharmacist’s Prescription for Lip-Reading Puppets, the film was commissioned by Russian-born French pianist Mikhail Rudy in affiliation with Cité de la musique in Paris, where it premiered last March. The movie will screen with live piano accompaniment by Rudy, performing the music of Czech composer Leoŝ Janáek. The screenings are presented as part of MoMA’s The Contenders 2013 film series.

The Quay Brothers’ interest in Franz Kafka goes back to their days as design students at the Philadelphia College of Art in the late 1960s, and they originally conceived the notion of adapting Kafka’s best known story to film in the mid-1970s, in a series of drawings currently on view in the Quay Brothers gallery exhibition. Shot in digital video, The Metamorphosis by Franz Kafka is an avant-garde combination of stop-motion animation, puppetry, and live-action pantomime that recalls the Quays’ earlier encounters with the music of Janáek, the theater of Michel de Ghelderode, and the experimental storytelling strategies used in their British television documentaries with Keith Griffiths in the early 1980s.

As filmmakers, stage designers, and illustrators in a range of genres, the Quays have penetrated many fields of visual expression for a number of different audiences, from avant-garde cinema and opera to art for publications and television advertising. Beginning with their student films in the late 1960s, they have produced over 70 moving image works, including two feature films; music videos for Peter Gabriel, Michael Penn, 16 Horsepower, and His Name Is Alive; dance films; documentaries; and signature personal works such as Street of Crocodiles (1986), the Stille Nacht series (1988-2010), The Comb [From the Museums of Sleep] (1990), Institute Benjamenta (1995), In Absentia (2000), and The Metamorphosis by Franz Kafka (2012). 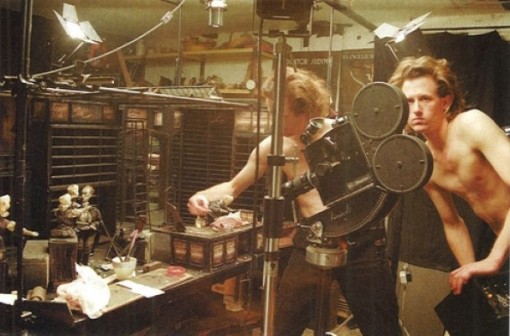