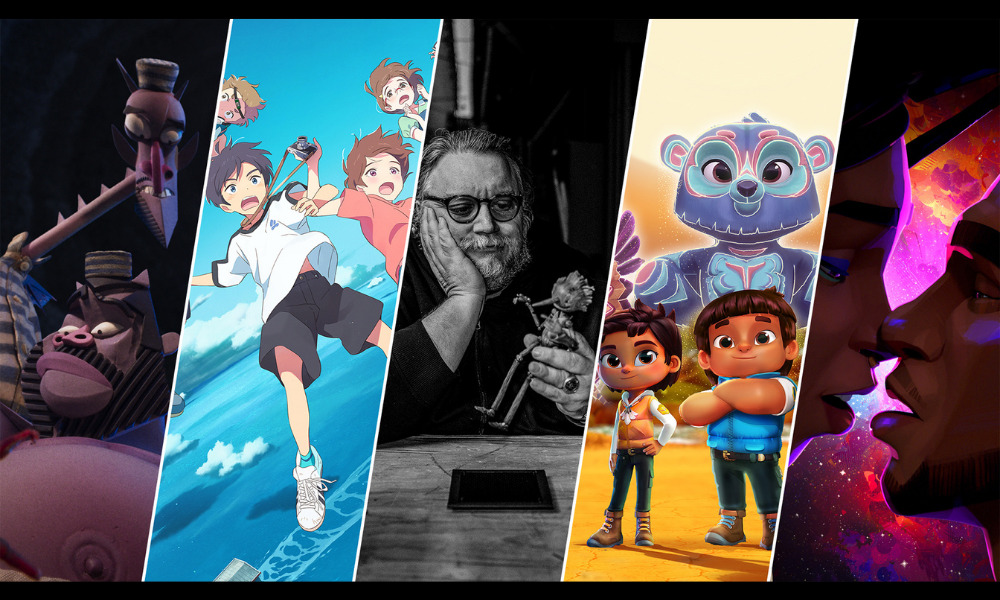 Showcasing their ambition to bring the best of animation and storytelling to its members around the world, the studio will present its Netflix Animation Showcase, inspirational masterclasses and the world premiere of The Sea Beast, an uncharted sea monster epic
adventure from Chris Williams; an exclusive first look at Guillermo del Toro’s Pinocchio, presented at the festival by the filmmaker himself; and a first look at Entergalactic from the creative minds of Scott “Kid Cudi” Mescudi and Kenya Barris.

On Monday, June 13 at 5 p.m., Peabody and Emmy Award winner Chris Nee, creator and executive producer of Doc McStuffins, the Annie Award-winning preschool series Ada Twist, Scientist, Ridley Jones and We the People begins the activities with a Masterclass session at Petite Salle Bonlieu. The focus of Nee’s masterclass will be on the power of inclusive storytelling and Karissa Valencia, creator of the upcoming Spirit Rangers, will join to provide an early look at the series.

On Wednesday, June 15 at 9 a.m., Sony Pictures Animation will present the Netflix adult animated series Agent King as part of their studio focus with Fletcher Moules, Robert Valley and Antonio Canobbio at the Impérial Palace.

Director Nora Twomey presents a Work in Progress on My Father’s Dragon at Salle Pierre Lamy on June 15 at 9:30 a.m. Inspired by the Newbery-honored children’s book from author Ruth Stiles Gannett, the film from five-time Academy Award®-nominated animation studio Cartoon Saloon follows Elmer’s journey as he struggles to cope after a move to the city with his mother and runs away in search of Wild Island and a young dragon who waits to be rescued. Elmer’s adventures introduce him to ferocious beasts, a mysterious island and the friendship of a lifetime.

The Netflix Animation Showcase begins at 1:30 p.m. on June 15 in Theater Bonlieu. Diving into the upcoming slate of animated series and films, from preschool and kids, to anime, adult, as well as family tentpoles, the showcase will feature on-stage and video conversations with Netflix’s team, creators and talent as they celebrate and showcase the variety of animated stories for all ages.

In addition to the much anticipated first looks at Pinocchio, Entergalactic and The Sea Beast, the Netflix Animation Showcase will feature a behind-the-scenes look at the making of Bad Travelling directed by David Fincher featured in Vol. 3 of the Emmy Award-winning series Love, Death + Robots created by Tim Miller. Plus:

Continuing the activities, on June 15 at 6 p.m. the world premiere of the monstrous adventure The Sea Beast, is set at Theater Bonlieu. The film is set in an era when terrifying beasts roamed the seas, monster hunters were celebrated heroes — and none were more beloved than the great Jacob Holland. But when young Maisie Brumble stows away on
his fabled ship, he’s saddled with an unexpected ally. Together they embark on an epic journey into uncharted waters and make history.

To learn more from behind the scenes of The Sea Beast, join director Chris Williams and the team behind the film at a Making Of session on June 16 at 2 p.m. at Salle Pierre Lamy.

In addition, Arcane, The Cuphead Show!, The House, Human Resources, Robin Robin and We the People are Official Selections screening in competition at the festival.

Read more about The Sea Beast and Netflix’s other festival highlights in the 35th Anniversary Issue of Animation Magazine (June/July ’22, No. 321), available at Annecy.