Each October, thousands of TV programming execs, buyers, animation producers and children’s entertainment pros gather at the MIPCOM market in France (Oct. 3-6) to buy and sell programming for the never-ending global appetite for content. We surveyed some of the new shows and developments and put together a brief wrap to bring you up to date on all the new toons in town.

Hot Barcelona-based studio BRB is back in action this fall with a new series that mixes old world charms with modern sensibilities. Co-produced by Screen 21 and TVE, Khuda-Yana tells the story of a young street thief named Khuda who awakens Blue Girl, a magical genie who tries to make a king out of him. 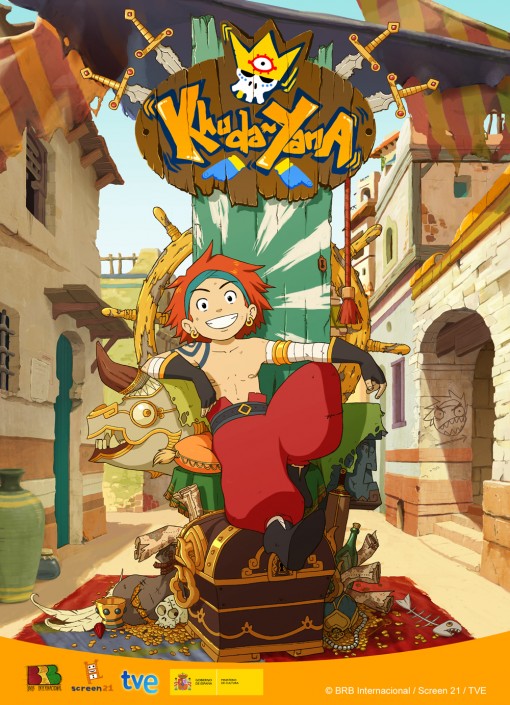 The beautiful designs of the 26 x half-hour series are inspired by the landscapes of Bombay, Alexandria, classic Athens and Renaissance Venice as well as modern New York and Japan.

BRB International’s VP Carlos Biern tell us that the show is quite different from the other programs he has on his slate, because it’s a story about destiny, power and discovering new worlds. “It’s a very special blend of genres and styles that moves smoothly from old legends to science fiction using all the diverse resources and narrative tricks that entertain modern audiences,” says Biern, whose numerous credits include Bernard, Suckers and Canimals. Having seen the veteran producer’s winning track record, we can’t wait to get on board Khuda’s magic carpet ride.

Hang On to Your Tall Hat

Toronto’s Comet Entertainment (Santa vs. Claus, Around the World for Free) has teamed up with Big Coat Productions to launch Tall Hats, a new children’s animated venture that will debut at the MIPCOM market. Comet’s CEO Raquel Benitez tell us, “We’re very proud of this joint venture and believe in the vast experience of this newly formed unit to benefit the quality and marketability of this show.” 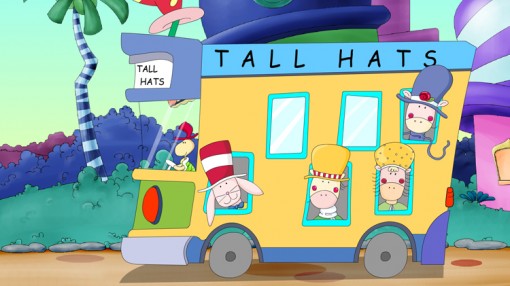 “This is simply an evolution of a great friendship, the belief in an incredible TV program and a solid, internationally respected animation company,” adds Maria Armstrong, CEO of Big Coat.

So, what makes this 52 x 7 preschool show special? “It celebrates the art of imagination and heartfelt storytelling,” say Benitez. “Its about a kinder, gentler world which teaches children the importance of sharing and caring for one another. As the story explains, ‘Once you meet a Tall Hat, you suddenly realize what is special about you.’”

Take one look at the design and color palette of the show, and you know it’s going to capture lots of little hearts. And that’s not even considering how many hats it’s going to sell!

It’s been about 37 years since German TV channel ZDF’s audiences first got to meet Vicky the Viking, a charming animated hero based on popular books by Swedish author Runer Jonsson. Global children’s entertainment giant Studio100 is now bringing the young warrior back to CG-animated life with a great-looking 78 x 13 show that will be bowing at the market this year. 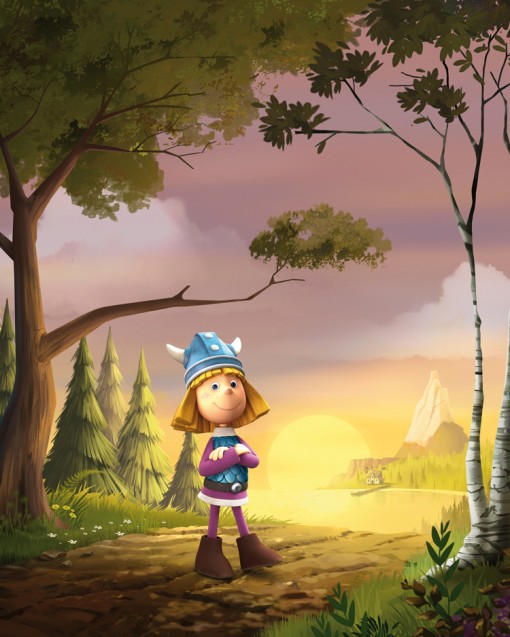 The new 3-D toon targets five- to eight-year-old audiences and follows the adventures of the little, yet powerful, Viking who has a never-ending supply of good ideas. The CG-animated show will be produced by Paris-based Studio100 Animation, ZDF (Germany) and Flying Bark Productions (Australia).

Managing director of Studio100 Patrick Elmendorff tell us that Vicky the Viking, along with his other big CG shows Maya the Bee and Heidi are the kind of shows that are timeless and can be introduced to new generation of animation fans, thanks to new technological advancements. “It is always important to stand out from the crowd by offering a wide range of genres, which affects various tastes,” he adds. “With our extensive library of new and existing programming which we will offer to buyers, we expect to sell our key properties into an increasing number of European markets.”

Of course, having a tough little Viking to help you with your sales battles helps, too!

Tom, the main hero of FremantleMedia Enterprises’ awesome new 3-D toon Tree Fu Tom, is not your typical eight-year old. When he puts on his magic belt, he gets to deliver some amazing action movements (known as Tree Fu in some fancy circles) and is transported to an enchanted kingdom in a tree called—what else?—Treetopolis! That’s where he meets his sidekick, Twigs (voiced by David Tennant, a.k.a. Dr. Who) an energetic Acorn Sprite (don’t ask).

The  26 x 22-minute show invites young audiences to move around with Tom (voiced by Sophie Aldred), so it actually makes watching TV a healthy activity for the young ones. Created and produced by Daniel Bays, Tree Fu Tom is a co-production between CBeebies In House Production and FremantleMedia Enterprises (FME). Jackie Edwards and Alison Stewart are exec producers for the BBC and Bob Higgins and Sander Schwartz are the big execs for FME.  U.K.’s Blue Zoo Animation studio handles top-notch CG animation.

“We’re tremendously proud of our involvement with this exciting new show and can’t wait to introduce Tom to the U.K., and the world,” says Bob Higgins, senior VP of kids and family entertainment at FME. “This is a program with strong, funny characters, adventurous storytelling and a unique integral component which at its heart promotes exercise and good health. We can’t wait for kids around the globe—and maybe some of their parents!—to begin mastering their Tree Fu.” You had us at Acorn Sprite, Bob.

Bickering buddies who find themselves in all kinds of trouble have been the staple of awesome comedies since the early days of show biz. Think Abbot and Costello, Lucy and Ethel, Oscar and Felix! Foothill Entertainment has taken that classic premise and given it tails in The Adventures of Raz & Benny (well, three tails, if we include their girl pal Lilly). The CG-animated show takes us along as the two mice—one cautious, the other danger-loving—find themselves in wild situations, as international spies, racecar drivers, submarine rescuers or jungle explorers. 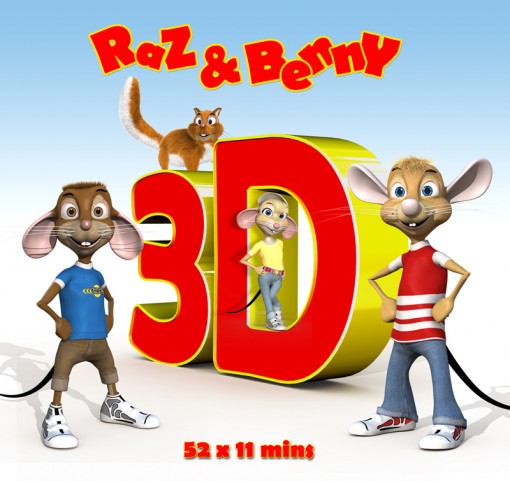 The Adventures of Raz & Benny

“Having grown up with iconic animated series like Tom & Jerry, Chip ‘n Dale and Rocky & Bullwinkle, we see Raz & Benny as a contemporary take on these classic shows,” says the globetrotting Foothill president Jo Kavanagh-Payne. “But because this will be produced in stereoscopic 3-D, we think the visual comedy that is a huge part of these types of buddy programs is really going to be unique!” We wonder if they’ll ever come face to face with their number-one enemy, Mr. Mousetrap?

Some parents would give anything to find a mysterious object that would keep their moody, restless teens occupied. They should look into Pink Rock, a most mysterious source of energy that captures the attention of four boys and two girls in the new animated show BondiBand. 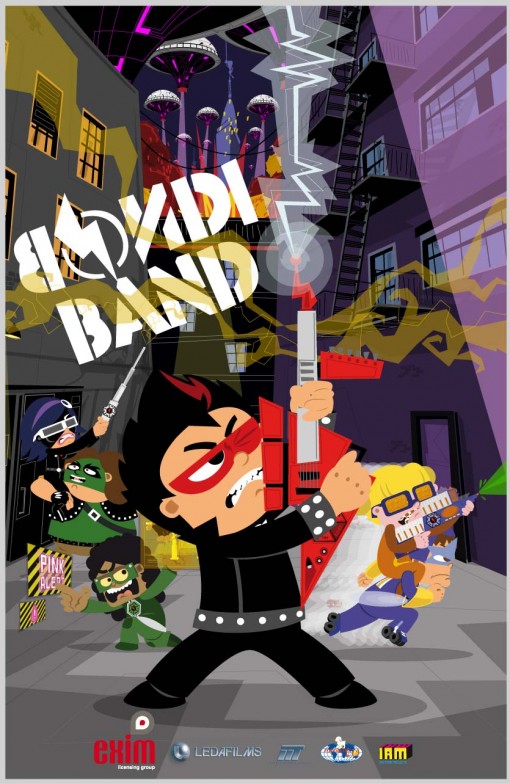 Apparently, this Pink Rock is buried under their city, and this young team decides to form a rock band as some sort of disguise, so they can transform themselves into superheroes and fight all kinds of crazy battles. As the press notes warn us, “Their lives will never be the same!” Especially when they have to stop the evil Miss C. Lebrity from tapping into their power rock. Did we mention they also sing?

This high-energy 52 x 15-minute show was created by Buenos Aires-based Exim Licensing Group and IAM (Ideas A Medida) and is a co-production between Mondo TV, Exim and Ledafilms. The high-def Flash animation for the series is produced in Argentina. With an estimated budget of $3 million, the toon will be ready for delivery by December of this year. Disney XD Latin America has already nabbed the Pay TV rights for the series.

“BondiBand offers a great mix of humor, action and music together with very strong animation designs,” says Eric Belloso director for EMEA and Asia. “We strongly believe that all those elements together will really drive young audiences to our show.” Just make sure they all stay away from that crazy Miss C. Lebrity!

Tapaas Chakravarti, one of our favorite global animation titans, and his team at DQ Entertainment will be back at MIPCOM once again, bringing a super collection of new CG-animated series. One of the Indian-based company’s big projects this year is the adaptation of Edith Nesbit’s classic children’s book Five Children and It. A co-pro with Canada’s Yowza Animation and Luxembourg’s La Fabrique, this modern adaptation of the 1902 classic will be called 5 & It. Germany’s ZDF Enterprises has already come on board the 3-D (52 x 11) project. 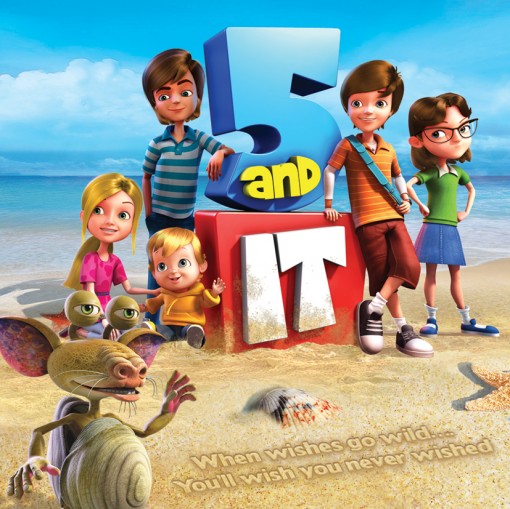 The show follows the adventures of five kids (Cyril, Anthea, Jane, Robert and baby William) who befriend a bizarre sand fairy near their uncle’s beachfront mansion. The Psammead offers to grant them one wish each day, which of course means they’re going to learn not to trust tricky creatures they find in the sand!

The team at DQE also tell us that their other new reading of a classic property The Jungle Book will begin production on its second season soon. The CG-animated adaptation of the Rudyard Kipling classic is co-produced by DQE, ZDF, TF1 and Moonscoop. The studio is also producing a feature film based on the tale of Mowgli and Baloo.

You want more? Well, they’ve got more! DQ is also working on the second season of the girl-centric toon Spike Team (about six dynamic volleyball playing young girls and their super coach Lucky), which is co-produced by TeamWorks, Rai Fiction and Lucky Dreams. Also on their slate is Escape Hockey, a co-pro with Spain’s Imira and created by Enne Entertainment, an animation studio based in Salamanca, Spain. This unusual 26 x 26 action comedy tells the story of a boy and his dog and a few unsuspecting friends have to fight for their lives after being transported to a strange planet.

Now that’s what you call a busy toon house—and we don’t even have the space to tell you about DQ’s other shows like The Little Prince and Little Nick.

What better way to teach the little monsters in your home than three shiny new CG-animated monsters. Bob, Lily and Goo are the three stars of DHX Media’s Monster Math Squad. As the press notes let us know, the three creatures love nothing better than to put their monster minds together and use their math skills to overcome any obstacle they face—even ones with two left feet or ten thumbs! 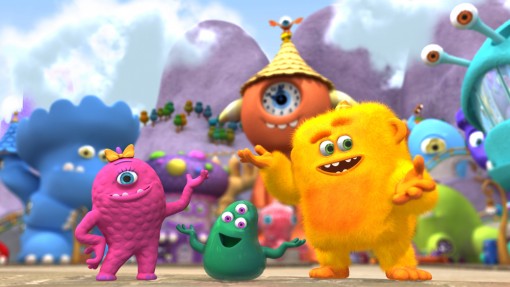 Created by DHX Media’s Jeff Rosen, who also gave us great toons such as Animal Mechanicals and Bo on the Go, the series promotes the love of math at an early age, and wants kids to know that counting, measuring, sorting, shapes and patterns can actually be fun! Canada’s CBC and SRC have already signed up for the 30 x 12 show, because they know they can count on the show to get huge numbers. (Rim shot, please!)

Who doesn’t want a super-powered, shape-shifting robot as a friend? Like Brad Bird’s classic feature Iron Giant, Imira’s wonderful new show, Lucky Fred taps into a notion that can appeal instantly to kids all over the world. 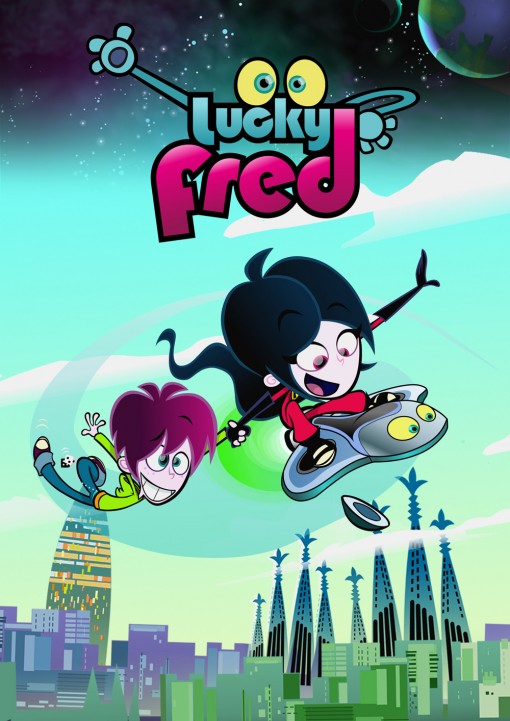 Fred, the young protagonist of the show, happens to befriend a robot that was sent to Earth to aid the weird girl next door, who is actually a secret intergalactic agent—but that’s another story. Created by Myriam Ballesteros (Lola & Virginia) the show targets six- to 12-year-old audiences.

To make the toon even harder to resist, Imira plans to launch mobile-based interactive treasure hunts via Facebook and Lucky Fred websites. After all, you don’t need shape-shifting robots when you can win cool prizes just by following clues on your cell-phone.