Visitors to New York’s popular Museum of Modern Arts will have the change to enjoy a fantastic exhibit featuring over 300 pieces by the influential stop-motion animators Quay Brothers this month. The special retrospective (August 12 – January 7, 2013) includes never-before-seen cross-disciplinary works and a complete film and video tribute.

As filmmakers, stage designers, and illustrators in a range of genres, the Quays have penetrated many fields of visual expression for a number of different audiences, from avant-garde cinema and opera to art for publications and television advertising. Beginning with their student films in the late 1960s, they have produced over 70 moving image works, including two feature films; music videos for Peter Gabriel, Michael Penn, 16 Horsepower, and His Name Is Alive; dance films; documentaries; and signature personal works such as Street of Crocodiles (1986), the Stille Nacht series (1988–2010), The Comb [From the Museums of Sleep] (1990), Institute Benjamenta (1995), In Absentia (2000), and The Metamorphosis by Franz Kafka (2012).

An accompanying film exhibition, Lip-Reading Puppets: The Curators’ Prescription for Deciphering the Quay Brothers, runs August 9, 2012–January 7, 2013, in The Celeste Bartos Theater. Presented in conjunction with the gallery exhibition, this complete retrospective of the Quay Brothers’ film and video works was organized to encourage an appreciation of their versatility across a range of moving-image genres. This series of twice-monthly screenings includes shorts, dance films, documentaries, music videos, commercial spots, and their two feature films. The series opens with screenings of MoMA’s new 35mm print of the Quay Brothers’ first feature, Institute Benjamenta (1995), a luminous black-and-white adaptation of the novel Jakob von Gunten, by Swiss writer Robert Walser, one of the literary outsiders whose work has been a major inspiration for the Quay Brothers. This exhibition is organized by Ron Magliozzi, Associate Curator, Department of Film, The Museum of Modern Art. 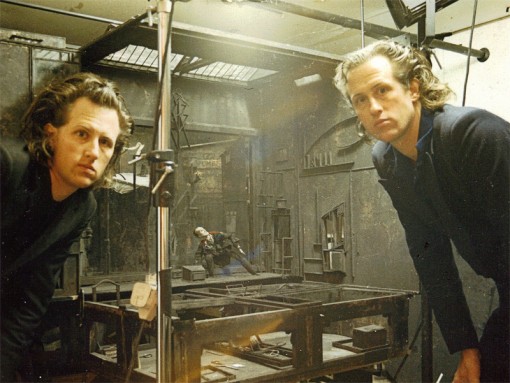