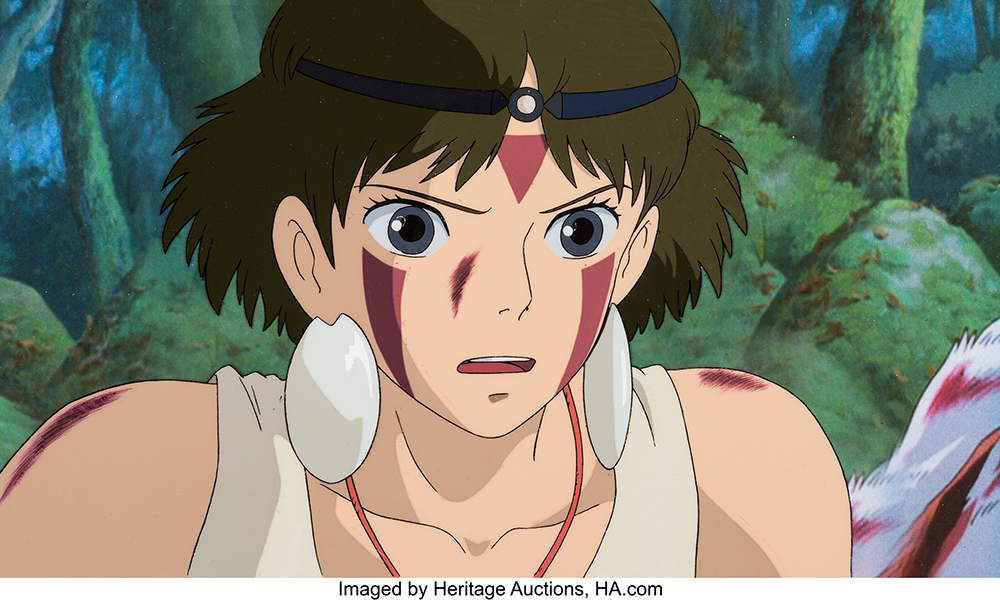 Anime fans and collectors will find must-have treasures in Heritage Auctions’ Art of Anime and Everything Cool II Animation Art Signature Auction Dec. 10-13. The event will feature more than 700 anime lots, including items from legendary anime properties, among them Akira, Dragon Ball Z, Sailor Moon and, of course, Studio Ghibli.

There are dozens of pieces from Ghibli in this auction, among them production cels from masterpieces, including My Neighbor Totoro (1988), Kiki’s Delivery Service (1989) and Princess Mononoke (1997) — works from the Oscar-winning studio co-founder Hayao Miyazaki, a man film critic Matt Zoller Seitz once called “arguably the most innovative and accomplished mainstream animation auteur after Walt Disney himself.” Miyazaki’s work is currently on display as part of the opening exhibitions for the Academy Museum of Motion Pictures in Los Angeles.

“The success of our June Animation Art auction, which brought $2.1 million, and our sale in August that reached $4.5 million spotlight the surging demand for top lots in this category, and this event is full of them,” said Jim Lentz, Heritage Auctions Vice President and Director of Animation & Anime Art. “This auction is an incredible event with more than 700 anime-specific lots from a wide array of exceptional artists, an absolute treasure trove that serious collectors can not afford to miss.”

The sale is Heritage’s fourth of the year and the first to span four days – an event made necessary by the deluge of outstanding offerings among the more than 1,500 lots that will cross the block. 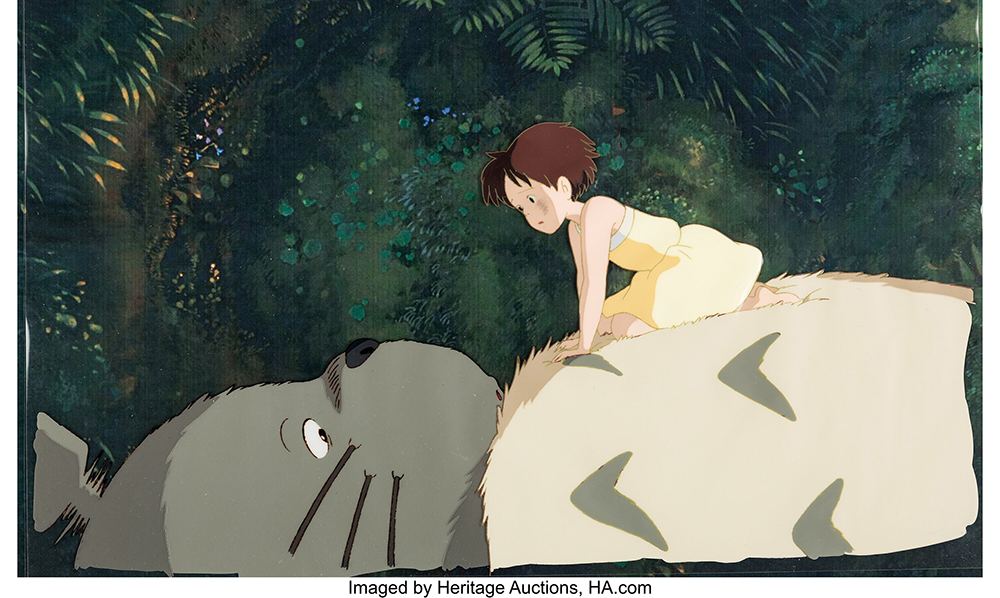 Highlights of the items up for auction from the acclaimed Japanese director include a production cel setup from My Neighbor Totoro, featuring a desperate Satsuki looking to the forest spirit Totoro for help, is a rare offering from this beloved film that essentially established Studio Ghibli as the modern animation benchmark. This scene, from the 1:18:03 mark, is as memorable as any in the film. Any work featuring Totoro is scarce and highly coveted, which explains why bidding was up to $14,000 – well beyond its $10,000 estimate – with more than two weeks left before the live auction. Another piece from the film sure to spark a bidding war is an outstanding production cel featuring the weird and wonderful Catbus.

On the subject of buses, fans can look to a production cel setup and animation drawing from Kiki’s Delivery Service, in which the title character narrowly dodges traffic on her first day in a new bustling coastal city. This offering contains something of an Easter egg, too, for fans of the filmmaker and his studio: Look closely at the bus, and you can see it features a charming detail easily missed in the film, a logo that says “Studio Ghibli.”

An original drawing of Nausicaä, princess of the Valley of the Wind, by the hand of Miyazaki himself, is exceptionally special and undeniably rare. Nausicaä of the Valley of the Wind was his second animated feature after The Castle of Cagliosto, and while it was made before Miyazaki co-founded Studio Ghibli, it is widely considered part of the Studio Ghibli canon. This piece is also signed by Miyazaki and dated August 4, 1987. 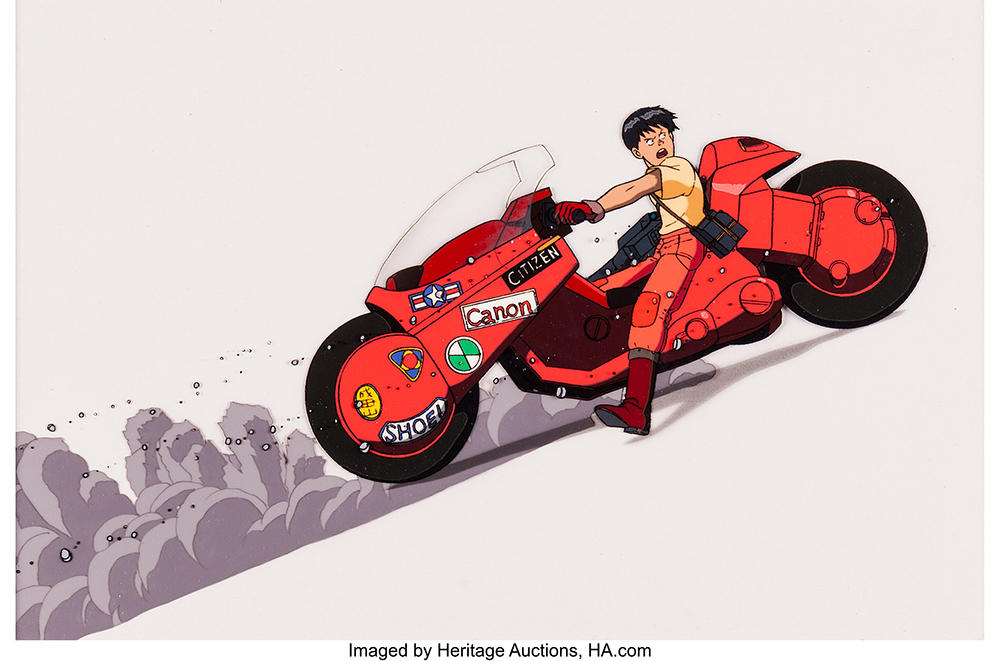 Considered the seminal Japanese manga and later adapted as an animated theatrical film in 1988, Akira is a classic in any medium. Set in a dystopian future in the aftermath of a nuclear disaster and war, the vast story deals with corruption, rebellion and a struggle for what’s best for society. The anime sale features a nice pile of production cels from the 1988 film, including cels that feature the red motorcycle frequently seen in the press materials for the film (estimate: $10,000+). This is a chance to own a piece of a mainstream breakthrough that changed how the world saw manga.

Other Akira lots include, but are not limited to: 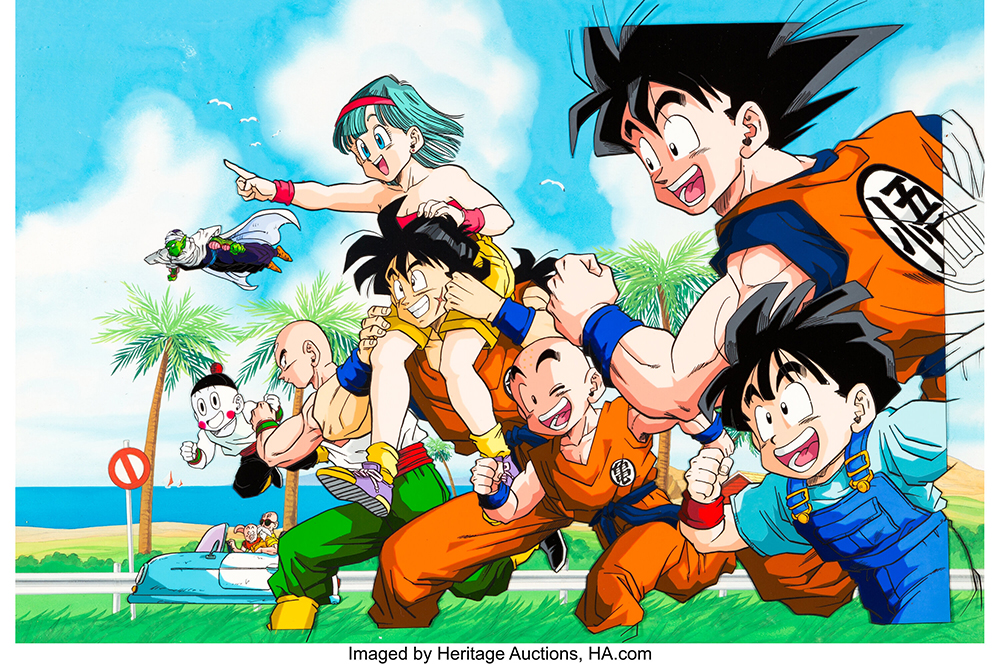 Originally released in the mid-1980s as a manga, the Dragon Ball franchise (especially with its Dragon Ball Z entry) is known as one of the biggest and most regarded anime franchises of all time. With a series and films, there is a long list of hit properties from this umbrella. Nearly 100 production cels and animated drawings featuring the artwork from Toei Animation are a major component of this auction. From group shots to action shots to individual shots, there is plenty of variety to choose from.

Top Dragon Ball Z choices include, but are not limited to: 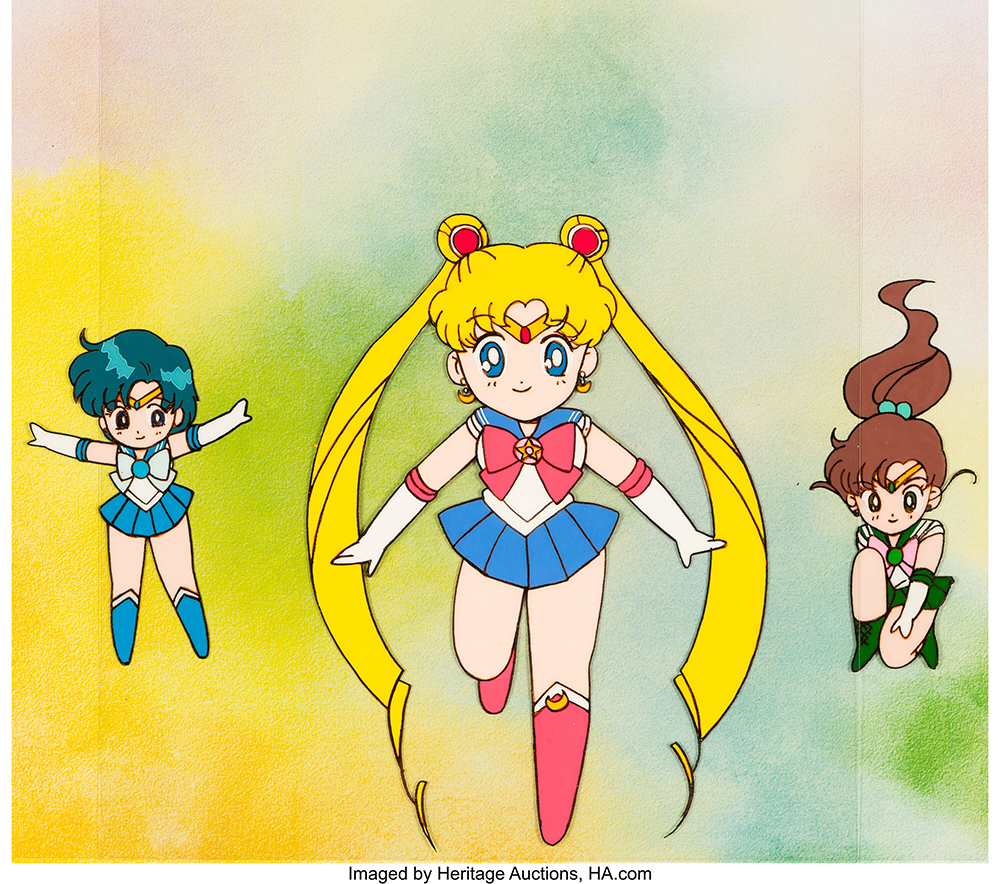 Known as the quintessential “magical girl” manga, the Sailor Moon franchise started in the 1990s and remains one of the best examples of Shōjo manga. Almost 60 lots in this auction contain production cels and animated drawings of a vast array of action shots from the property.

Top Sailor Moon lots include, but are not limited to: 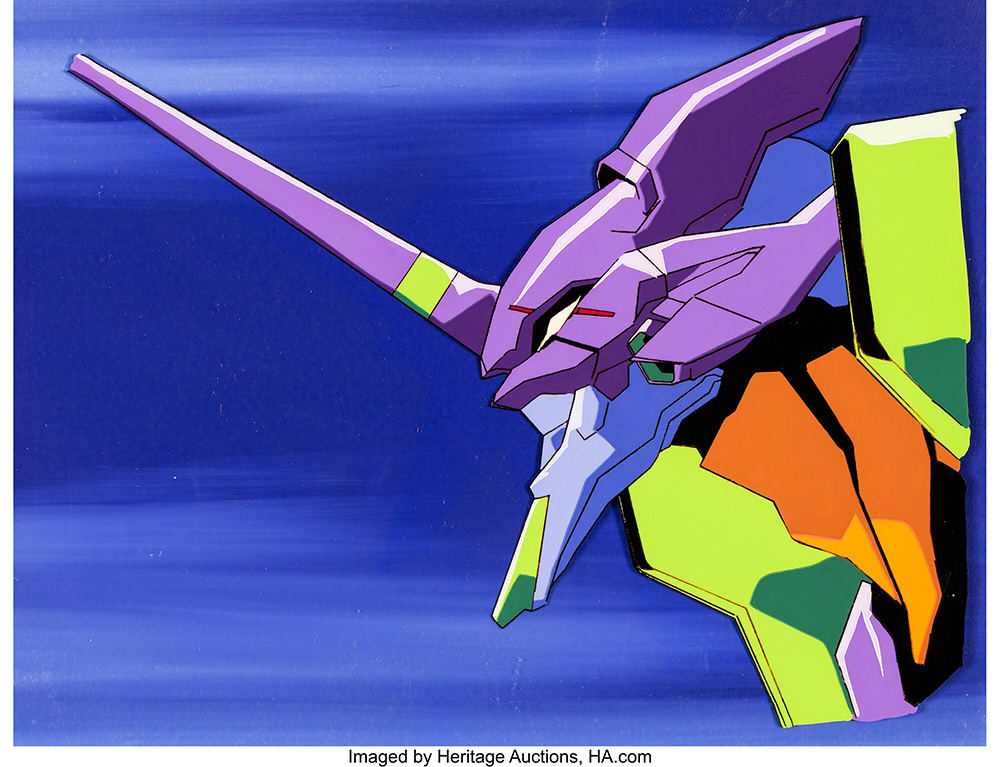 A Japanese mecha anime television series animated and produced by Gainax and Tatsunoko and directed by Hideaki Anno, Neon Genesis Evangelion was set 15 years after a worldwide cataclysm in the futuristic city of Tokyo-3. Teenaged Shinji was recruited by his father, Gendo, to the organization “Nerv” to pilot a massive bio-machine mecha named “Evangelion” against adversaries known as “Angels.”

Top Neon Genesis Evangelion lots include, but are not limited to: 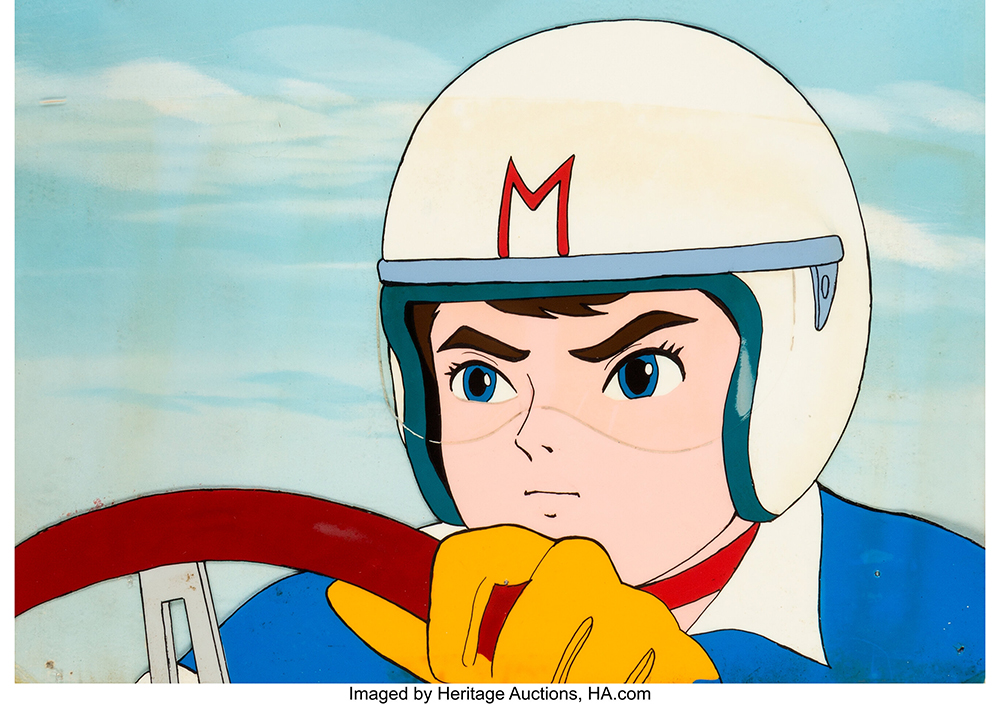 Also known as Mach GoGoGo, Speed Racer is a Japanese television show about auto racing. Originally serialized in Shueisha’s 1966 Shōnen Book that originally was released in tankōbon book form by Sun Wide Comics and later re-released in Japan by Fusosha. It was adapted into anime by Tatsunoko Productions and aired from April 1967 to March 1968. In the United States, the program aired on ABC.

The sale includes six Speed Racer lots, including but not limited to:

Other top properties in the sale include Astro Boy, Ghost in the Shell and Cowboy Bebop, the latter now a live-action Netflix series starring John Cho.

For images and information on everything in the auction, visit HA.com/7267.