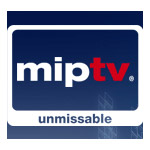 This month, international producers and distributors will unveil some of their new animated content at the annual market known as MIPTV. We thought it would be a good idea to sample 10 of the hot new toons that will be available for pick-up at the confab. In some cases, it might be several months before we can actually see these shows in their finished form on our local outlets, but it never hurts to be knowledgeable about what may be the next big thing on the toon radar!

Pirata y Capitano (The Pirate and the Captain) 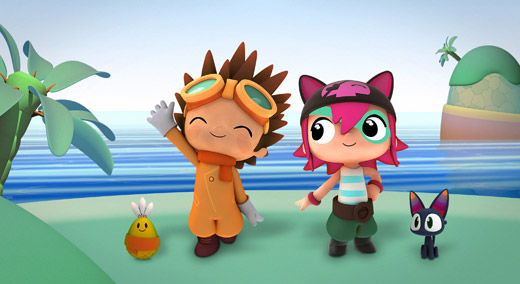 Created by: The show is the brainchild of David Cantolla, founder of Zinkia, co-creator and director of Pocoyo and currently partner at Vodka Capital and exec producer on Vodka Capital’s other hot toon Jelly Jamm (in close collaboration with Jesus and Emilio Gallego, creators of Shuriken School).

Synopsis: This colorful preschool comedy/adventure series centers on a spunky girl pirate and a boy pilot who have fun adventures in the Great Sea.

Stand-Out Qualities: According to the producers, the character design and overall visual aesthetic for the show are two of the key factors that sets the show apart. “Going a bit deeper, the depth of character development, vehicle integration (opens world of discovery), story potential and the desire to create a true preschool comedy adventure show really help set it apart from other shows. Even though there is some wonderful content out there, we still feel that there is huge potential for very high quality productions that target the slightly older age range of traditional preschool offering very visual, cute, value-infused stories that are dynamic and great fun.”

Exec Quote: Vodka Capital CEO Steven Posner notes, “The show is two parts Miyazaki’s Porco Rosso, a pinch of Totoro, two parts Doraemon, four spoonfuls of Pocoyo, one spoon of SpongeBob and a little dash of classic Flipper movies. Then the show was seasoned with spice from some of our favorite classic pirate movies of all time.” 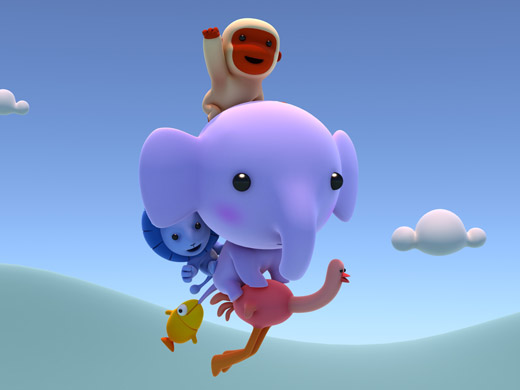 Target Audience: According to awol’s managing director Julie Fox, it’s six to 66, but the core target audience is probably boys, six to 10.

Synopsis: This beautifully designed, CG-animated series chronicles the everyday life and adventures of a baby gorilla and his friends from the banana village. The memorable cast of characters include a fish out of water, a baby lion who can’t wait to grow, a pretty-in-pink ostrich and an always-famished elephant.

Stand-Out Qualities: “The show has fantastic graphics and a offbeat (decalé) sense of humor which is totally unexpected,” says Fox. “It’s not politically correct, and for that reason, everyone falls in love with it. The animals represent all the fragilities of human nature and we laugh at them (and their vanities, needs and innocence) because they are so touching.” 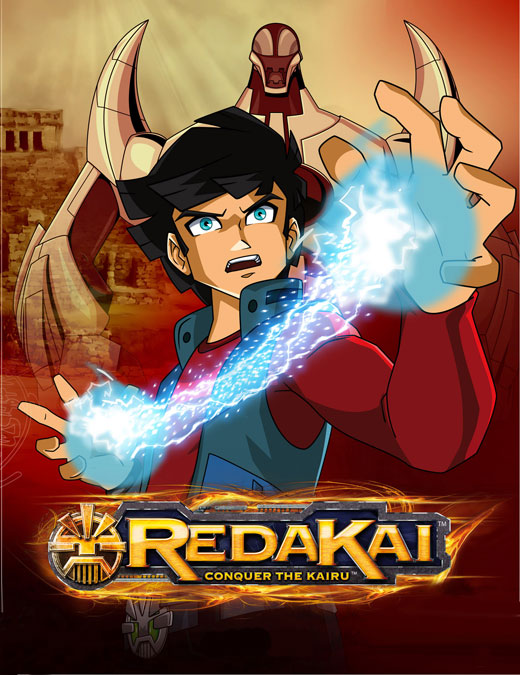 Synopsis: This eagerly anticipated animated series centers on Ky, a 15-year-old student of ancient martial arts who embarks on an incredible quest to find the Kairu, a primordial alien energy force. Helped by his friends Maya and Boomer, Ky travels the globe looking for the Kairu to protect it from his extraterrestrial teenage opponents, with the hope that one day he will become a Redakai, the greatest Kairu warrior of them all.

Stand-Out Qualities: “There are many boy action properties in the market, but very few adventure properties for boys. This is what we set out to do with this show: It deals with a mysterious energy, an amazing race around the world to find it, and extraordinary landscapes reminiscent of the Indiana Jones movies,” says Michel. The production budget is an estimated $20 million, while the total property launch budget (includes top development) is over $50 million. 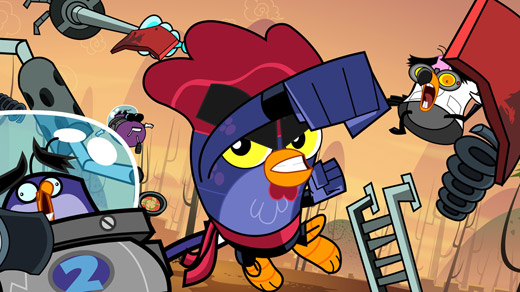 Synopsis: Chuck and his two best friends Flick and Wing run the number-one security service in the island of Rocky Perch. They offer Kung Fu-style security to the bird residents of the island, with the aid of a magical Golden Egg which transforms Chuck into the kick-butt hero, Kung Fu Chicken. Of course, no tale would be complete without an intriguing villain, which in this case is none other than Dr. Gringo, the vicious Pink Flamingo who despises everyone’s favorite chicken!

Stand-Out Qualities: “The character designs are very different from what’s out there, Also, the concept is focused more on comedy rather than the fighting,” says Animasia’s managing director Edmund Chan. “It’s more like a Jackie Chan movie where most of the fighting scenes are not too violent but can be funny at times. It’s also interesting to share that the show’s creator had always wanted to produce a high energy action/comedy series. The concept came to him surreptitiously one day as he was eating a meal at Kentucky Fried Chicken: This is how he came up with the name Kung Fu Chicken which shares the same initials K.F.C.! This high-quality 2D animated series will be produced in high definition with Flash.” 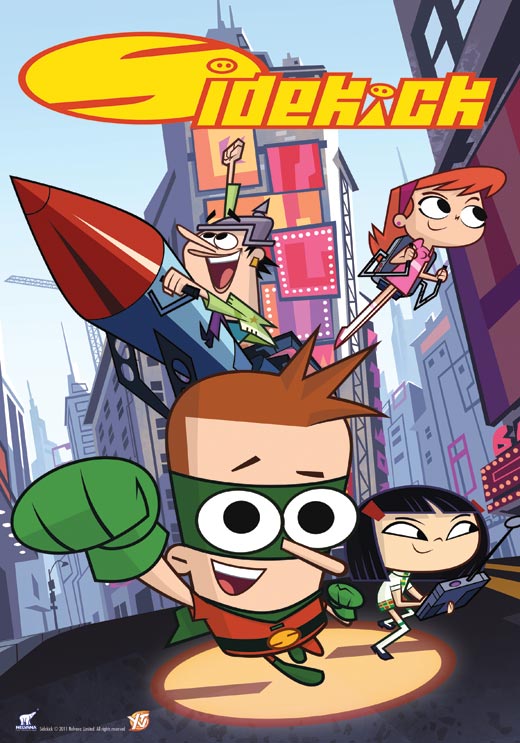 Created by: Joey So and Todd Kauffman

Synopsis: A hilarious action-adventure comedy about bosom buddies, Eric and Trevor, doing the best they can at being superhero sidekicks. With access to a secret lair outfitted with the most elite gadgets, these wannabe sidekicks get their fair share of action battling the bad guys. Eric is training to be the sidekick to the greatest superhero, Maxum Man, and Trevor, the son of the greatest super villain, is destined to be a super evil-doer. They both attend the Academy for Aspiring Sidekicks, where there are plenty of lessons to learn about life, friendship and saving the world.

Stand-Out Qualities: “This buddy comedy show is about having fun, with a broad appeal to both boys and girls, and their parents—so it’s great for co-viewing,” says Jerry Diaz, Nelvana’s VP of worldwide sales and distribution. “Done in the classic ‘squash and stretch’ style of animation, nothing is technically off limits for the physical comedy. Wacky comedy is the number one objective in Sidekick. Most of all, the series already has a great track record: It’s airing to great ratings on YTV in Canada and Nelvana will be announcing more broadcasters soon.” 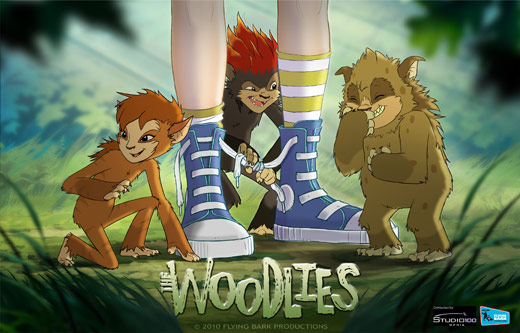 Synopsis: Based on the award-winning book No Cookies for Trolls by German author Cornelia Funke (Inkheart), this charming 2D animated series revolves around the squirrel-sized residents of a magical forest, who are on a mission to protect their home from the human “Uglies” and get their paws on the biggest stash of food they can find. Stories are a light mix of action, adventure and comedy, many with ecological themes.

Animation Style: Hybrid animation, combination of 3D characters on 2D backgrounds. Characters will be Toon Shaded to give them a 2D look, which will help them fit into the environment, while sustaining all the advantages and feel of contemporary 3D animation.

Stand-Out Qualities: “We wanted to give the characters their own special and unique design and introduce a special kind of social aspect such as living in harmony together and with humans even though different from one another,” notes Patrick Elmendorff, managing director of Studio100. “That’s why we called them the ‘Woodlies’ since they are neither trolls nor ghosts nor goblins. Their magical world resembles the world of kids and has a strong ecological aspect, with the message that says, protect your environment and let there be harmony between humans and the creatures in the woods. The quality of the animation and the design, especially of the characters and of the backgrounds, is outstanding and goes far beyond the quality of a standard TV series.” 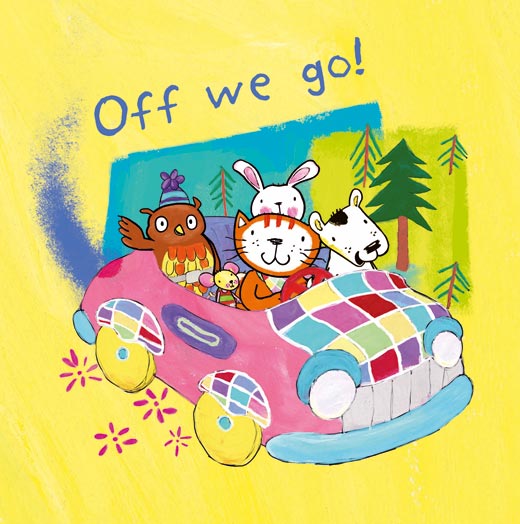 Synopsis: This beautifully animated preschool series is based on the popular book series about the fun adventures of an imaginative cat, who is voiced by Joanna Page (Gavin and Stacey).

Stand-Out Qualities: “There’s a real handmade quality to the animation [which is produced with CelAction and Photoshop] and is based on the charming artwork of the children’s author Lara Jones,” according to showrunners Eryk Casemiro and Kate Boutilier, whose many credits include the Rugrats series and movies, Olivia and The Mr. Men Show. “The storylines are driven by our main characters and young viewers can tag along on their fantasy adventures. The show is truly unisex and both boys and girls can enjoy the playful aspects of Poppy Cat’s world and the comedy dynamics in this colorful community of animal friends.” 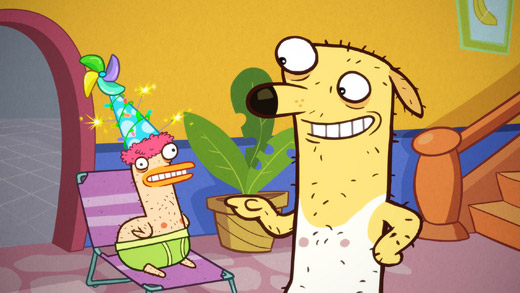 Synopsis: The offbeat 2D animated adventures of a group of free-spirited animals in their underwear that run a beach-front hotel like kids at a summer camp—and do their best to make each day more fun than the last. Lead dog and hotel manager, Howie, who has the attention span of an 11-year-old in a video arcade, heads the dysfunctional and hilarious ensemble cast.

Stand-Out Qualities: “The show has been performing very well since it debuted on YTV this past January,” notes 9 Story president and CEO Vince Commisso. “We are very pleased with the way audiences have responded to the series’ excellent comedy and Noah’s very distinctive drawing style and sense of humor. We took a lot of care during the show’s development to make sure the characters, the pacing and the tone of the show was just right.” 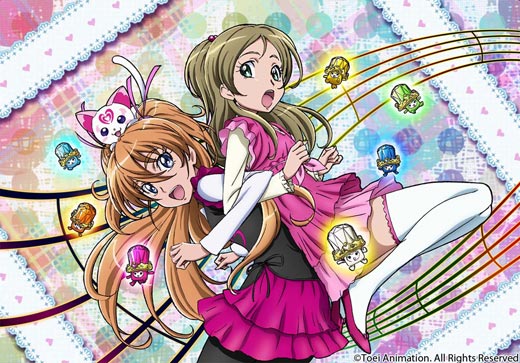 Produced and Distributed by: Toei Animation

Synopsis: Junior high students Hibiki and Kanade are visited by a fairy named Hammy from the musical country of Major Land and are invited to become Pretty Cure warriors. The girls join in the battle against an evil force bent on destroying the world by turning Happy Melody to Unhappy Melody.
Stand-Out Qualities: Originally introduced in Japan by Toei in 2005, the series enjoyed a popular run on Animax, TV Asahi and Asahi Broadcasting Company. Directed by Daisuke Nishio (Dragon Ball Z and Air Master), this charming series is above the standard “magical girl” anime fare and offers high-energy animation, colorful backdrops and a pair of attractive heroines who are bound to inspire lots of Sapphic fantasies among male viewers! 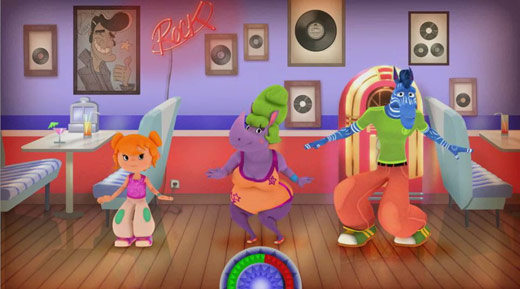 Synopsis: This interactive animation series invites kids to get off the couch and learn how to dance with the aid of energetic and multicultural teachers, the cool Gentleman Bart and the bubbly Miss Boomba.

Stand-Out Qualities: It’s a multiplatform show that includes iPhone apps, websites, online dancing teachers and augmented reality (you can see the demo at www.2minutes.fr/ardemo). Colorful animated teachers invite kids to dance instead of being couch potatoes. They can even solve a problem through dancing; for example, in one episode they are invited to jump on cockroaches that have invaded the kitchen by using flamenco steps! The show also teaches young viewers about the different cultures of the world, through international dances such as Samba, Funk, Hawaiian, Ska, Twist, Swing, etc.