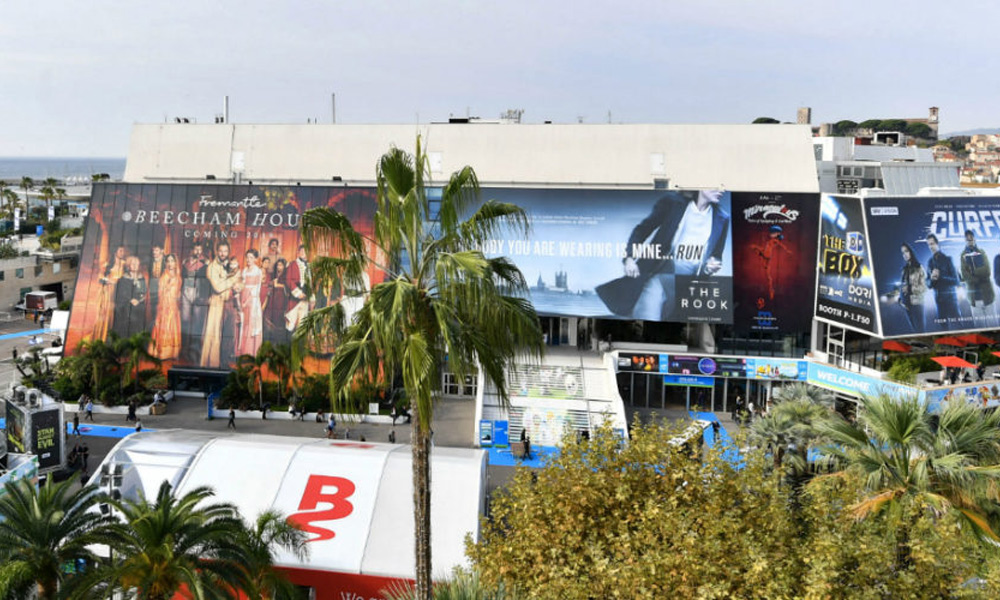 If you work in the animation content business, you’ll probably end up at the MIPCOM market this month, Oct. 14-17 at the Palais des Festivals in Cannes. This annual event draws over 200 exhibitors and 13,800 participants from 110 countries, and there’s a lot of buzz about this year’s edition, which includes a special spotlight on diversity and a toast to MIPCOM Personality of the Year, Robert Greenblatt, chairman of Warner Media Ent. Here is an early sampler of this year’s big market newsmakers. Make sure you visit our website for daily MIP news updates! 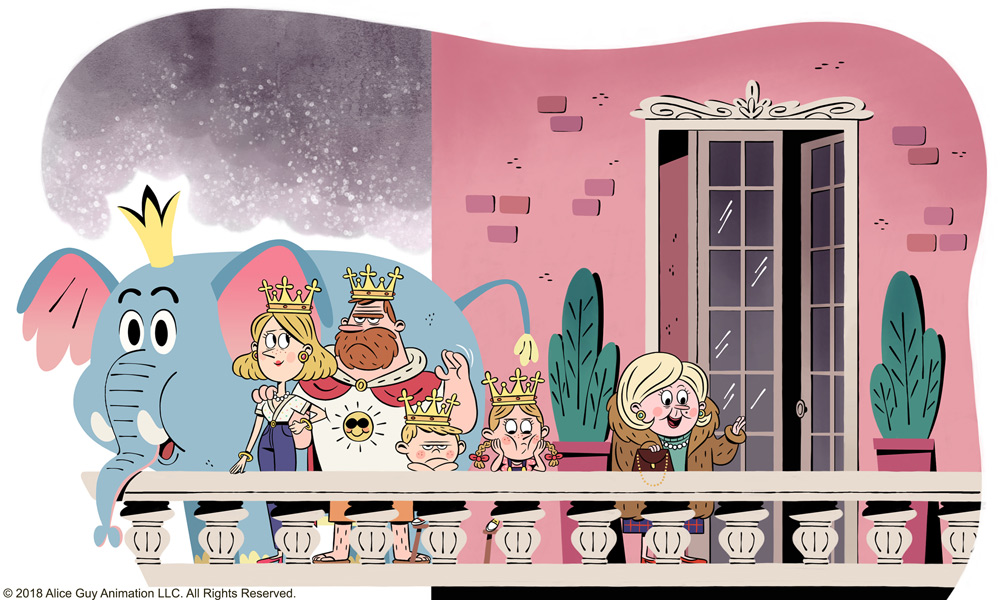 Gaumont Animation is diving into a charming, noble animated new show: The Royal Family. Based on the popular book series by Christophe Mauri and Aurore Damant, the 52 x 11’ 2D show centers on the optimistic King Albert, his thrill-seeking Queen Victoria, eight-year-old Princess Alice and five-year-old Prince Harry Jr. as they take care of their royal duties while making time to enjoy adventures in their modern metropolitan city.

“Christophe Mauri and Aurore Damant’s successful book series,has offered us a brilliant opportunity to expand upon these playful and unique characters and we are excited to bring this enchanted animated series to children and families around the globe,” says Kimberly Dennison, VP of creative development at Gaumont’s Animation & Family. “The Royal Family is a delightful reminder that so much of our everyday life provides for fresh and marvelously amusing experiences, especially from the perspective of a family who marvels at each daily chore as a brand new and exciting adventure.” 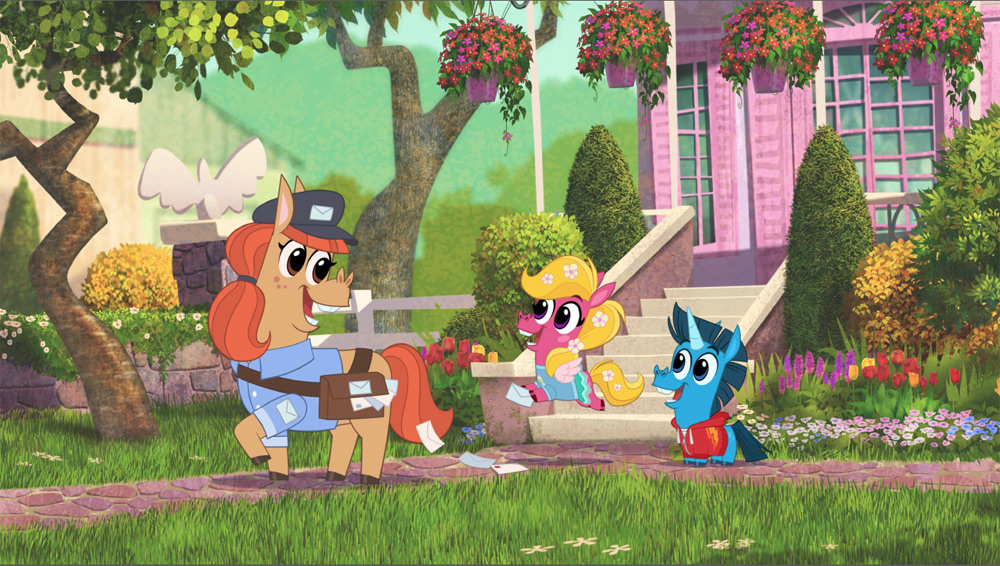 You know some major fun is in store when a unicorn and a pegasus decide to hang out together. That’s what happens in Nelvana/Corus’ Corn & Peg, a fun CG-animated 20 x 22’ show that will be making the rounds at MIPCOM this month. Aimed at preschoolers, the show finds Corn and Peg working together to make their town of Galloping Grove a better place. The show focuses on a social-emotional curriculum that highlights empathy and kindness, and a school readiness curriculum emphasizing colors, math, directions and health and wellness.

“Corn & Peg is a feel-good show and we love seeing these two do-gooders gallop around their city to help their neighbors,” says Nina Hahn, Nickelodeon’s senior VP of development. “It is funny, smart and it brings in a really positive message to kids. We’re really happy to be bringing a second series soon to Nick Jr.”

A Girl on a Galactic Mission

A young girl and a cute alien form a fantastic friendship in Agent 203, a zippy new series produced by Toon2Tango, Mondo TV and V House Animation. The 52 x 11’ CG-animated show, which targets six- to nine-year-old audiences was created by Damjan Mitrevski of V House Animation, will be looking at broadcast presales at MIPCOM. The series centers on curious and adventurous heroine Zoe, whose life is turned upside down when she meets an alien named Ulav in her home’s garage. She soon discovers that her long-lost mother was a secret intergalactic agent, and with the aid of Ulav, she sets out to find her mom and follow in her footsteps to save the world.

“Agent 203 is an awesome combination of different genres — adventure,drama and comedy,” says Jo Daris, CCO and exec producer at Toon2Tango. “It’s passionate, exciting and funny with a strong female lead, but it also appeals to both boys and girls. Sometimes you find a story where everything just falls into place: This is one of those stories.” 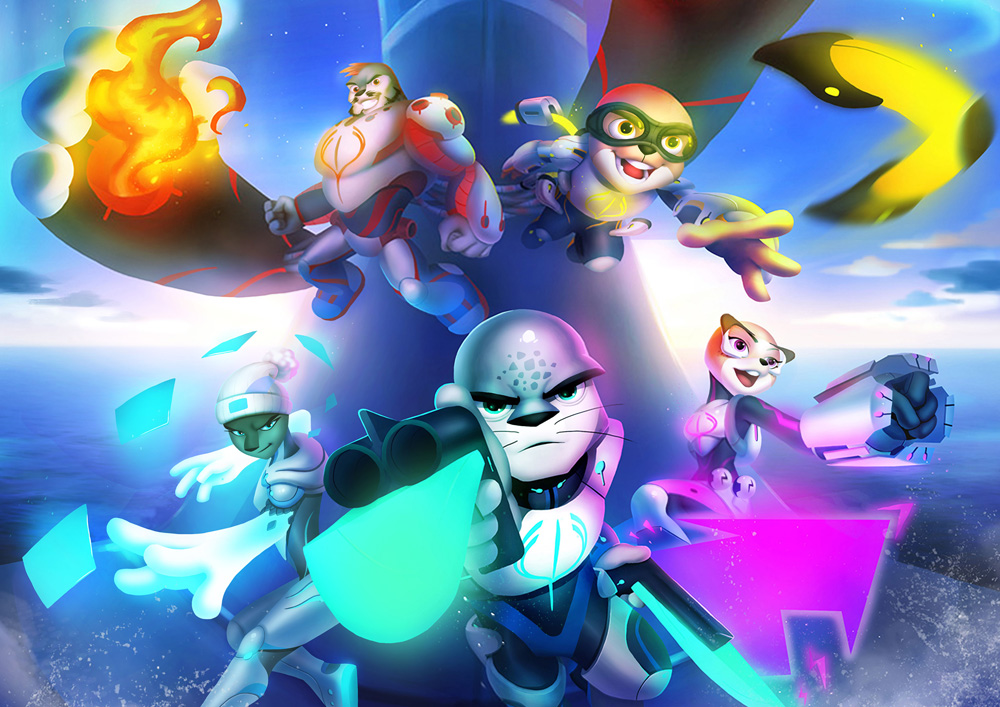 Indie kids and family entertainment production company, Hoho Entertainment is developing new animated series titled Seal Force 5, with Caldera Creations. Created by Paul and Rob Caldera, the show follows the adventures of five arctic seals who have been mysteriously mutated into humanoid form! (Wait…what?), and have created an elite special team to prevent the evil Order of Eden, which is pushing the world to the edge of ecological disaster!

“We were looking for an animal that is both adorable and funny yet also fit for action, but isn’t already a pop culture icon— and seals were the perfect choice,” explains Paul Caldera. “From there, the idea of using Seals as Navy SEALs seemed like a ready-made match for the action/comedy animation genre — and we’re delighted to have found another great match in Hoho to help us bring our ideas to fruition.” 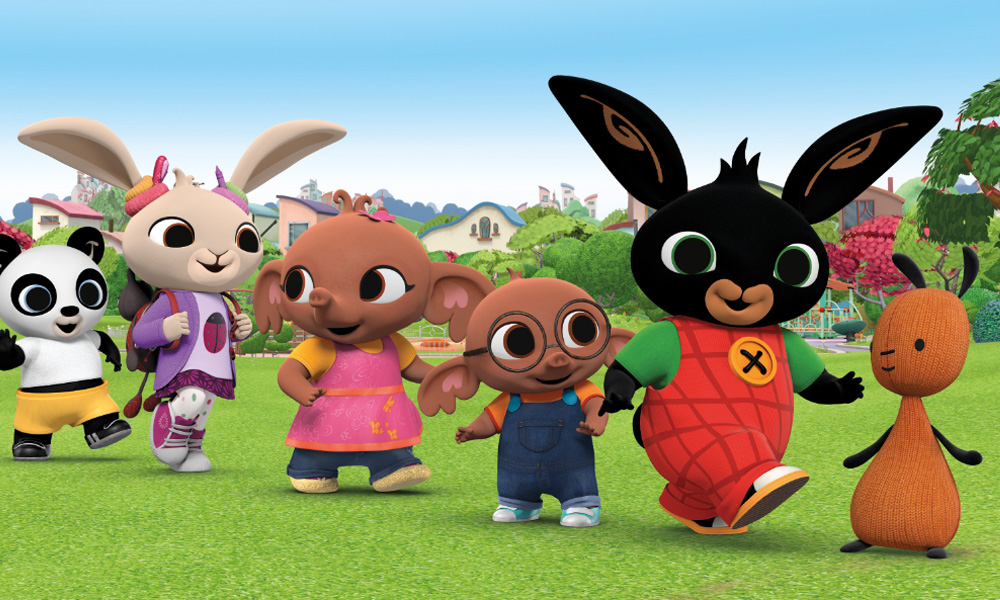 Acamar Films and the BBC are planning 26 more episodes of their hit animated preschool show Bing. The new season is set to air on CBeebies and BBC iPlayer after Oct. 31, and

BBC has also relicensed the original 78 episodes, bringing the total number of episodes to 104. The BAFTA-nominated show, which is produced by Acamar Films and Brown Bag Films, follows the joyful, messy life of a preschool bunny (based on Ted Dewan’s book series). Ever since it was introduced five years ago, the show has found a huge fan base all over the world.

Mikael Shields, CEO of Acamar Films notes, “We are delighted to continue our long partnership with the BBC; it has been a treat to get back into Bing world with our writing-team, as well as with our amazing ensemble cast. We’re all excited to show these new episodes to our highly discerning audience.” 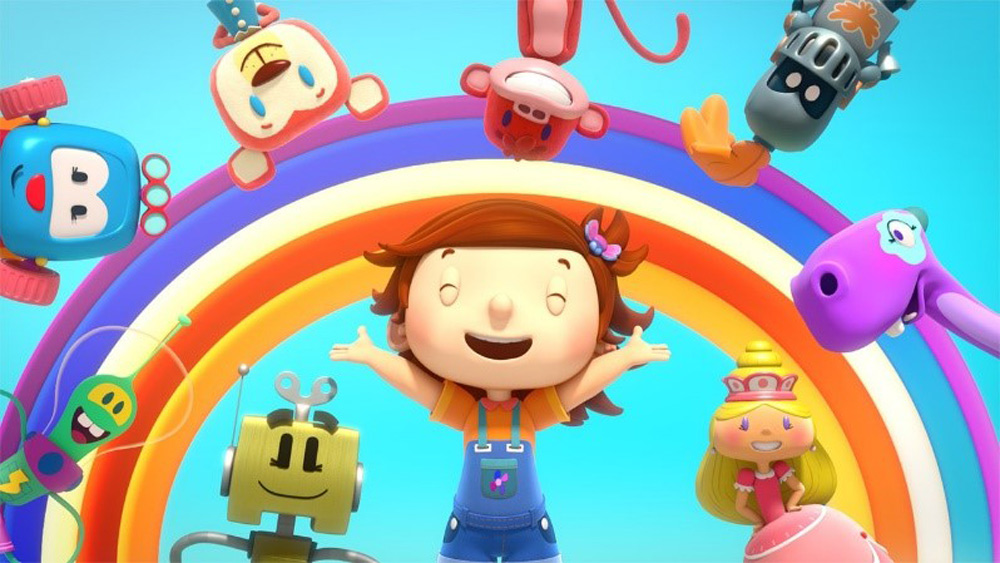 France’s Superprod Animation and Spain’s kids production company Planeta Junior have announced a new partnership to distribute, license and produce premium kids and family programs worldwide. This alliance kicks off with Helen’s Little School (52×11’). Superprod Animation (France) and Muse Entertainment (Canada) are producers of the show that currently airs on France Télévisions and TV5 Monde, Télé Québec, TFO, Knowledge Channel, MTVA in Hungary, C+ in Poland, Discovery Kids in Latin America. The series is also available in China on TENCENT and other digital platforms, through deals secured by UYoung, and in a growing number of territories in Asia.

The following project, That’s Joey! (52×11’), is an animated comedy series based on the comics created by Thierry Coppée and published by Delcourt, with over 3.7 million copies sold throughout the world. The series is produced by Superprod Animation (France) and coproduced by Planeta Junior, Digital Graphics (Belgium) and Atmosphere Media (Germany). That’s Joey! is in production for French free TV broadcaster M6. The first episodes of That’s Joey! will be available at MIPCOM.

A Triple Treat from Winsing

Leading Chinese animation company Winsing, will be bringing several new shows to the MIPCOM market this fall. The preschool show GOGO Bus (26 x 12’, 78 x 13’) centers on Gordon, a talking A.I. school bus which can transform into other vehicles while driving kids to their nursery school. Another big title for the studio is Herbal Master which tells the story of a young recruit who has to save his younger sister from a strange and ferocious beast. Also on tap is Lion Dance, a creative new show about a former dancing star who finds himself involved in a traditional lion dance culture!

As Echo Gu, VP of Winsing notes, “The success of our shows GG Bond and Doby and Disy, as well as our plans for further exciting new properties, such as GOGO Bus, builds on our very strong market in China with brands that will have a universal appeal. 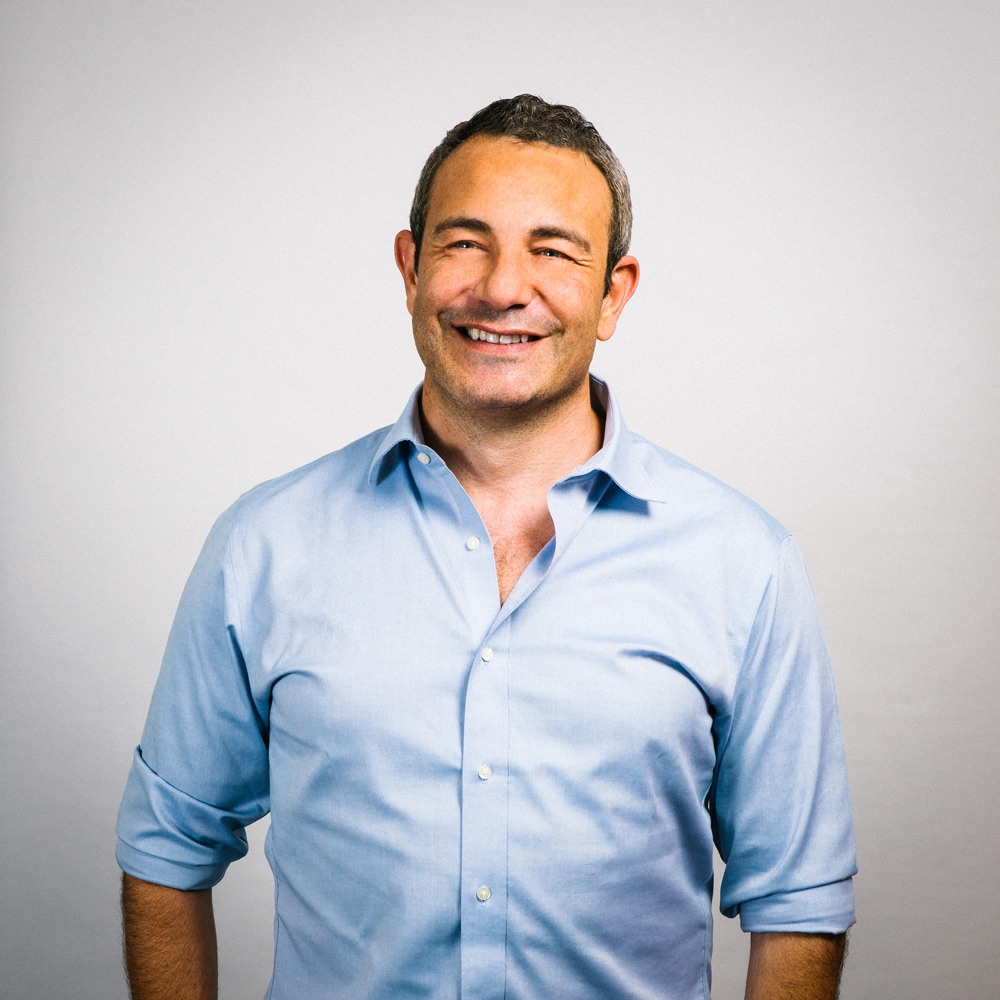 Insider Perspective: On Being an Indie Producer in 2019
By David Michel

In order to describe what it’s like to be an independent producer in 2019, we have to reflect upon how the definition and perception of a “producer” has profoundly evolved in the last decade.

The once eye-rolling expression “Everybody wants to be a Producer” has changed to “Everybody CAN be a Producer.” The advancement of technology has enabled anyone with an idea to create content and share it with others instantly on a multitude of platforms. Anyone with a phone can shoot, edit and share content. Anyone can call themselves a producer. Anyone can join the party.

However, being able to monetize and become successful at making a living out of content creation is becoming increasingly difficult for indie producers worldwide.  Acquisitions, mergers, limited resources and increased competition have made our jobs increasingly difficult which makes standing out amongst a crowded space even more necessary to survive in this industry and economy.

In my experience as a producer, in order for our team to compete in this saturated market, we make a conscious effort to create high budget, premium content that is fairly niche. It’s a risk but one worth taking as our show Find Me in Paris about a time traveling ballerina, has successfully sold internationally and is now in its third season ranking in the top 3 spots on various platforms. There’s no time to bask in the success though, as we have to think of the next show and the next, next and so forth for safety.  In other words, as producers, we have to be even more steps ahead of ourselves while keeping up with the ever-shifting audience and being in tune with how, what and when they consume content.

What is like to be an independent producer in 2019?  It’s both frightening and amazing at the same time, but hopefully we’ll keep coming to that party!

David Michel president and founder of Cottonwood Media, and Managing Director/CEO of Federation Kids & Family. He is the producer of Find Me in Paris, Squish, The Ollie & Moon Show and Around the World. 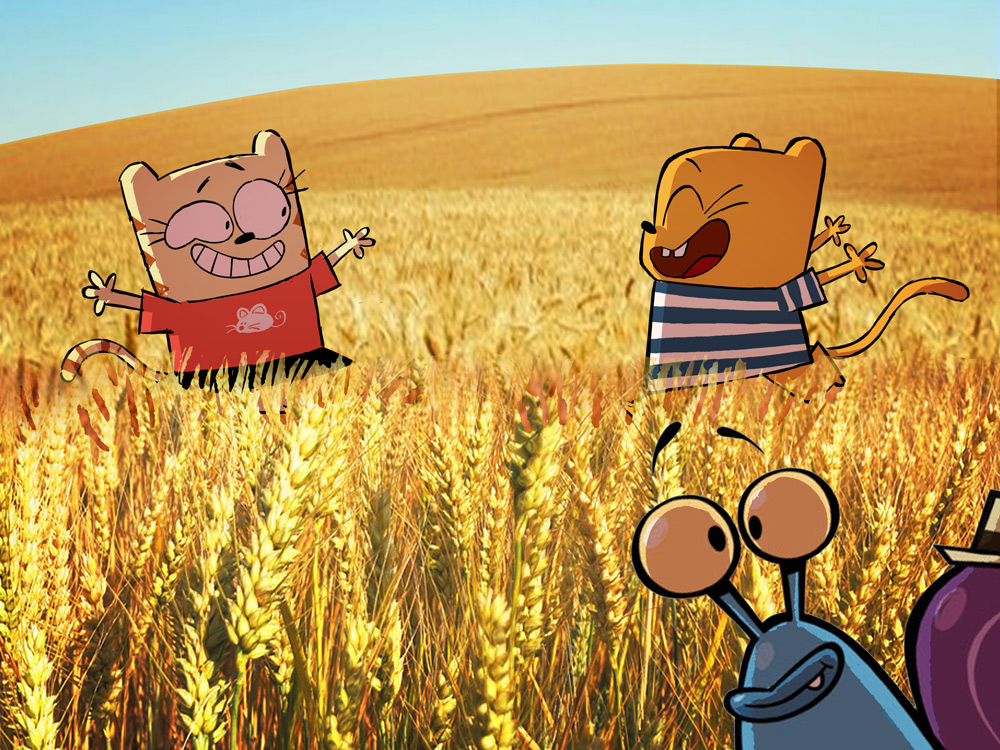