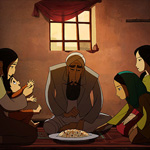 Having released a rundown of programming highlights for the 2017 edition back in September, organizers of the Manchester Animation Festival are putting on the finishing touches ahead of the Nov. 14-16 event. Tickets are already selling out for sought-after screenings (including Don Hertzfeldt’s World of Tomorrow Episode Two, Tehran Taboo, The Breadwinner, My Entire High School Sinking into the Sea and The Big Bad Fox & Other Tales), panels, masterclasses and more.

Festival Director Steve Henderson says: “We’re looking forward to bringing Manchester a reflection and celebration of what has proved to be a very strong year for the animated art form, for a third year. Tickets are selling incredibly fast, across all the events – screenings, masterclasses, panels, the lot! We’re so excited for what we’re sure will be an amazing event”

Details of informative festival session highlights below. The full program, ticks and more info is available at manchesteranimationfestival.co.uk.

MASTERCLASS: THE BREADWINNER
Tuesday 14th November at 19:00, Cinema 1, HOME, Approx. Runtime 60 mins
Oscar nominated visionary studio Cartoon Saloon’s Technical Director Mark Mullery will give a behind the scenes look at the making of their new adaptation of The Breadwinner based on the book by Deborah Ellis. The film is receiving considerable critical acclaim ahead of its release, and will preview exclusively at the festival.

IN THE FRAME: BREXIT AND THE FUTURE OF BRITISH ANIMATION
Wednesday 15th November, at 12:00, Cinema 1, HOME, Approx. Runtime 60 mins
What does Brexit mean for the animation sector? The future of the animation sector will be investigated by industry experts Helen Brunsdon (Director of Animation UK) and Agnieszka Moody (Director of Creative Europe Desk UK).

VR & AR MASTERCLASS: NEXUS
Wednesday 15th November at 15:20, Cinema 1, HOME, Approx. Runtime 60 mins
Innovative animation studio Nexus reveal their inner working and uncover how they create engaging stories that go hand in hand with craft and ingenuity. Joining us from Nexus will be Claire Cook, Senior Producer and Curator for film and interactive projects, including VR and AR. Nexus will be with us to speak about interactive storytelling, with insight into how they made VR experience Rain or Shine with Google Spotlight Stories; Wilderness Wiggle which allowed pediatric patients at the Alaska Native Medical Center to become part of a storybook, and AR app Gruffalo Spotter, which brought a real forest trail to life using the beloved children’s cartoon.

FELLOWSHIP AWARD: JOSH WEINSTEIN
Thursday 16th November at 12:00, Cinema 1, HOME, Approx. Runtime 70 mins
Josh Weinstein has spent his career putting words into the mouths of some of television’s most beloved characters having worked on The Simpsons, Futurama, Gravity Falls, the new Danger Mouse as well as showrunning the locally made Strange Hill High. The 2017 Fellowship Award will be picked up by Weinstein, who takes time out of his busy schedule showrunning Matt Groening’s brand new sitcom Disenchantment to join us for a look back at his incredible career.

IN CONVERSATION: OFF THE LEASH: COMIC TO SERIES
Thursday 16th November at 13:45, Cinema 2, HOME, Approx. Runtime 75 mins
Based on the popular pup-centric comic strip Off the Leash has found fans worldwide. Now Cheshire-based animation studio Factory has taken artist Rupert Fawcett’s creation and created an animated adaptation on YouTube. In 2012, Fawcett created Off the Leash, a cartoon series that follows dogs of every shape, size, and breed, and their thoughts and conversations in various hilarious situations. First published on Facebook, fan numbers recently reached 865k, and the drawings have gone on to spawn a bestselling series of books and merchandise. Fawcett is joined in conversation by Factory’s MD Phil Chalk (Clangers, Newzoids, Scream Street).

PANEL: THE WORLD OF IVOR WOOD
Thursday 16th November at 10:15, Cinema 1, HOME, Approx. Runtime 60 mins
Take a trip down memory lane as we explore the magical work of the master of British Children’s Television. Ivor Wood created such beloved works as Postman Pat, Charlie Chalk and was the animator behind The Wombles and Paddington Bear. Alongside his wife and collaborator Josiane Wood, and experts Tom Sanders and Joseph Wallace, we explore the works of the great man. There will also be a screening looking at a collection of Ivor’s treasured works, and there will also be a very special opportunity, exclusive to festival pass holders, to meet The Herbs!

IN CONVERSATION: KAY BENBOW – QUEEN BEEBIES ADVENTURES IN ANIMATION
Thursday 16th November at 18:00, Cinema 2, HOME, Approx. Runtime 60 mins
After three decades in television CBeebies controller and champion of animation Kay Benbow leaves her post at the BBC, join us for a look back and celebration of her finest work. Under Benbow’s leadership, CBeebies has evolved into a multi-genre, multi-platform offering and remains the UK’s most popular channel for the preschool audience. This success has been recognised by BAFTA with CBeebies named Children’s Channel of the Year three times since 2011.