The Malaysian government announced a new set of initiatives and production support in to develop its creative industry at the Cannes Film Festival and Market his week. The National Film Development Corporation Malaysia (FINAS) has launched a new series of initiatives to help the country become a focal point of film and digital content across the region.

Director General of FINAS – Mohd Naguib Razak, who leads the Malaysian delegation to Marche du Cannes this week, was recently been appointed by the Malaysian Ministry of Information, Communications and Culture to strategize and spearhead FINAS and promote, develop and facilitate film productions in Malaysia for domestic & international growth.

Among several announcements made by Razak during Marche du Film 2012 was the introduction of the “Film in Malaysia” Incentive, which will help both local film producers as well as foreign producers using Malaysia as a location for their film production and post-production. Both local as well as foreign film productions, including feature films, animation, documentaries, television productions and commercials, will be eligible for a 30% cash rebate on audited in-country spend, as long as they qualify the minimum spend criteria of RM5 million (approx. USD 1.6 mil) in-country spend for foreign productions and RM2.5 million (approx. USD 830k) for Malaysian productions. The soon to be launched “Film in Malaysia” Office will be ready to receive and process advance applications, during pre-production, from October 1st, 2012 and the rebate disbursement will commence from February 1st, 2013.

FINAS also announced the launch of the International Film Festival of Malaysia (IFFM), which is billed as the most ambitious and wide-ranging showcase of local and international films in Malaysia. The first edition of the festival will be held this year from Nov. 10-18 in Kuala Lumpur. Attending filmmakers will participate in master classes and question-and-answer sessions, and visiting industry professionals, including directors, producers, actors, programmers, critics, scholars, distributors, and agents, will share their insights in panel discussions that will consider both the art and the business of film. The festival’s artistic director is the highly respected critic and programmer, Dennis Lim. 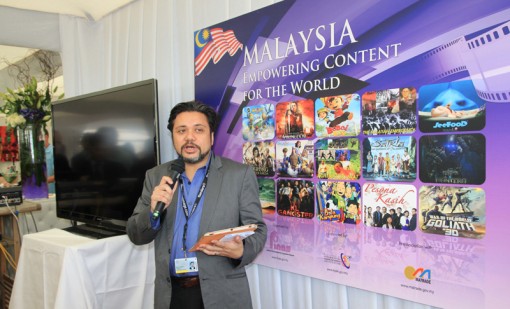 Mohd Naguib Razak, director general of FINAS, makes an announcement
at the Creative Malaysia reception at the 2012 Cannes Film Market