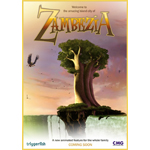 Visitors to this year’s edition of the famous film festival and market at Cannes will have a chance to win a trip to South Africa, courtesy of the studio behind the 3D animated features Zambezia and Khumba.

Cinema Management Group will hold a raffle at Cannes, with the winner receiving an all-expenses paid trip to Cape Town, South africa, to visit Triggerfish Animation, where both feature films are in production.

“Coming off the domestic and international success of Rio, we feel we have an incredibly strong action-adventure animated feature for the whole family with Zambezia,” says CMG chief Edward Noeltner. “Blending African-themed original music, wonderful colorful bird characters, humor, action and a heartfelt storyline, we believe Zambezia will be the talk of Cannes as we will be screening 20-plus minutes of fully rendered 3D footage and give buyers a sneak preview at the full feature as a work in progress.”

Set in the spectacular African Zambezi River Valley, Zambezia draws on this unique natural environment as its inspiration which can be seen in the quintessentially African elements of the film. The film’s hero character, Kai (a young Falcon) leaves his remote outpost against his father’s wishes to join the prestigious Hurricane air defense flyers that patrol the skies keeping Zambezia safe. Kai’s father goes after him but is captured by the notoriously evil Budzo, a giant lizard who has conspired with the scavenging Marabous to take over Zambezia. Kai learns of his father’s capture and finds himself at the center of the deadly plot. If Kai is to save Zambezia, he will have to learn that not all battles are won with fast and fancy flying.

Here’s a promo for Zambezia:

Also taking advantage of its unique African settings is animated feature Khumba about the eponymous half-striped zebra which is blamed for a lack of rain by the rest of his insular, superstitious herd and must embark on a daring quest to earn his stripes. In his search for the legendary waterhole in which the very first zebras got their stripes, Khumba meets a quirky range of characters, and teams up with an unlikely duo: an overprotective wildebeest and a self-obsessed ostrich. But before he can reunite with his herd, Khumba will have to come face to face with Phango, a scary leopard who controls the waterholes and terrorizes all the animals in the Great Karoo.

Noeltner and Dene Anderberg, VP of sales and operations, will be available in Cannes at their office in the Palais des Festivals, Lerins S 15.