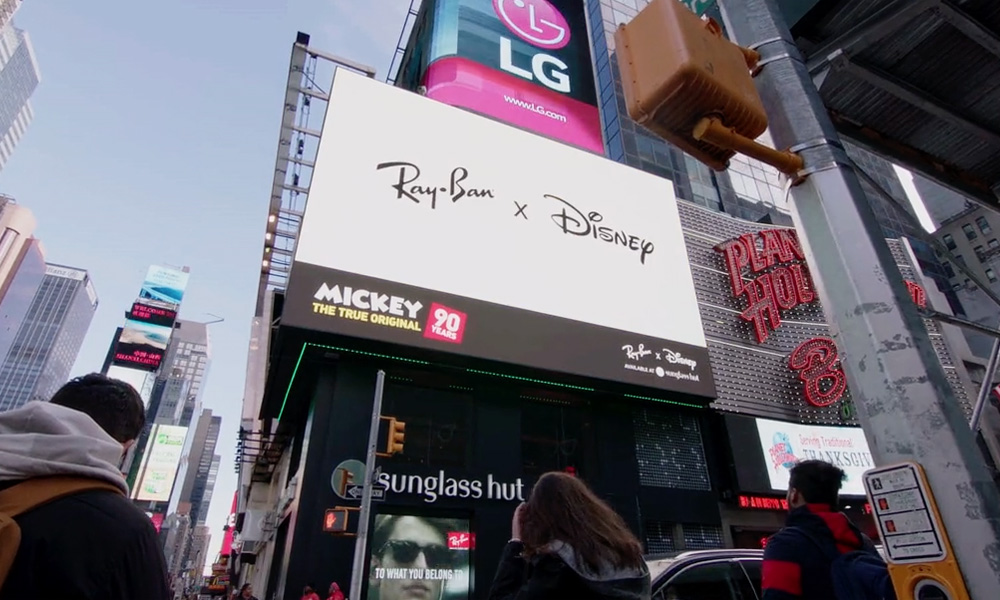 In addition, leftchannel’s Ray-Ban + Disney celebration animation will play at a variety of venues including the web and in stores throughout the holiday season and into 2019. The project promotes the Mickey Mouse graphic adorning the inside of the Wayfarer shades, sketched by Disney Master Artist Jeff Shelly.

Click here to see the leftchannel’s work in action at Times Square.

leftchannel’s founder and Creative Director Alberto Scirocco says the challenge was adapting their animation to multiple formats, a complex effort that Scirocco says is part of the foundation on which he and his creative team have built a highly-regarded reputation for experiential animation. According to Scirocco, leftchannel’s animation for the celebration on the massive Times Square billboard will be more complex than the other formats because of the sheer size of its panels, which means it needs to be much more active and dynamic to make the level of noise necessary to achieve the intended impact.

With two major vintage, iconic brands collaborating, another challenge was to design 22 seconds of animation that would meet the expectations of both companies. “It’s a delicate dance and you’ve got to make it fun and playful but you still have to satisfy two completely different brand voices at the same time,” Scirocco says. “We’re animators at heart and we love the topic,” he says.

Disney’s Mickey Mouse birthday celebration coincides with the launch of a three-month, immersive experience called “Mickey: The True Original Exhibition” in Chelsea that will run through Feb. 10, 2019. The exhibition will pay homage to Mickey Mouse’s influence on pop culture and art over the past 90 years. The Disney-branded Ray-Ban Wayfarer sunglasses will be available at Disney theme parks and Sunglass Huts beginning November 8, 2018.

You can learn more at leftchannel.com.