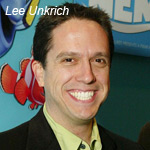 This weekend in Sydney, Australia the debut event of this year’s GRAPHIC Animation Festival, “Pixar: Behind the Screens” will kick off the fest at the iconic Sydney Opera House and feature multi Academy Award-winning Pixar director Lee Unkrich.

Unkrich will be taking GRAPHIC audiences on an exclusive behind-the-scenes look at Pixar Animation Studios, guiding fans through 25 years of the studio’s groundbreaking work in computer animation with a look at the journey from storyboard to big screen and exclusive previews of upcoming Pixar films. As part of the celebration of Pixar returning to Sydney, where much of Finding Nemo takes place, the studio will be giving away a limited edition of Finding Nemo “fun packs” to select attending families. The packs include the new 2D and 3-D Blu-rays (available Dec. 4 in the U.S.)