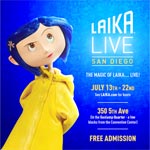 Oscar-winning animation studio LAIKA returns to San Diego’s historic Gaslamp Quarter this weekend with a new LAIKA LIVE exhibit from Friday, July 13 to Sunday, July 22 — coinciding with the city’s Pride celebrations and the Comic-Con mega-event. Building on the success of last year’s initial installation, the studio is setting up at a new location at 350 Fifth Avenue with three times the space available to showcase a mesmerizing array of props, puppets and sets from acclaimed stop-motion films Coraline, ParaNorman, The Boxtrolls and Kubo and the Two Strings. Visitors can also see the hero puppet and a set from the upcoming Missing Link. And, entry is free!

Further highlights of this pop-up museum of puppetry include demos of the innovative technology used in LAIKA’s films, fan art, prize drawings for a pair of “Coraline Dunks” shoes from Nike, social media activations, LAIKA merchandise for sale (including brand-new items and limited edition Coraline goodies), giveaways and more. LAIKA President & CEO Travis Knight will lead a Facebook Live tour of the exhibit and participate in an autograph signing with a soon-to-be-announced special guest on Saturday.

Visitors will also have access to curators explaining the LAIKA filmmaking process, and have a chance to pose for photos with costume characters, including the debut appearances of Coraline and Other Mother (Coraline celebrates its 10th release anniversary next year) and Mr. Link from Missing Link! Returning mascots include Norman and Zombie Judge (ParaNorman), Fish and Sparky (The Boxtrolls), and Kubo, Monkey and Beetle (Kubo and the Two Strings).

More info and updates on the studio and LAIKA LIVE available at www.laika.com. 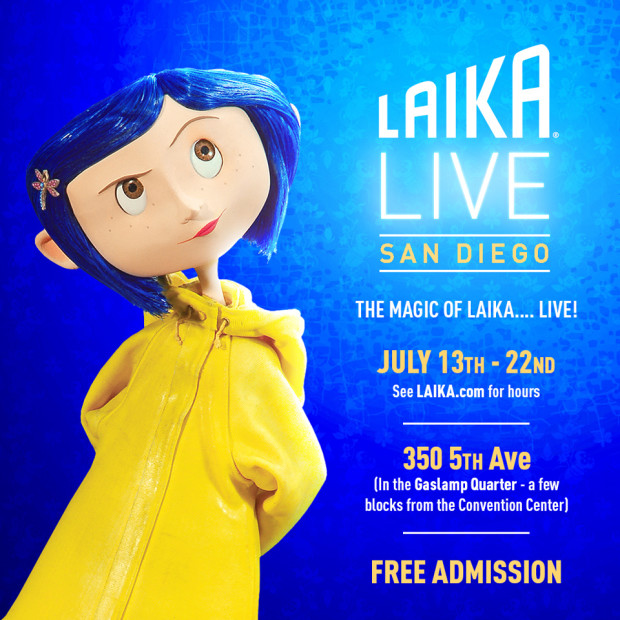