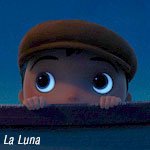 L.A. Shorts Fest kicks off next week with the unquestionable highlight for animation fans being the North American premiere of the new Pixar short film La Luna, followed by a special presentation on the making of the film by director Enrico Casarosa.

The keynote presentation will include  a look at plenty of the original artwork created for the film, which is expected to be attached to the studio’s 2012 feature release, Brave.

La Luna had its world premiere last month at the Annecy Festival.

Here’s how the studio describes the short:

La Luna is the timeless fable of a young boy who is coming of age in the most peculiar of circumstances. Tonight is the very first time his Papa and Grandpa are taking him to work. In an old wooden boat they row far out to sea, and with no land in sight, they stop and wait. A big surprise awaits the little boy as he discovers his family’s most unusual line of work. Should he follow the example of his Papa, or his Grandpa? Will he be able to find his own way in the midst of their conflicting opinions and timeworn traditions?

This film is the first directing assignment for Casarosa, who’s been at Pixar since 2002.