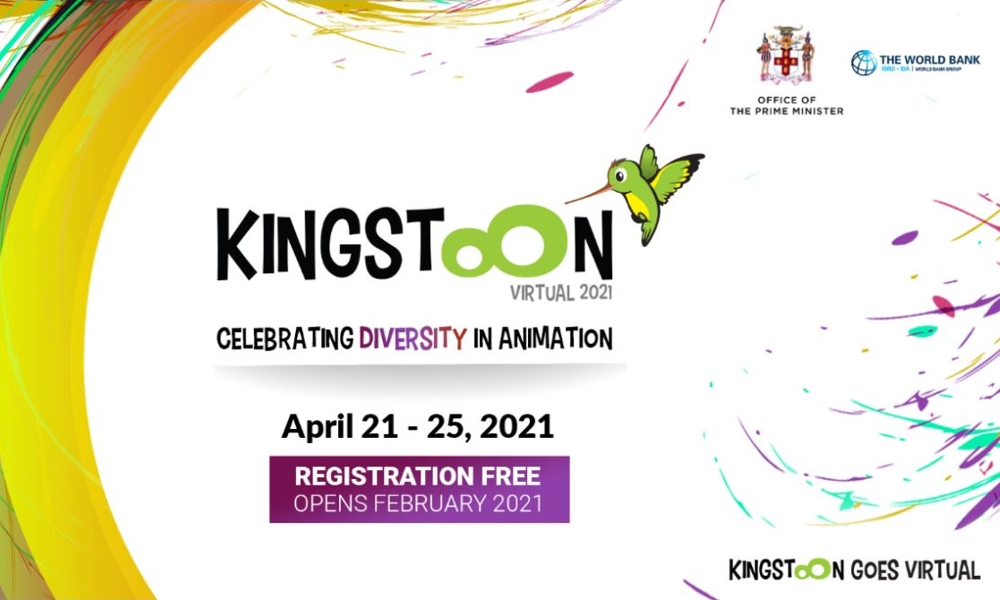 Jamaica will host the fourth edition of KingstOOn Animation Festival from April 21-25, 2021 — completely free and 100% Virtual! Organized by the Government of Jamaica in collaboration with the World Bank, this unique event is aimed at positioning Jamaica as the “Animation Hub of the Caribbean” and showing the global animation community the strides made by Jamaica’s animation industry and the untapped potential of Caribbean creatives.

Animation Magazine caught up with Robert Reid (Animation Specialist, Youth Employment in the Digital and Animation Industries Project, Office of the Prime Minister) to learn more about what the island event has in store for virtual attendees.

Animag: Can you tell us a little bit about your plans for the 2021 edition of the festival?

KingstOOn 2021 will culminate in an Awards Ceremony on April 25, 2021, where the winners of all competitions will be announced and presented with awards and prizes by sponsors and organizers. This will be followed by a virtual ‘Jamaican Cocktail Reception.’ 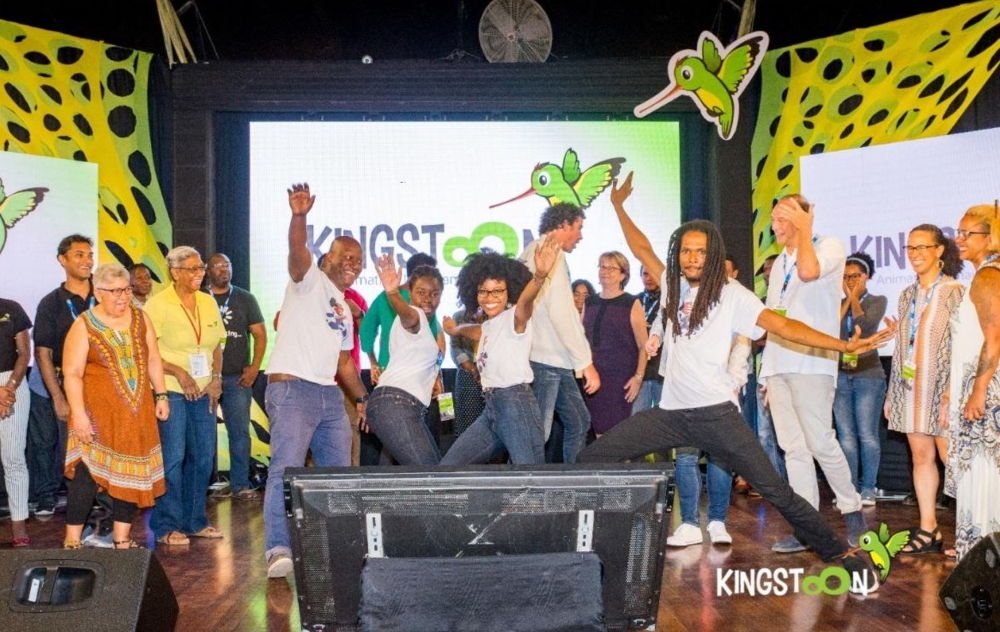 First Place winners of the Pitch Competition celebrating at KingstOOn 2019

What do you think makes this animation festival different from others around the world?

Strides are being made in the global film and animation industry towards increasing diversity and inclusivity. Major studios and networks are putting a lot of effort into showcasing stories that are more diverse and inclusive. Since around 2019, there has been an increased number of box office hits that focus on these themes. For example, the multibillion-dollar successes of The Black Panther, which had significant African influence, and Spider-Man: Into the Spider-Verse featuring an Afro-descendant superhero. These are but two examples of the growing appetite for diverse and inclusive stories and content.

There is great scope for increased representation of groups that have largely been under-represented in film and TV, including the stories, values and culture of Afro-descendant people. KingstOOn seeks to be the niche conference, marketplace, and film festival for this … and what better place than Jamaica. 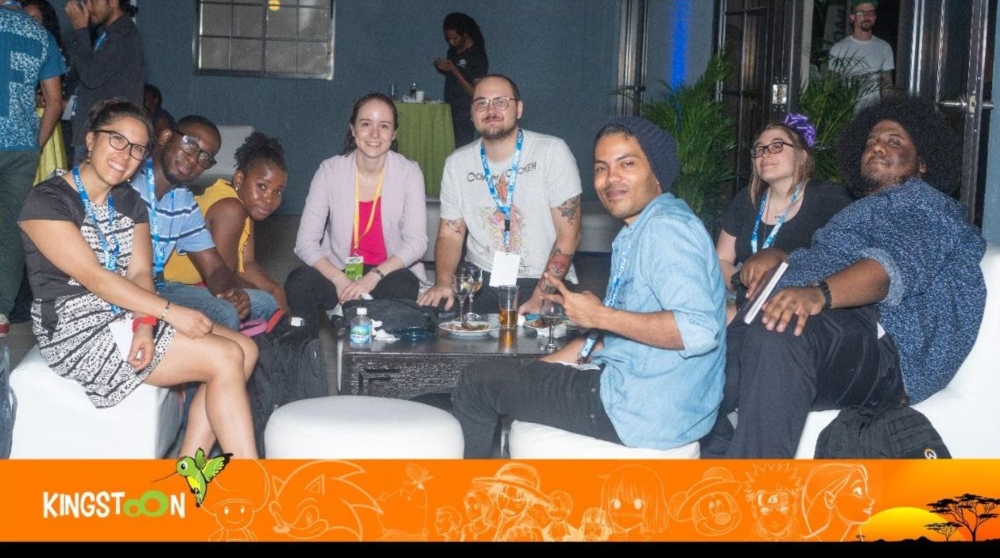 At the end of a hard day’s work, it’s time for fun at the networking cocktails at KingstOOn.

What is the major focus or theme for this year’s programs?

Margery Newland, YEDAI Project Manager, Office of the Prime Minister: Under the banner ‘Celebrating Diversity in Animation,’ the event is poised to make its most significant impact to date by telling the stories that have gone untold for far too long. We anticipate participation of people of diverse cultures, from all over the world, in KingstOOn 2021.

How is the government supporting this event and the animation industry as a whole?

Jamaica is still in the early stages of developing it’s animation industry, and KingstOOn forms part of a larger framework being built out by the Government of Jamaica, with support from the World Bank, which aimed at accelerating the pace of growth.Through the Youth Employment in the Digital and Animation Industries Project, affectionately called YEDAI, there is government support for to training in animation, business development, market attendance and the development of a comprehensive strategic plan and policy framework for the sustainable development on the industry.

Following the first KingstOOn Festival in 2013, top Jamaican colleges and universities have rolled out several training programs aimed at building the skilled labor force required for the industry. Since then, approximately 1,300 Jamaicans students have been trained at various levels in animation. Among these, The University of Technology Jamaica (www.utech.edu.jm) offers a four-year Bachelor’s Degree in Animation Production and Development; The University of the West Indies (www.mona.uwi.edu) offers a three-year Bachelor of Fine Arts in Animation; and the Edna Manley College of the Visual and Performing Arts (https://emc.edu.jm) offers a four-year Bachelor of Fine Arts in Animation.

While these institutions provide broad-based training, the YEDAI Project has over the past six years offered more intense training in specialized areas of 2D and 3D animation. Over 50 high schools in Jamaica (and across the Caribbean) introduce students to the subject at an earlier age through the Caribbean Examination Council’s ‘Animation and Game Design’ curriculum, which was officially launched at KingstOOn 2016 (www.cxc.org/subject/animation-game-design).

In collaboration with the Jamaica Promotions Agency (https://dobusinessjamaica.com), the YEDAI Project provided support to local animation studios and creative entrepreneurs. The initiative comprised masterclasses on the business aspects of running an animation studio as well as preparation for and attendance at key markets such as MIPCOM and Kidscreen. At the markets, Jamaican studios benefited significantly from the learning and networking opportunities. Several animation studios are ready for business, including Listen Mi Animation Studio (www.listenmi.com), Liquid Light Digital (www.liquidlightdigital.com) and Night Vision (http://nightvisionmedia.com).

The Jamaica Animation Nation Network (https://animationjamaica.com) is an active community of freelancers that has regular networking sessions, competitions, training and job opportunities. Here are portfolios of some of Jamaica’s finest illustrators and animators who were also winners of past KingstOOn competitions:

The Jamaican Animation Industry Working Group comprises technical experts who contribute to the development of the industry and provides advice to the government as needed, in developing activities and initiatives that are aligned with industry needs. Despite the strides made by the local industry, key issues remain to be addressed that will positively affect the growth of the industry, including tax incentives for local animation studios and productions, as well as a comprehensive roadmap for sustainable growth.

Finally, tell us why you encourage animation students and professionals to tune in to KingstOOn in 2021?

We invite you to enter the competitions and tune in to the conference in 2021. Given the increase in demand by major broadcasting companies for more diverse and inclusive content, the opportunity exists now more than ever to ride that wave. Entries are currently being accepted for the competitions, and interested persons should keep the theme ‘Celebrating Diversity in Animation’ in mind. We want the entries that we will receive this year to reflect these ‘untold stories’ from under-represented groups, and so we want to see characters reflecting the Caribbean people, and Afro-descendant people in general, because, if we don’t tell our stories, somebody else will, and they might not tell it accurately properly, and so it is our duty to give a true representation of our people, our stories, our values, our culture.