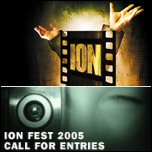 The ION Int’l Animation, Games and Film Festival will return to Los Angeles this fall and organizers are looking for submissions of both animated and live-action short films, short documentaries, game trailers, music videos TV spots, movie trailers and films made for mobile devices.

More information on the festival can be found at http://www.ionfilmfest.com. Submission information is available at http://rs6.net/tn.jsp?t=tedzalbab.0.vqtdclbab.9uoz7yn6.1546&p=

http%3A%2F%2Fwww.ionfilmfest.com%2Fsubmitfilms.html. The submission deadline is July 31. Volunteers are also needed and will receive free screening passes.

More than 100 films, including U.S. and world premieres, will screen during the ION Int’l Animation, Games and Film Festival, taking place October 28-30, 2005, in Hollywood. Questions about tickets, passes or group discounts can be directed to festival@ionfilmfestival.com or (310) 360-8333.

Bilibili announced that it will launch 33 new animation titles in 2021 at Made By ...

A Monster Mash for Lord and Miller Is there anything Phil Lord and Chris Miller can’t ...

This past September, mo-cap creator Rokoko introduced its highly efficient and responsive Smartgloves, a hand- ...